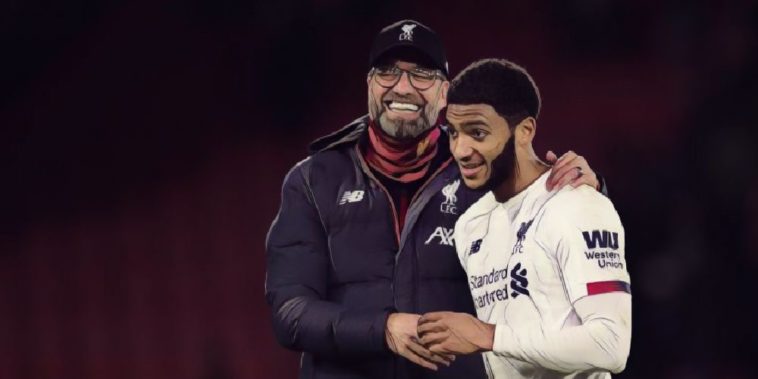 Joe Gomez has called Jurgen Klopp a ‘good human being’ and revealed why he feels that he owes the Liverpool manager ‘a great deal’.

Gomez has flourished under the guidance of Klopp in recent seasons and has played a key role in the club’s record-breaking start to the current campaign, the England international forming part of the division’s best defence as the Reds close in on an elusive league title.

The 22-year-old has now opened up on his relationship with the charismatic German, revealing an incident towards the end of last season which gives an insight into Klopp’s rapport with the first-team squad at Anfield.

Liverpool were enjoying a warm-weather training camp in Marbella last May ahead of their Champions League final meeting with Tottenham in Madrid, though Gomez’s preparations would prove difficult as he awaited news on his heavily pregnant partner, Tamara.

Gomez was desperate to be involved in their European showpiece having missed the previous season’s final defeat to Real Madrid through injury, though during the trip to the Costa del Sol, the defender would receive news that the birth was ‘getting close’.

Gomez has now revealed Klopp’s response to his dilemma, admitting he owes a lot to his manager for his compassion and support in both his personal and professional life.

“I said, ‘Boss, I think it’s getting close.’ He said, ‘Joe, fly home. If you can come back, then come back’,” Gomez told The Athletic.

“Other managers might look down on you a bit for something like that, whereas he makes things easy.

“The labour was pretty long, so in the end once the team came back I just joined training at Melwood. But I sent the manager a picture when Kyrie was born and he was happy.

“I feel like I owe him a great deal, not just as a manager but as a person,” Gomez added. “We’re blessed to have someone that’s a good human being, aside from being a good man-manager and the passionate, knowledgeable person that everyone else sees.”