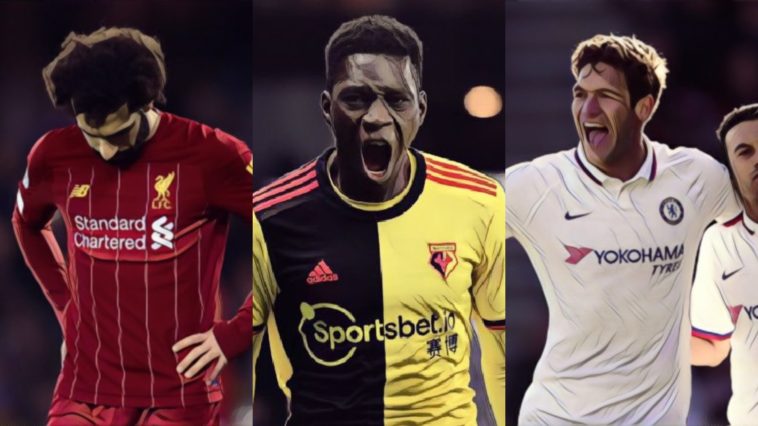 It was never going to be anything else other than Liverpool losing their unbeaten run against the 19th-placed team in the league, was it?

It had been one year, one month and 27 days since the Reds last tasted defeat in the Premier League, and we were all starting to wonder if they would ever lose one again, but Watford were worthy winners at Vicarage Road.

The Hornets were by far the better team, punishing the visitors for a series of mistakes and coming away with the biggest win of the season.

There were also the incredible scenes at Goodison Park, as Carlo Ancelotti remonstrated with referee after his Everton side were denied a potential winner that was ruled out by the VAR for offside. The decision was made because Gylfi Sigurdsson was deemed to be active in the phase of play and in David De Gea’s line of sight as it goes in.

The Toffees boss was incensed by the decision that denied his side, who were the better team in the second half, all three points, and earned a red card in the process. It was great viewing for the cameras. The Italian topped it off by giving a polite wave to the Everton fans as he trudged off the pitch. Delightful.

Chris Kavanagh has a horrible way about him. Treating Ancelotti like a petulant child. We’ve all experienced this attitude – from a copper or bouncer or traffic warden who may not be right but has the position of authority to be a rude dickhead pic.twitter.com/Aq1iHQZGJg

Ismaila Sarr showed his compatriot Sadio Mané how it’s done after the Senegalese sensation provided two goals and an assist during Watford’s shock 3-0 defeat of heretofore undefeated Liverpool. Sarr didn’t put a foot wrong on Saturday evening in the kind of performance that will go down in club folklore.

The boy has ice in his veins 😎

Jamal Lewis scored a terrific half-volley daisy cutter combination to give Norwich City a massive 1-0 win over Leicester City on Friday. Is the great escape on?

Sebastien Haller put in a much needed top-class performance in West Ham‘s 3-1 win over Southampton, scoring his first goal in eight league games. But it was his rabona chip, which beat the defensive line to set up Michail Antonio for a shot at goal, which really caught the eye. That’s the good stuff.

Aaron Ramsdale made a terrific close-range save in the second-half of Bournemouth‘s encounter with Chelsea on Saturday, keeping the score at 2-1 to the home side. Although the match would ultimately end in a draw, the Cherries have the young goalkeeper, who has been a revelation this season, to thank for keeping them in the game.

Christian Benteke missed a great chance in front of goal against Brighton on Saturday, but it was topped by Wilfried Zaha somehow not putting the ball into an open goal. To be fair to the Ivorian international, the ball from Cenk Tosun was overhit and he had to shoot from an acute angle, but his reaction to the miss says it all; he really should’ve scored.

Luckily for him and Benteke, Crystal Palace won anyway thanks to a Jordan Ayew strike.

Chelsea have been struggling for shots lately with both Tammy Abraham and Christian Pulisic suffering injuries in recent months. So who else to turn to, but Marcos Alonso? As per Opta, Goalonso‘s 19 goals are the most of any defender in the past four seasons. His defending is questionable at times, but there is no doubting his attacking abilities – he’s the South London outfit’s top scorer in 2020.

Saturday night’s clash with Watford was Liverpool’s most error-laden performance in a long time, but Trent Alexander-Arnold took the biscuit with his misplaced pass in the 72nd minute. The right-back is usually so assured on the ball, but he had his worst performance in a red shirt at the weekend, completing zero of his 10 attempted crosses and creating no chances whatsoever.

The 21-year-old offered up the host’s third goal on a plate as his pass to Alisson was intercepted by Sarr, who set up Troy Deeney to complete a horrendous night for the champions-elect. It feels harsh to single out Alexander-Arnold when so many mistakes were made by the entire team, but his howler neatly sums up the kind of night Liverpool had.

No need to wait for #MOTD…

Back on Merseyside, meanwhile, the howlers were in plentiful supply at Goodison Park on Sunday. David De Gea‘s attempted clearance was blocked by Dominic Calvert-Lewin and went straight into the Man United net. There was a huge slice of luck in the goal for the striker, but the goalkeeper really should have gotten rid of the ball much quicker than he did.

At the other, Jordan Pickford let in a Bruno Fernandes effort from just outside the box that was definitely within range for him to save. Does the Everton man have a case of Joe Hart Syndrome? A highly-touted young English ‘keeper with exemplary shot stopping skills from close range but with a tendency to miss saveable long-range shots…

A double Donkey for Newcastle United and Burnley for serving up one of the most boring matches we will see all season at the weekend. The Magpies, in particular, are a dire team to watch under Steve Bruce and have been all season. The Premier League will not miss them if they go down.

If there is a positive to be taken from this ‘spectacle’, then it’s the fact that Neil Warnock, who was a part of the Soccer Saturday panel on Sky Sports, was forced to sit through the two teams that best exemplify his style of football. Serves him right.

Read: Tino Asprilla could win a match on his own – if he felt like it