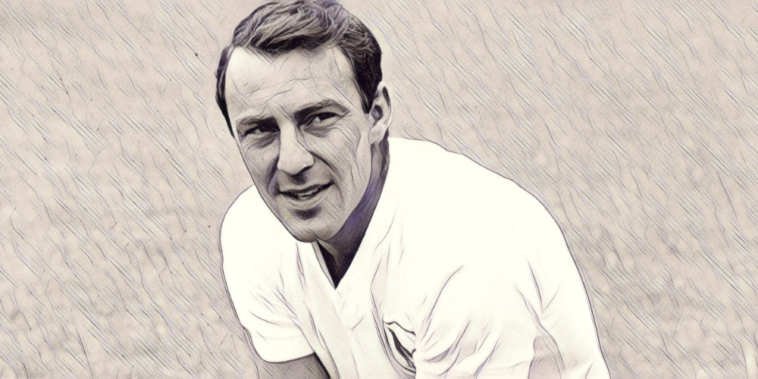 Jimmy Greaves, who sadly passed last week at the age of 81, was, is, and will very likely always be, the greatest of all English centre-forwards.

His goal-scoring figures demand a double-take even from those already well-acquainted with them. His prolificacy across a 14-year career truly staggers.

In 661 appearances for Chelsea, AC Milan, Tottenham, West Ham and England the train driver’s son from the East End of London scored 466 times. For England alone, he scored 44 goals in 57 games. No player has ever found the back of the net more often in England’s top division – a remarkable 357 strikes, often from a left foot feared throughout the world – and for six seasons running he would have won the Golden Boot had the award been around in his day.

It is tempting perhaps to explain away all of these off-the-scale stats with the era in which Greaves tormented goalkeepers on a weekly basis. After all, there is that well-known Boxing Day set of fixtures from 1963 that is shared around social media every Christmas chockful of ridiculous score-lines such as 10-1 and 8-2. Teams seemed to score more when football was in black and white and defenders were not the tactically nuanced athletes they are today.

Yet, though this is very possibly true then you compare Greaves and his phenomenal record against the very best finishers of the 50s and 60s and nobody else comes remotely close. Not Denis Law, not John Charles, and certainly not Geoff Hurst, who famously took the place of the injured Spurs striker in 1966, going on to achieve a World Cup immortality that feels fated for one player and immeasurably cruel on the other.

We are deeply saddened to learn of the passing of Jimmy Greaves at the age of 81.

Jimmy was part of our @FIFAWorldCup-winning squad and scored a remarkable 44 goals in 57 games for the #ThreeLions.

All of our thoughts are with his family, friends and former clubs. pic.twitter.com/CetXiwD25l

In terms of natural ability, these legendary figures matched or even surpassed Greaves. In terms of goal-scoring prowess, however, he resided on his own unique planet.

So, what was it that set him apart from his poaching peers? Unsurprisingly there was an unerring accuracy to every shot he fired; so often low, so often guided artfully beyond the keeper’s reach into the far corner. Acceleration too was a huge part of Greaves’ game, an attribute enhanced by his favourite trick of playing possum, lingering in sight of the last man and supposedly no threat before bursting into life over 10 yards. Few saw the whole picture with clearer, sharper eyes than Greaves. He knew when to go, to the millisecond.

Also, though we may be at risk of lapsing into whimsy here, there was an insatiable hunger to his foraging. He was obsessed with scoring. He was forever ravenous for the next one. It was a hunger born of being born during the Blitz, his family home flattened to rubble when he was just six weeks old.

Aligned to all this; feeding that hunger, was a childlike glee at the sight and sound of a heavy leather ball rasping the back of a net and years later, we would see this rare quality again as it lit up our television sets with the long-retired star now ‘Greavsie’, a national treasure no less, messing around with his mucka, Ian St John. Running for seven years on ITV, Saint and Greavsie revolutionised how football was covered in this country, its blend of irrelevancy and insight now a standard in sports broadcasting. The show’s approach has been copied a million times since. It has yet to be bettered.

In between Greaves the clinical forward and Greavsie, the avuncular joker, there were dark times. A sustained and horrendous descent into alcoholism that led to copious pints and a bottle of vodka a day being consumed. His health deteriorated, his life deteriorated, but remarkably at his lowest ebb the part-time rally driver – that’s a whole other story – dug deep and somehow managed to reinvent himself. At his lowest ebb Jimmy Greaves went from being a great player to a great man.

RIP to a footballing legend pic.twitter.com/djAesKXIrt

In the early 70s, he made his ordeal public during a repressed decade when people didn’t typically share. And he said the following: “All I can do is hope that over the rest of my life I can show that people who are lost in the world, through one problem or another, that you can overcome it and you can succeed.”

With the help and patient assurance of his beloved wife Irene he eventually did, and the world was soon a happier place on a Saturday lunchtime.

For Chelsea, AC Milan, Tottenham, West Ham and England, Jimmy Greaves never missed. He will be greatly so.