Fantasy Premier League is just about to hit a hectic period, so in this week’s FPL column we are providing some tips and advice on the best chip strategies going forward.

The business end of the FA Cup and the return of European football will add to the fixture congestion currently felt by every Premier League team right now, as more midweek games will be added to the calendar.

With the fifth round of the cup taking place on the weekend of 20 March, there are only three matches penned in for gameweek 29 at the time of writing. We do not yet know when the other seven matches will be played, although we have a pretty good sense that it will be during gameweek 26.

We know this because there is virtually no room elsewhere in the calendar for them to go. Although we don’t know who will be playing twice that week, rest assured that GW26 will be a mega double gameweek (DGW).

It is speculated that the rescheduling of fixtures will be announced just ahead of the gameweek 25 deadline, although that is by no means guaranteed. In lieu of a confirmed fixture list, Ben Crellin has created this spreadsheet detailing the possible matchups and when they will happen: 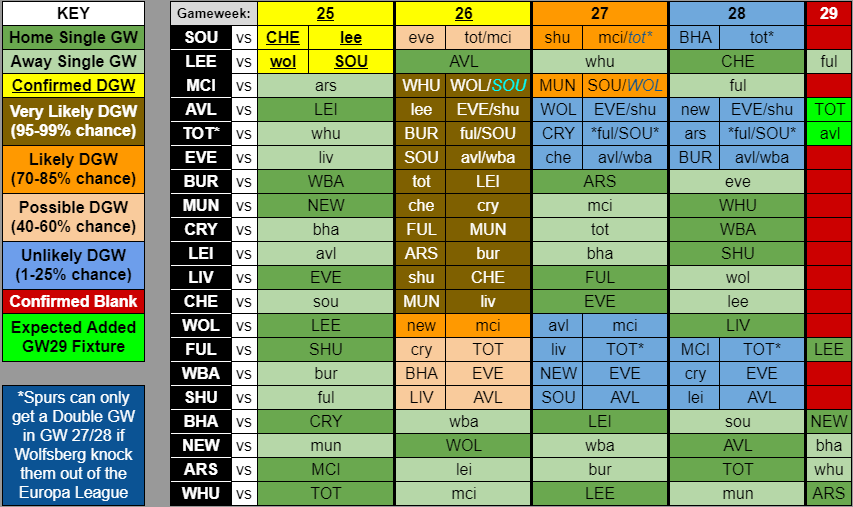 The above graphic may be a bit overwhelming to dissect, but the main takeaways are: GW26 will be a huge DGW, there may be doubles in GW27 and GW28, and there will be a lot of blanks in GW29 with the possibility of Tottenham and Aston Villa being added to the lineup.

This allows for a little more clarity when planning ahead in FPL. But remember: you can only use one chip at a time!

The best chip strategies for DGWs in Fantasy Premier League this season:

Every strategy is contingent on what players you have in your squad – and what chips remain in your deck – so it’s important to note that these strategies are not a one size fits all solution. You need to assess your squad, see what you need, and go with the plan that suits those needs.

A large percentage of FPL managers will have already used at least one chip so far this season, but if you’re like me, then you still have all of your chips intact. We’ll now run through when is the best time to use the second Wildcard (WC), Triple Captain (TC), Bench Boost (BB) and Free Hit (FH):

With so many fixtures in GW26, it makes perfect sense to activate the BB then. In order to set your squad up with 15 players who have two fixtures that week (essentially 30 players!), then using the WC ahead of the GW25 deadline is optimal.

Setting up an entire team for just one week can be dicey and leave your FPL team unbalanced for future gameweeks, so you have to keep that in mind.

With so many blanks in GW29 it feels like the ideal time to employ the FH chip. This will allow you to load up on players from the only six (or more) teams playing that week before your team reverts back to its original squad for the following gameweek.

The health warning attached with this strategy is, as already mentioned, the fixtures have not been announced yet. That could leave you totally goosed if you load up on players from particular teams and they don’t feature in GW26.

FPL Podcast: The best chip strategies for the double and blank gameweeks

If you were one of the many FPL managers who activated the BB chip back in DGW19, then you will have to suffice with just the 11 players in GW26.

One way to get the most out of those 11 would be to activate your wildcard, so you can load up your starting lineup with solely DGW players. The added benefit of this would be not having to spend too much on your bench and investing it entirely on starters, unlike those using the BB.

Assuming you still have the FH, you can then activate that in GW29. That said, depending on what players you have at the time you might be able to get away with just eight or nine starters in the BGW.

Alternatively, you can save the wildcard for after GW29, as there will be DGWs during the run-in due to the FA Cup semi-finals (GW32) and the League Cup final (GW33).

If you no longer have your second WC or BB, then free hitting may be the way to go in GW26. This allows you to make as many transfers as you see fit in that particular gameweek before your team automatically reverts back to its original squad.

The benefit of this is that you don’t have to contort your current squad at the expense of future gameweeks and can focus purely on the players that will maximise your potential for points in GW26.

If you don’t have any of the other chips remaining, or simply don’t fancy using them, then triple captaining a player is certainly worth considering.

A DGW is almost always the best time to activate the TC chip, as it gives you double the chance to maximise your points tally. But it’s also very dependent on the fixtures available and the form of the players you are considering using it for.

For instance, Tottenham will likely play Burnley and Fulham or Southampton in GW26, which on the face of it appear to be the most attractive set of fixtures that week. That makes Harry Kane and Heung-min Son particularly good options for TC.

However, this writer is not fully convinced, as Spurs have been out of form lately and if it was indeed Fulham they are playing, then it becomes a lot less enticing. The Cottagers have been quite solid of late and are no longer the whipping boys they were at the start of the season, while Burnley appear to be doing Burnley things again.

Then again, Kane and Son are lethal on their day, so don’t let me stop you from hitting that button if it feels right to you.

Other teams whose players I would consider putting the TC on in GW26: Aston Villa, Everton (if they play against West Brom), Leicester, Man City and Man United.

If you happen to have used all of your chips by now, then it’s probably best to just start praying the run-in to the season is kind to you.

However, as I have written in this column and said on the podcast before, chips are not a solid gold guarantee for FPL. They merely enhance your chances, but it’s all about how you use them.

I have done very well in recent years with the chips because I have chosen my moments carefully. That means knowing when not to use the chips either. Too many FPL managers fritter their chips away because of impulsiveness or desperation.

Keep this in mind if you either don’t have any remaining chips or simply choose to hold them. I came out of GW18 and GW19 with 171 points over the two gameweeks without using any chips, while those who used their FH and/or BB were more than likely left disappointed.

My advice to you is this: