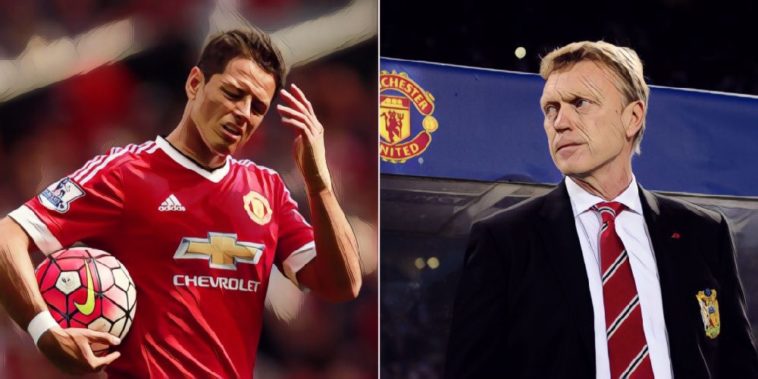 Javier Hernandez has opened up on David Moyes tenure as Manchester United manager, calling Sir Alex Ferguson’s successor ‘stubborn’ and ‘not that humble’ as well as saying he was the cause of a number of player exits.

The legendary Scot has often been praised for his versatile man-management style, a sentiment echoed by Hernandez – who joined the club from Guadalajara in 2010 – despite the Mexican striker often having to settle for a place on the bench.

“Every time he’d do something, for example with myself at half time or after the game or whatever, in the next couple of days he’d want to make sure I hadn’t taken it personally,” Hernandez told Rio Ferdinand’s The Locker Room.

“I’m the manager, we can have drinks, we can hang out, we can chat, but in that part, every single time and he’s the only manager I know who does this, it’s a very important part of his character … [he would tell a player off when necessary].

“I remember [in one match] he brought a player off, he shouted at him but not in a bad way, he answered in a way that was fair, but then the next day you see them chatting, it was incredible, he was very able to separate what is work and what is personal.”

However, his opinions of Sir Alex’s replacement, David Moyes, couldn’t have been more of a contrast – saying his appointment was the cause of the departures of a number of players.

“To be honest, we didn’t have anything personal – Moyes and myself – but it was a mistake that they took him,” he said

“It was a mistake. That was the first mistake that it’s still haunting – not because of him, he’s not a bad manager, but they thought they were going to take the replacement of the boss, of Sir Alex so quick. It’s impossible!

“Not until now. Even Guardiola and Klopp and Mourinho are not at the level of Sir Alex yet. They’re on the way trying to get there. Or Cruyff, those kinds of managers. They’re not there but they’re trying to achieve that.

“That changed some United careers that could have been better. Rafael, myself, Welbeck, Fabio, too – a lot of players that we need to go away to play.”

When asked if Man Utd got rid of them too quickly, Hernandez replied: “Yeah, definitely”, before embarking on another scathing indictment of the former Everton boss, who decided to get rid of the majority of Ferguson’s long-standing backroom staff upon his Old Trafford arrival and offered the striker just six Premier League starts.

“Look, another thing,” he continued. “They brought David Moyes. It’s not about being a good or a bad coach or his ideas – I’m not going to question that.

“The problem is, I don’t understand how it’s possible that you’re not that humble or not clever enough to maintain or at least half of what you’re succeeding, the way he was doing it because he’s the greatest of all time.

“I even went to speak to Sir Alex because he knew I was down. He knew I was going to be sold, not loaned to Real Madrid, and we spoke about it and he told me the same things I was thinking: ‘This is Real Madrid, man…you can last for six months there, or last for a year … a Mexican guy.’

“They had van Nistelrooy, Beckham, Cristiano, myself, Michael Owen. We all played for Manchester United and then Real Madrid. It was incredible. It’s still difficult to believe.

“I look at the way my last year went before I went to Real Madrid went with Moyes and I didn’t play that much and I even went to the World Cup and didn’t start because I wasn’t playing at Man United.

“Look, I can accept being a substitute at Man United. Sir Alex told me that one of his regrets was not to play me more and he told me he was going to speak with Moyes to tell him I needed to play more.

“He said I was an important figure for Man United, he told them he deserves more game time and if you can’t give him that, let him go, let him fly in a good way.

“That’s why he lasted the seven months he lasted. He was so stubborn and he didn’t have that adaptability and that growth acceptance. You need to grow to be in United.”

You can only imagine how ‘The Little Pea’ felt when Moyes rocked up at West Ham in 2017.