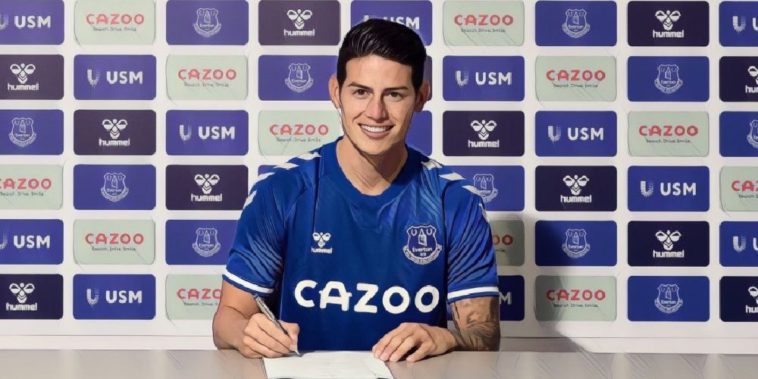 Everton’s summer of recruitment has seemingly signalled a change in transfer policy for the club, with the arrival of James Rodriguez from Real Madrid hoping to inspire a new era under Carlo Ancelotti.

An exciting new era has now been ushered in with the marquee signing of Rodriguez from Real Madrid, the Colombia international once amongst the most expensive players in world football and one who has previously worked under Ancelotti both in Spain and at Bayern Munich.

The signing of the 29-year-old – alongside the capture of Allan from Napoli – indicates a shift away from Everton‘s previously stated transfer policy, Director of Football, Marcel Brands admitting the club’s intention to avoid signing ‘older’ players

“The players we brought in last year were all under 25, so we don’t want to invest big money in players who are older,” Brands said last year.

“Everton is a club that also has to sell players, so it is necessary to get younger players to invest in.

It was not a dream…

Brands’ comments came after the success of his first season signings including both Richarlison and Digne, the duo having established themselves as important figures since moving to Goodison Park.

Last season’s window, however, was a huge disappointment with the likes of Alex Iwobi and Moise Kean particularly poor in their debut seasons at Everton, whilst Jean-Philippe Gbamin made just one league start in a campaign wrecked by serious injury.

The arrival of the experienced Fabian Delph from Manchester City also failed to prove a success and the lacklustre performances of the club’s midfield has seemingly prompted a shift in policy, Rodriguez and Allan both 29-years-old and the Toffees continuing their pursuit of 27-year-old Watford midfielder Abdoulaye Doucoure.

Ancelotti has spoken on Everton’s marquee arrival in Rodriguez, and believes the playmaker can bring plenty to his side after being convinced of the ‘project’ at Everton under the Italian’s management.

“James, as everyone knows, is a fantastic player with a lot of quality and a lot of ability to make assists for the strikers,” he told the Everton website.

“He’s really excited about the project of the club and the fact we want to improve. He was really excited to sign and I didn’t spend time to convince him – he was already convinced.

“Players like James and Allan can help us to be better and we can help them to be better. This kind of connection can be helpful to improve the results, the team and results of this club.”

Rodriguez has agreed a huge wage cut to sign a two-year deal with an option for a third, the star of the 2014 World Cup potentially making his debut a the weekend against Tottenham Hotspur.