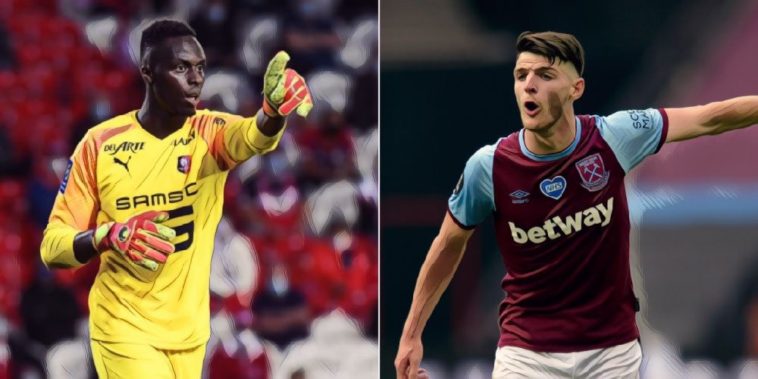 Chelsea’s busy summer of transfer activity is set to continue with a deal reportedly ‘close’ for Rennes goalkeeper Edouard Mendy, whilst the club retain an interest in signing Declan Rice from West Ham.

Frank Lampard’s side have already splashed more than £200m on a host of new additions this summer as they bid to close the gap to the Premier League’s leading sides, though Chelsea’s lavish outlay is showing no signs of slowing down with a new goalkeeper next on the agenda.

According to the Guardian, the west London outfit are now ‘close’ to a deal for Senegal international Mendy, with the 28-year-old nearing an £18.2m move to Stamford Bridge to provide competition for under-fire first-choice ‘keeper, Kepa Arrizabalaga.

The performances of Kepa have caused concern for Chelsea since his world-record arrival from Athletic Bilbao two years ago, the Spain international possessing the worst save percentage amongst all regular Premier League goalkeepers last season.

Lampard had expressed an interest in Atletico Madrid’s Jan Oblak as a replacement but the inability to find a suitor for Kepa – who cost a huge £71.6m when arriving from Bilbao – this summer has led Chelsea to consider more affordable alternatives.

Kepa Arrizabalaga has the worst save percentage in the Premier League since 2018 (60.6%).

According to the Telegraph, interest in Mendy comes on the back of a recommendation of technical advisor Petr Cech, the club believing the shot-stopper can improve a glaring weakness in their new-look side, before they turn their attentions to long-term target Rice.

Rice is a viewed as a player who would help solidify a Chelsea side that conceded more goals than any other side in the Premier League’s top half last season, with widespread reports that Lampard is keen to utilise the 21-year-old – who has played much of his senior career to date in midfield – in a centre-back role.

West Ham, however, are desperate to keep hold of their prized asset and the club’s owners are under huge pressure from the unsettled Hammers’ supporters following the sale of Grady Diangana to West Brom, with captain Mark Noble publicly stating he was ‘gutted, angry and sad’ to see the prospect depart.

Sanctioning the sale of Rice will lead to further outcry at the club and it will likely take a huge bid from Chelsea to convince West Ham to part with the England international at present.