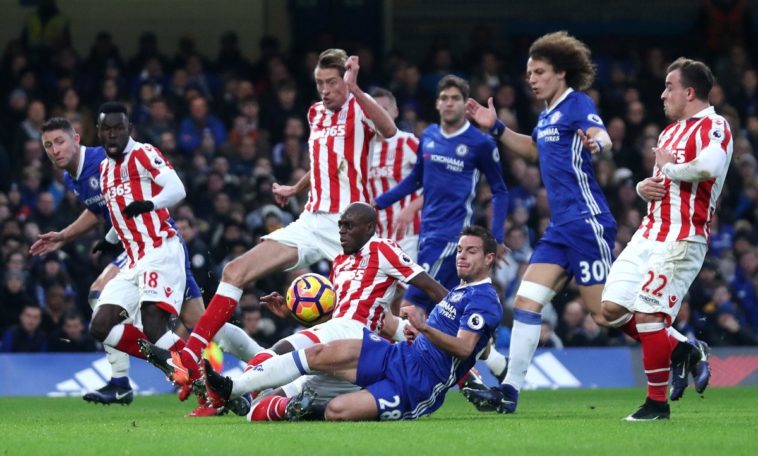 As Chelsea and their new look Italian style back 3 run away with the premier league title, it’s time to ask: are back 3’s the new black?

At the beginning of the season many questioned David Luiz’s return to Chelsea. The defender had become notorious as the centre back who preferred going forward. After several shocking displays for Brazil, including the iconic 7-1 humiliation at the hands of Germany, Luiz was almost a laughing stock amongst the press. But as I write this he has been one of the stand out centre backs in the league this season.

The incredibly unorthodox 3 of Azpilicueta, Luiz and Cahill has been deployed regularly this term to great effect. Conceding a joint lowest 20 goals in the league, Chelsea have been a formidable team to try and break down. As well as the back 3 they have also enjoyed protection in wide areas from the dynamic fullback due of Moses and Alonso.

Kante and Matic have also contributed highly to Chelsea’s impressive defensive record under the defensive knowhow of Antonio Conte.

But it’s not only Chelsea experimenting with a back 3 in the league this season. Many other sides have tried it with varying degrees of success. Stoke City utilised it for the main part of winter using a 3 of Muniesa, Martins-Indi and Johnson. Similar to Chelsea, Stoke also used wingbacks, in this case Diouf and Pieters. The formation was relatively successful, however Stoke have since reverted to their usual 4-2-3-1.

West Ham and Everton also occasionally deployed a back 3. Everton scrapped this following a 5-0 drubbing at Stamford Bridge. Everton brought it back more recently for their 1-1 draw with Stoke but reverted to 4-3-3 at half time. Youngster Mason Holgate was struggling to adapt as a right centre half in a 3.

Other notable teams to deploy a 3 this term have been Sunderland, Watford, Spurs and Hull. Manchester United even used it in their recent Europa League game against FC Rostov.

Whilst it may still seem something of a revelation in England, the back 3 is commonplace elsewhere across Europe. An absolute staple in Italian football, the back 3 is used more often than not.

Juventus – The back 3 masters

The most proven case of this has been the borderline impenetrable Juventus 3 of Barzagli, Bonucci and Chiellini. Helped by the fact they have the experienced Gianluigi Buffon behind them for both club and country, the 3 work incredibly well together.

Juventus have won the league for the last 5 seasons, with the same defence throughout. Does this prove the back 3 is the best way to defend or is consistency in personnel the key? Either way I’m not sure there ever has been or ever will be a more effective and enduring defence as this current Juventus crop.

Obviously the back 3 has good credentials for defending as quite often it becomes a back 5. As Chelsea have shown this term when sitting deep, their 3-4-3 becomes more of a 5-2-3.

But the back 3 can also benefit a team’s offence if used correctly. In addition to their defensive solidity this term Chelsea have also been ruthless going forward. A league second 57 goals, just behind Liverpool’s 58 shows they’ve improved all round since last season’s travesty.

The key to this has arguably been the change in service Diego Costa is receiving. Wingbacks Moses and Alonso remain very wide and put plenty of crosses into the box. The benefit to the width they provide has been the spaces opened up in the middle for Hazard and Pedro. Both struggling for form last term, the tricky pair have been electric, providing plenty of goals and assists.

The back 3 has also contributed to Chelsea’s increase in possession in games this term. As many teams try to emulate the press of teams like Klopp’s Liverpool, the 3 Chelsea centre backs are happy to pass between them and bring the ball from the back with great effect.

Combined with the tireless N’Golo Kante and solid Nemanja Matic, what can other teams do to stop Chelsea? Not a lot by the looks of things this term.
So will the back 3 be the norm amongst the premier league next term? Or do old habits die hard? Let us know your thoughts in the comments.