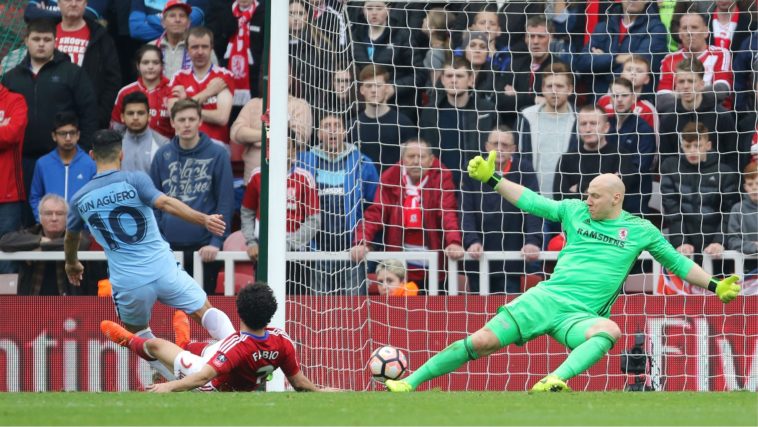 Middlesbrough hosted Manchester City in the early kick-off hoping to shake off their poor run of form. Boro have not won in the league since last December but they were hoping for a possible dream run in the FA Cup.

However, the FA Cup seems like City’s best chance of silverware this season who were hoping to dispose of Middlesbrough with relative ease.

Manchester City put out a very strong lineup and Middlesbrough struggled to deal with City all game. They looked poor defensively, even though they are usually very solid at the back. They also as always created very little going forward. This was not helped by injuries to Gestede and Espinosa forcing Boro in to bring on youngster Dale Fry.

City, on the other hand, were on top form. They opened the scoring inside 3 minutes. David Silva converted Zabaleta’s cross after poor tracking back from Middlesbrough winger Stuani. The next 10 minutes of the game continued to look shaky for Middlesbrough. Boro fell apart at the back and if not for Guzan, Boro could have easily been 3-0 down inside the first 15 minutes.

Middlesbrough did settle into the game eventually with Grant Leadbitter creating a few chances. The most notable of Boro’s chance came when Gestede headed his effort at Bravo who spilt it onto the line. However, Zabaleta cleared the effort. Middlesbrough managed to go in at half time with just a 1-0 deficit but they still did not look like scoring.

The second half saw much of the same. City dominated, Boro created just one real chance when Negredo headed down to Fabio whose shot was cleared off the line by Stones.

Leroy Sane tormented Boro right back Antonio Barragan all game. This eventually led to him setting up City’s second and final goal of the game. Boro keeper Brad Guzan managed to pull off several good saves preventing the scoreline from getting embarrassing.

Barragan 4/10– Struggled to deal with Sane all game which eventually led to City’s second goal.

Espinosa 5/10- Very quiet performance, subbed off due to injury in the 50th minute.

Gibson 5/10- Sloppy marking led to City’s first goal but kept Aguero quiet for most of the game.

Fabio 5/10- Not Fabio’s best performance. Did not cope well with Sterling but did nearly score.

Leadbitter 7/10- Probably Boro’s best player on the day. Only player to create any real chances. Showed passion and determination. Surprisingly subbed off in the 66th minute.

De Roon 5/10- Did not cope well with Silva who could have had a hattrick.

Gestede 5/10- Very isolated up top, did have one good chance but it got cleared off the line. Subbed of due to injury after 26 minutes.

Traore 5/10- another frustrating performance from Traore. Took on many Many City players but the end product was poor again.

Negredo 5/10- Like Gestede he was isolated up top but he set up Fabio for Boro’s best chance.

Fry 6/10- Relatively decent showing from the young centre back considering he has never played against such good opposition.

Ramirez 4/10- Didn’t create much when he came on. Seemed disinterested again.

Bravo 5/10- Kept a clean sheet but spilt the ball which almost led to a Boro goal.

Zabaleta 8/10- Set up City’s first goal and cleared a Boro chance of the line.

Stones 6/10- Had little to do all game. He did clear the ball off line from Fabio’s chance though.

Otamendi 6/10- Like Stones, he had little to do and dealt with what he had to well.

Sane- 8/10- Middlesbrough could not deal with Sane, he created several good chances and got the assist for the second goal.

Silva 8/10- Superb game from Silva, he got the first goals and probably could have had a hattrick.

De Bruyne 7/10- Boro had a hard time dealing with De Bruyne and his great passing. He controlled the game well.

Sterling 6/10- Decent game for Sterling, not as productive as Sane but he did have a goal ruled out for offside.