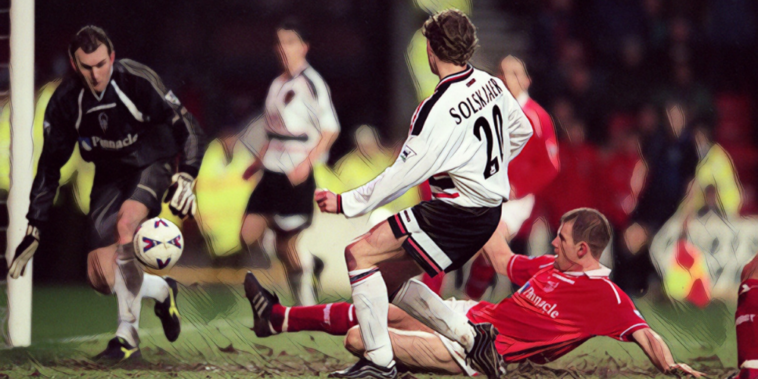 To be deemed as a footballing ‘super sub’ can almost be viewed as a backhanded compliment. It is no doubt a term of endearment for those able to influence games off the bench, but who – for some reason or another – often fail to command an automatic place in the starting side.

Throughout football history there have been many names affectionately dubbed as super subs, though few have seen the label stick to them with such glue-like qualities as Ole Gunnar Solskjaer.

Manchester United fans will forever cherish the Norwegian’s knack for turning games off the bench, never more famously than an outstretched boot to win the Champions League under the Camp Nou lights.

That treble-winning touch ensured Solskjaer’s status as a cult icon in the Red Devils’ history, though his reputation as a game-changer from the bench pre-dated that unforgettable evening in 1999.

Just months earlier, he produced one of the most unforgettable substitute appearances the Premier League has ever witnessed.

The summer arrival of Dwight Yorke from Aston Villa had limited Solskjaer’s chances of a starting role, with the Trinidad and Tobago international forming an almost instant understanding with Andy Cole in attack.

The devastating double-act had cemented their status as Sir Alex Ferguson’s first-choice forwards, with Solskjaer and the experienced Teddy Sheringham providing a more than capable supporting cast.

United travelled to face Nottingham Forest in early February of the 1998/99 season, the latter struggling at the bottom of the division in a season that would end in relegation.

At the opposite end of the table, United were in the midst of a title challenge as the Red Devils sought to recapture the title from Arsenal, having seen the North Londoners claim a domestic double under Arsene Wenger the previous season.

The trip to the City Ground posed few problems for the visitors, despite Forest levelling inside six minutes after Yorke had opened the scoring in the second.

Andy Cole restored the Red Devils’ advantage just seconds later, with both the England international and Yorke helping themselves to braces either side of the break.

Solskjaer – for the opening 72 minutes – had waited patiently for his chance, scanning the game and opponents studiously for potential weaknesses he could exploit if called upon.

With Yorke withdrawn from proceedings he entered the fray, with first-team coach Jim Ryan having outlined his instructions – keep possession, see the game out.

Solskjaer, however, had other ideas.

Keen to make a point to the management team that often overlooked him, he set about on a one-man crusade to issue a statement and inflict embarrassment on a free-falling Forest side.

He took eight minutes to add his name onto the scoresheet, arriving unmarked at the back-post to tap home Gary Neville’s cross. The full-back had scampered forward on the overlap in familiar fashion, before a low ball across the area reached its intended target in Solskjaer.

There was nothing unusual about Solskjaer’s impact from the bench, he had done so before. The conclusion to the game, however, would mean his cameo proved unforgettable.

Solskjaer scored his second – and United’s sixth – with two minutes of normal time remaining, beating the offside trap to race onto David Beckham’s long pass in behind.

His initial chip was thwarted by Dave Beasant, but as the rebound fell back into his path he showed composure and quality to side-step the goalkeeper’s desperate challenge and lash home an emphatic finish from the edge of the area.

Forest had been hopeless but there punishment continued as the seconds ticked towards full time, with Solskjaer claiming his hat-trick – and the match ball – in typically clinical fashion.

Paul Scholes’ delicate pass was lifted into the path of the Norwegian, with the intelligent run of Andy Cole having freed room for his goal-hungry teammate.

Taking one touch to cushion the ball with his left foot, his second rifled an effort past Beasant, the veteran forced to pick out a seventh United goal from the back of his net.

Though the job had been done in truly ruthless fashion, there was still time for one last act from the Red Devils’ ‘Baby-faced assassin’ as he helped himself to a fourth in added time.

Scholes’ miscue in meeting Nicky Butt’s cross saw the ball fall invitingly for Solskjaer inside the area, who made no mistake to roll home his fourth – he had been on the pitch just 18 minutes.

“I thought the finishing was magnificent. Solskjaer was amazing.

“If I ever feel guilty about the teams I pick, it invariably centres around him. He really deserves better. But the fact is he is better than anyone else at the club as a substitute. He can come on and not be disturbed by it; he finds the flow easily.”

As the full-time whistle blew there was a simultaneous sense of despair and disbelief in the stands, the travelling crowd revelling in the formidable showing of their Scandinavian star.

Just six players have ever scored a hat-trick in the Premier League when coming off the substitutes’ bench. Only one has ever hit four.

Solskjaer’s sensational showing was unique and a huge part of the reason the super sub tag stuck, with the Norwegian perhaps the first name that immediately springs to mind when recalling those who thrived off the bench.

Bayern Munich had dominated proceedings and looked set to end United’s treble dream, before Ferguson turned once again to his trump card as victory was snatched from the jaws of defeat.

Sir Alex Ferguson’s side forged a reputation for turning games late on, a never-say-die attitude that was aided by a brilliant back-up brigade. There were arguably none more influential than the sharp-shooting Solskjaer, the Premier League’s most notorious super sub.