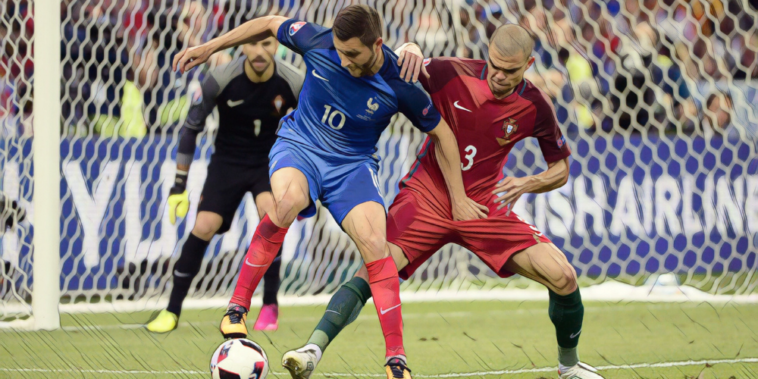 They say your reputation is in the hands of others – you can’t control that. The only thing you can control is your character.

In mythology the trickster is usually portrayed as a devilishly cunning character, one who bends the rules of the game to their will. Throughout history defiers of convention have adopted many guises, across innumerable ancient societies. The Greeks called him Hermes, The Norse named him Loki. Football fans know him as Pepe.

To say that the naturalised Portuguese defender is a polarising figure would be a massive understatement. A seasoned purveyor of the dark arts, his deception of match officials over the years hasn’t endeared him to the global audience. Whether it’s feigning injury, shirt-pulling or simulating fouls, nothing is off-limits when a competitive advantage is at stake. Pepe practised his no holds barred philosophy with relative impunity and the creed served him well, propelling him to the top of European club football. However, as the crude saying goes, karma is a bitch.

In the opening match of the 2014 World Cup, much to the glee of his detractors, Pepe finally received his comeuppance. A trademark moment of madness saw the Real Madrid man headbutt Germany’s Thomas Müller and, after his cries of innocence fell on deaf ears, he was promptly dismissed.

Portugal, who lost the match 4-0, failed to progress from the group stage and Pepe, the villain of the piece, was chastised in the Portuguese press.

Just two years later, with the jibes of his compatriots still ringing in his ears, Euro 2016 offered him the shot at redemption he so desperately needed.

Portugal’s journey to the final in Paris was a turbulent ride, more so than many of us had predicted. A draw in their opener against supposed whipping boys Iceland was followed by an underwhelming stalemate against Austria. In their final group game Fernando Santos’ men fell behind three times against Hungary, only to draw level each time.

That result was enough to see them through to the knockout stage, but only thanks to the newly expanded group format. After dispatching much fancied Croatia in the round of 16 and besting Poland in a penalty shoot out, a 2-0 win in the semi-final against underdogs Wales set up a mouthwatering tie against Didier Deschamps’ France in the final.

Les Bleus, who were pre-tournament favourites, boasted an embarrassment of attacking riches. In Antoine Griezmann they had the player who lit up the tournament, the man who would win both the Golden Ball and Golden Boot awards. With the formidable threats posed by Olivier Giroud and Dimitri Payet (3 goals each) at their disposal, and the partisan home crowd cheering their every touch, the smart money was on a host nation win.

However, the ‘favourites’ tag comes with added pressure and, under the bright lights of the Stade de France, Deschamps’ men wilted. In retrospect, we might have seen it coming. In the hours before kick-off a plague of moths reminiscent of that passage in Exodus invaded the stadium – undoubtedly an ill-favoured omen. Something terrible was about to happen.

Both sides began the match nervously, with neither team showing much in the way of conviction. Seven minutes in a moment came that dictated the course of the final. Disaster struck for Portugal, a tackle by France’s Payet leaving Portuguese captain Cristiano Ronaldo on the deck, writhing in agony. Some claimed it was an act of sabotage, for others it was an innocuous tackle. Nevertheless, Ronaldo’s race was run.

It was almost certainly the death of the final, France would surely win it at a canter now – or so we thought. Before the night was over we’d be reminded of that age-old adage – no individual is greater than the collective.

It would’ve been so easy for the Portuguese to capitulate right there and then but, as it transpired, the injury had a galvanising effect on Santos’ men, one that Pepe summarised in a post-match interview.

“When Cristiano said he couldn’t go on, I tried to tell my team-mates that we had to win it for him. It was tough because we lost our main man and we had all our hopes in him. We poured our blood sweat and tears onto the pitch. We left it all on the pitch for our nation.”

The loss of their main attacking threat was a massive a blow, but not as it turned out a fatal one. After all, to say that the Seleção were a one-man team would be a massive disservice to Ronaldo’s countrymen, particularly the defensive unit. After conceding four goals in the group stage Portugal had shipped just one goal en route to the final.

The defence, consisting of Pepe, Cédric Soares, Raphaël Guerreiro, José Fonte and Rui Patrício, had a steely determination about them. Under the stewardship of Santos, Portugal had become a more tactically proficient and well-organised side. Ironically, they adopted an ethos not too dissimilar to the Greek side that shocked them, and the world, at Euro 2004.

With defensive midfielder William Caravalho dropping into the backline with regularity, Pepe pressing high and Fonte holding in behind, there was little space for the French to exploit between the lines. In frustration, Les Bleus often resorted to speculative long-range efforts. In truth Portugal’s goal didn’t look under genuine threat until a momentary lapse in concentration in the 66th minute presented Griezmann with a guild-edged chance.

The Frenchman’s uncharacteristic miss was followed by another close shave when, in the dying embers of regulation time, André-Pierre Gignac hit the post with the goal at his mercy. With the prospect of a penalty shoot-out looming, the French misfiring and the Portuguese growing in confidence, the host nation’s advantage eroded.

Ten minutes into extra-time Pepe made yet another crucial contribution, this time intercepting two Griezmann passes inside his own penalty area in quick succession. It was a passage of play that epitomised the defensive linchpin’s imperious performance. With penalties just minutes away, and both sides out on their feet, substitute Eder struck a superb winner past Hugo Lloris.

Stade de France stood stunned – but for a pocket of ecstatic Portuguese fans. With just seconds remaining France orchestrated one last chance, but alas Pepe (who else?) was there for the umpteenth time that night to deflect Anthony Martial’s goal-bound effort away and out to touch.

As the final whistle blew Portugal’s players lost themselves in their own individual celebrations – they had just broken new ground. There were no precedents. While the players and fans sobbed, laughed and sang the utterly spent spent Pepe vomited on the side of the pitch.

He had left it all out there – and just a little bit more for good measure. It had been a slog of a campaign wherein Portugal had won just one game in the tournament within the regulation 90 minutes – becoming the first team in European Championship history to go to extra time three times in the same tournament.

🗣️ @Cristiano Ronaldo: "In my opinion Pepe was the best player at the EUROs."

Pepe’s profound impact on the final is reflected in his match statistics. Portugal’s rock made 3 decisive blocks and completed 12 clearances (more than any other player) – 7 of them with his head. His impeccable performance was indeed punctuated by his dominance in the air, with the Real Madrid defender winning over half of his aerial duels (63%). His ability to retain the ball, an overlooked facet to his game, was on full display that evening. Impressively, he completed every short pass he attempted (31) and boasted a respectable long-range passing accuracy of 63%.

The Los Blancos defender was named man of the match for his stout defensive performance in the final, though many disputed that decision, claiming that Rui Patrício was more deserving of the honour. Regardless, the accolade was comparatively meaningless in light of what had been achieved.

The triumph in Paris also secured a place in an exclusive club for Pepe, one populated by players who have achieved European success at club and international level in the same calendar year. He and Ronaldo had bested fierce city rival Atlético, and Griezmann, in the Champions League final just six weeks earlier.

Pepe received high praise from his captain for his performances in both finals, with Ronaldo calling him “the best player at the Euros” and later adding, “it may well have been the best season he’s had since I’ve known him. For me he was without a doubt the best player for Portugal and one of Real Madrid’s best players in the Champions League”.

Portugal, who had won their first European Championship after 35 games at the tournament, forgave Pepe for his past transgressions. His role in an early exit at the 2014 World Cup was now just footnote in history. Of course, for the rest of us, one courageous (and professional) act wasn’t enough to absolve him of over a decade of sins. His legacy as a villain will undoubtedly remain intact, as it has done for players like Sergio Ramos and Luis Suárez.

That being said, it is hard to look beyond the essence of Pepe’s iconic performance. Strip away the tomfoolery and you’re left with a highly adept defender. He was on his best behaviour that night and, astonishingly, was the only Portuguese defender to avoid a caution. There was no ulterior motive in his play, no deceit – just a desire for vindication. Perhaps he simply requires the proper motivation, a personal stake in the outcome, to marshal his impulses.

Pepe’s career defining performance against France helped end his adopted nation’s 82-year wait for their first major title. He was an integral part of a side that won Euro 2016 without losing a single match.

Love him or hate him, Pepe was the outstanding performer that night, the best defender at the tournament and worthy of any veneer of absolution that came his way as a consequence.

Read – Five of the best players from Euro 96