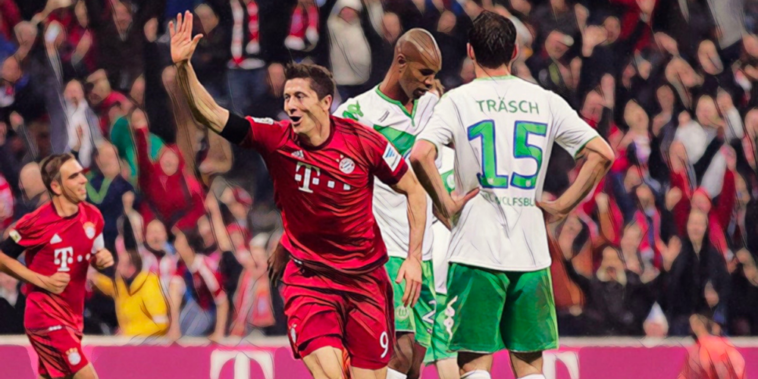 It’s often said that a picture can paint a thousand words and Pep Guardiola’s expression of disbelief was a fitting reaction to events at the Allianz Arena.

Robert Lewandowski’s introduction from the bench had stunned those inside Bayern Munich’s state-of-the-art stadium, a forward already on his way to greatness producing a spectacular show of finishing.

In the space of just nine minutes Lewandowski scored five goals, a ruthless demonstration of his goalscoring genius.

The Poland international was named on the bench as Bayern hosted Wolfsburg in September 2015, having missed the previous clash with Darmstadt with an ankle issue.

The visitors had won the DFB-Pokal and finished as runners-up to Bayern in the Bundesliga the previous season, before beating the league champions in the German Super Cup the previous month.

Heading into the interval, Die Wölfe – unbeaten in 14 games heading into the fixture – were ahead and looking to continue their momentum with an upset in Bavaria.

With his side trailing at half-time, Guardiola turned to his bench. Javi Martinez came on to add solidity in midfield, though the trump card was the introduction of Lewandowski.

The forward had signed from Borussia Dortmund on a free transfer the previous season, scoring 25 goals during a debut campaign that ended with a Bundesliga winners’ medal.

In search of a goal to get his side back into the game, Lewandowski was a good bet, but even Guardiola could not have envisaged his record-breaking impact.

Within six minutes, Bayern were level. Thomas Muller bundled his way into the area and as the Wolfsburg defence desperately sought to make a challenge, the loose ball dropped invitingly to Lewandowski who had the simplest of tasks to turn home.

Sixty seconds later Lewandowski had turned the game around. Afforded space on the edge of the area, his low finish was driven past the despairing dive of Diego Benaglio.

Wolfsburg were rattled and struggled to cope with the wave after wave of Bayern attacks. Lewandowski added a third – sealing his hat-trick, the fastest in Bundesliga history in less than four minutes – after firing home at the third attempt from close range.

Lewandowski’s impact had stunned those in attendance, but an unforgettable show was only truly getting started.

His fourth was a brilliant first-time effort, arriving to meet Douglas Costa’s cross in emphatic fashion. The Brazilian burst down the left before centring from the byline and a late Lewandowski run ended with a controlled side-footed finish into the roof of Benaglio’s goal.

Wolfsburg had wilted under the champion’s pressure and an atmospheric Allianz Arena rose once again to salute the the star of the show.

As Lewandowski and his teammates revelled in his fourth of the evening, the cameras panned to the incredulous reactions of those inside the ground. Guardiola clasped his hands to his head as he patrolled the touchline, while Arjen Robben – absent from the side through injury – was pictured similarly stunned.

Lewandowski had scored four goals in just six minutes, the fastest four-goal haul the Bundesliga had witnessed and the first time in the division’s history that a substitute had achieved the feat.

There was, however, more to come and the Lewandowski show saved its best act for last.

Bayern again poured forward in numbers, the red shirts looking to make more misery for the wounded Wolves. Mario Gotze picked up possession in space on the right touchline, before arcing a cross towards the edge of the area.

There in wait was Lewandowski who, confidence running through his veins, produced an audacious moment of instinct to seal his five-star showing.

The forward acrobatically met Gotze’s delivery on the volley, the connection fierce and flawless as the ball thundered past Benaglio. Having been introduced with Bayern trailing at the internal, it was now 5-1 to the home side with Lewandowski having scored each of their goals.

It had taken him just nine minutes.

“I still think about it a lot as it was such an incredible day. I still can’t explain how it all happened,” Lewandowski later reflected to fcbayern.com.

“It was an incredible nine minutes and never before have five goals been scored in such a short space of time – and I don’t think it will happen that quickly again in the future.

“During the game, I didn’t spend a single second thinking about what was happening. I was just focused on scoring goals and I didn’t realise it was a total of just nine minutes. It was like I was in another world, in a trance.”

Dumbfounded and delighted in equal measure, Guardiola’s disbelief has since become a social media meme, the look of utter astonishment as he turned to the Bayern crowd a defining image from Lewandowski’s iconic individual performance.

“I’ve never experienced such a thing, either as coach or as a player,” Guardiola said in the aftermath of the game, as per FourFourTwo.

Lewandowski’s sublime showing saw a number of divisional records go tumbling. Never before had a substitute scored five goals in a single game, while his five-goal haul was the fastest recorded in one of Europe’s top five leagues since the data was first collected.

On this day in 2015, Lewandowski broke 4 Guiness World Records for his 5 goals in 9 minutes against Wolfsburg 😱💪

Records for the fastest hat-trick, fastest four goals and fastest five goals in Bundesliga history all now belonged to Lewandowski, a statement showing from a forward on his way to becoming the game’s best number nine.

He ended the season as the league’s leading scorer and has since won the Torjägerkanone on a joint-record seven occasions, levelling the all-time landmark of Gerd Muller.

In a career which has seen Lewandowski shatter goalscoring records in routine fashion, his one-man destruction of Wolfsburg remains one of his finest hours.