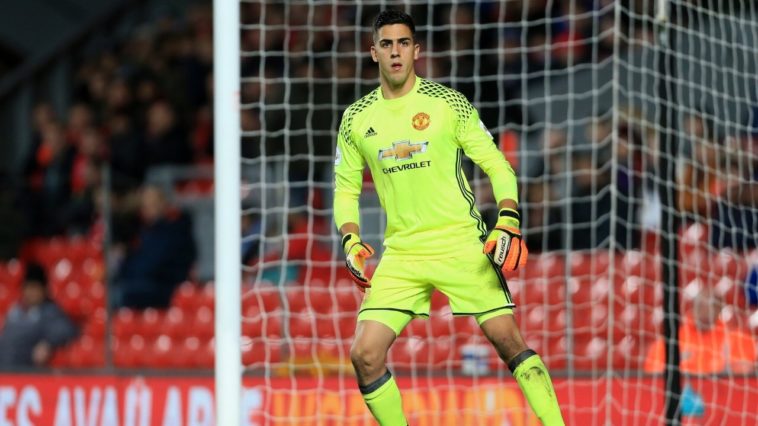 The Portuguese ‘keeper kept a clean sheet on his Premier League debut in a 2-0 win against Crystal Palace on Sunday and has now set his sights on making the job more of a regular one.

Speaking after the game, Pereira said:

“That’s what I want to do most and I will work hard for it,’ he said. ‘Obviously, I need to be patient. I am a young goalkeeper at one of the top clubs in the world, but my goal is to be the No 1 of United and hopefully I will get there and I will make sure I do that by working hard.

“I am happy to stay here. I want to be part of the team, part of the squad and we will see how it goes. We have the (Europa League) final and we have to make sure we win. Then I have the Euros (U-21 European Championships), come back for the pre-season, work hard and give everything. We will see step by step.

“The loan helped me a lot. It made me gain experience and some first-team football in the first division in Portugal. I was very pleased to be on loan and coming back I felt better, more confident and a little bit more experienced as well.

“I set a goal to myself to play and get some minutes (at United) and the manager gave me the opportunity and I am pleased with that and I want to thank him.”

Ahead of Pereira are the Spain and Argentina internationals David de Gea and Sergio Romero.

David de Gea has been Manchester United’s long-term first choice goalkeeper since Edwin van der Sar’s retirement but has been heavily linked with a £60m move to Real Madrid this summer.

Sergio Romero has made his claim for the number one during this season’s Europa League, which concludes this Wednesday in the final in Stockholm.

Speaking about his teammates and his debut, Pereira added:

“We have two world-class goalkeepers, and two great people and good friends also.

“They always try to help me and to have them as teachers I will say is great.

“They always help me and they make sure I improve all the time and get better each day. They told me (before the Palace game) to be confident, enjoy, play as usual as you do all the time and just be yourself.

“It was a great afternoon. I’m happy with the clean sheet and the performance from all the squad, the young boys as well. A win at Old Trafford is always special, so I’m very pleased.

“I just told myself to go out there and enjoy it. Do your best and things will come. It was great, clean sheet, a good start and hopefully it is the first of many.

“It’s always good to get compliments from the manager, especially Jose Mourinho. It’s a great way to pay him back and I just need to prove him right and train well and work hard every day.

“He told everyone to go out there and enjoy it and be confident. We wanted to win. We didn’t go out there to just enjoy and not get the result, and that’s what we did.”

Whether Pereira can go on and stake a claim for the number one shirt at Manchester United is yet to be seen.

Manchester United have been linked with making moves for a number of goalkeepers, including Atletico Madrid ‘keeper Jan Oblak.