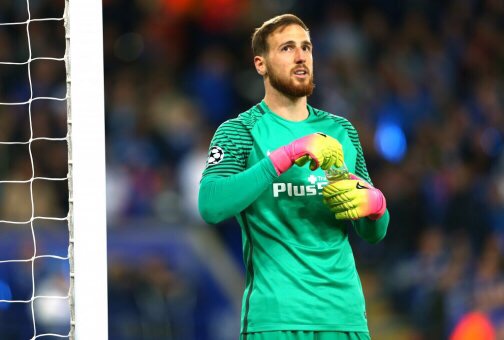 De Gea has been a long-term target of the reigning European Champions. He famously almost moved to the Bernabeu two-years ago, only for the move to break down at the 11th hour thanks to a dodgy fax machine. After that deal broke down, United wasted no time in tying the ‘keeper down to a new long-term deal at Old Trafford.

At the time, it was rumoured that this new deal contained a release clause that could be triggered by Real Madrid. This has since been refuted.

However, Real Madrid still maintain a strong interest in the goalkeeper and have been heavily linked once again over the last month or so.

Despite still being desperate to keep the goalkeeper, Manchester United are prepared to do business, and it is thought that a bid of around £60million would be enough to seal the deal.

If Real Madrid do come calling, and De Gea does decide to leave, Jose Mourinho has already lined up his replacement according to The Independent. Atletico Madrid’s Slovenian goalkeeper Jan Oblak is believed to be Manchester United’s main goalkeeping target.

The stopper has a release clause of €100million, but it is thought that a deal could be done for significantly less.

The article claims that Inter Milan goalkeeper Samir Handanovic and his cross city counterpart, AC Milan stopper Gianluigi Donnarumma, have also been looked at in the process of finding a replacement, but it is Oblak who has risen to the top of the pile.

The flights between Madrid and Manchester could be extremely busy this summer if transfer rumours are to be believed. Manchester United are rumoured to have agreed personal terms with Antoine Griezmann as well as being interested in Jose Maria Gimenez, also of Atletico Madrid.

United have also been linked with moves for Kasper Schmeichel of Leicester City and Manchester City’s out of favour goalkeeper, Joe Hart.

Who do you think will be Manchester United’s number one next season? Will De Gea still be at the club? If not, who should replace him? Leave a comment below.