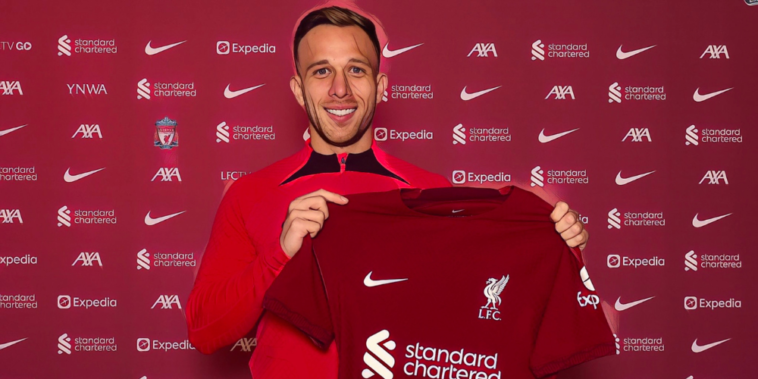 Jurgen Klopp has discussed Liverpool’s signing of Arthur Melo and admits he is delighted to have brought in the midfielder on loan.

Liverpool boosted their midfield options with the loan signing of the Juventus midfielder, who arrives on a season-long deal with no option to make the move permanent.

Melo has struggled to live up to expectations since a €72m move to Juventus in 2020, but is experienced at Champions League level and has won 22 caps for Brazil.

Klopp praised the 26-year-old’s attributes and believes a move to Liverpool could be a fine ‘fit’ for Melo following a challenging period in Turin.

He is not expected to receive international clearance in time to feature in tomorrow’s Merseyside Derby at Everton, but could be available for Wednesday’s trip to face Napoli in the Champions League.

“I’m really happy about this transfer. My info is international clearance will not happen until tomorrow,” Klopp told his pre-match press conference.

“We all hope he will be fine for Napoli. He is a really good footballer, who has had a very exciting career already and is still pretty young. He is coming into best age for a footballer [26 years of age].

“He gives us rhythm, he is a really good passer, has speed with the ball, and is safe on the ball. He is really good in tight areas so I like the transfer a lot. Why can you loan a player like this? Didn’t work out 100% at Juventus. I see it as positive because potential is still there. We play differently to Juventus. I thought could fit pretty well so we’re really pleased.”