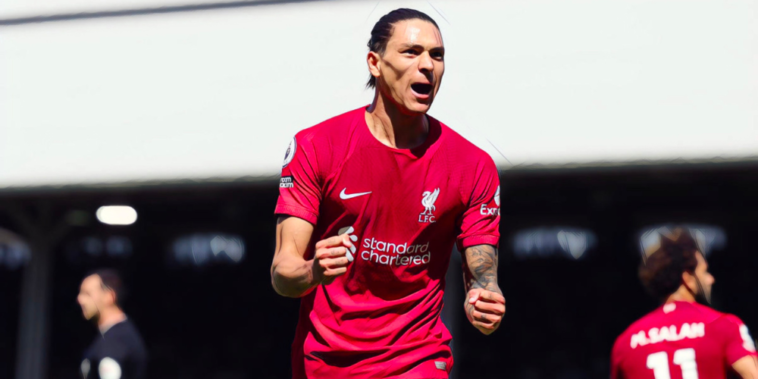 Each week we preview the Premier League weekend and discuss some of the division’s major talking points.

Nunez has point to prove on Liverpool return

For someone who has featured for just 96 minutes in the Premier League so far this season, it feels as if Darwin Nunez has packed quite a bit into that time.

A game-changing introduction from the bench saw the Liverpool forward score one and create another at Fulham on the opening weekend, before a confrontation with Joachim Andersen resulted in a red card and three-match suspension against Crystal Palace.

“I’m not too bothered by his red card. It doesn’t show a ‘weakness’. It’s not that he can be easily wound up. If he is, then he’d have never survived playing in Uruguay. He’ll be fine." #lfc [mirror] pic.twitter.com/EBwSKW4f6i

Add in the intense social media scrutiny from pre-season and a goal in the Community Shield win over Manchester City at Wembley and it’s been quite the ride already for Nunez at Anfield.

The 23-year-old returns from suspension this weekend as Liverpool take on Everton and Jurgen Klopp faces a decision on whether to include the record arrival from the start. Having let down his new teammates with a needless spell on the sidelines, he has a point to prove ahead of the first Merseyside Derby of the season.

Brentford have begun their second season at this level in solid form, losing just one of their opening five fixtures to sit 11th in the early Premier League table.

Thomas Frank will be pleased with his side’s start ahead of a clash with Leeds this weekend, but will have concerns over the club’s habit of starting games slow.

The Bees have conceded first in four of their five Premier League games so far this season, rescuing three draws from losing positions in the second half. Brentford have avoided defeat in five of their last eight Premier League encounters when conceding the opener, a welcome show of character but perhaps unsustainable across the course of a campaign.

Wissa was our third different substitute to score this season

Frank’s team repeated the trick at Crystal Palace in midweek as substitute Yoanne Wissa rescued a point late on. It’s the third time a substitute has salvaged a draw for Brentford this season, but Frank will want to avoid relying on savvy tactical changes moving forward.

Thomas Tuchel could not hide his frustration after Chelsea’s defeat at Southampton, with the west Londoners having won just one of their last four Premier League fixtures.

Tuchel bemoaned his side’s lack of resilience after blowing a lead to lose at St Mary’s, calling his team’s defending ‘sloppy’ and ‘soft’.

After the capitulation at Leeds last month there are concerns for the German, who must coax a reaction from Chelsea this weekend. Tuchel has received huge backing from owner Todd Boehly this summer, with the club investing a league-leading £278m into the squad. It is the sort of backing rival clubs could dream of and the American ownership will want to see a return on that investment.

Chelsea face West Ham in a London derby this weekend with the visitors arriving well-equipped for an upset after a record-breaking spend of their own.

Magpies may have a new hero

If there’s one thing that Newcastle supporters can appreciate it’s a talented number nine. Alexander Isak might be adorning the fourteen shirt at St James’, but his debut performance as a lone forward will no doubt have impressed his new support.

Isak shone during the midweek defeat to Liverpool, scoring one and seeing another ruled out for a marginal offside. His composure around goal was a stand-out and he looked far from intimidated in taking on the likes of Virgil van Dijk and Joe Gomez at Anfield.

Willing to run at defenders and cool when opportunities arrive, the £63m record arrival has the potential to be a huge success in English football. Still just 22, he could form a long-term part of Newcastle’s ambitious project.

Isak’s record of 44 goals in 132 appearances for Real Sociedad might not quite be Alan Shearer standards, but there’s reason for optimism following his bright start with the Magpies.

It’s been impossible to miss Nottingham Forest’s summer transfer window, with the club having embarked on arguably the most remarkable window in memory.

Forest have spent more than £150m on a British record 21 new additions this summer, headlined by the arrivals of Morgan Gibbs-White, Emmanuel Dennis, Jesse Lingard and Dean Henderson.

Even with five key loanees departing, it has been a stunning overhaul of Steve Cooper’s squad and the challenge now will be to gel a squad almost entirely made up of new signings.

“There will always be a turnaround with some players coming and going, but there will never be as many as this summer. It’s nice to know that most of the players you’ve got in are your own,” Cooper said, as per the Nottingham Post.

“It’s been a fairly unique summer, in terms of the turnaround – players coming in. It was always going to be a unique challenge with the numbers, then added to getting promotion and a different level of player that you have to look at. We’ve embraced that.”

Forest’s spending has sent a warning to rival sides, not least fellow promoted side Bournemouth who they meet this weekend. Scott Parker has already lost his job amid a poor start and criticism over a lack of backing from the Bournemouth board. Cooper can have no such complaints following a stunning summer spend at the City Ground.

Wolves’ lack of goals has been their undoing with the absence of a reliable goalscorer seeing the club’s push for European football falter last season.

Bruno Lage’s team have scored just twice across their opening five Premier League fixtures this season and have addressed their need for forward threat with the signing of Sasa Kalajdzic from Stuttgart.

The Austria international will provide presence in the final third for Wolves, with the 25-year-old’s 6ft 7in frame likely to cause problems for Premier League centre-backs. He arrives having scored 22 goals in 36 league starts across the last two Bundesliga campaigns and it will be hoped his ability to occupy defenders can bring the best from Wolves’ creative talents.

Kalajdzic has three assists from three games so far this season and will add a new option for Wolves, ahead of a clash with a Southampton side who have the worst aerial duel win percentage in the division this season.

Can anyone stop Erling Haaland?

It’s difficult to remember a Premier League signing greeted with such excitement, but the Manchester City forward has lived up to his star billing.

No player in Premier League history has scored more goals in their first five matches than Haaland’s nine, who made it back-to-back hat-tricks with a treble in City’s 6-0 thrashing of Nottingham Forest. He became just the sixth player to score hat-tricks in consecutive games and the fastest to claim two match balls in the Premier League, breaking Demba Ba’s previous record by a staggering 16 games.

Will Haaland break the all-time single-season Premier League goal record held by Mohamed Salah (32)? On current form you wouldn’t bet against it.

Aston Villa – a struggling side without a clean sheet so far this season – are the next club faced with the unenviable task of stopping him in his tracks.

Three straight wins have quietened the initial hysteria of Manchester United’s start to the season, when back-to-back defeats – including that 4-0 hammering at Brentford – saw the club reach crisis point by mid-August.

The critics of Erik ten Hag were out in full force, with his situation echoing that of Mikel Arteta at the same stage last season. Arsenal’s worst-ever start to a league season saw Arteta’s position come under threat, but the Gunners ignored outside noise, stuck to their plan, and are now reaping the rewards.

Top of the division after five consecutive wins, it has been the club’s best start to a campaign since 2004/05. The squad has been shaped in Arteta’s image, with recruitment having improved both the atmosphere and standards at the Emirates.

United are at a much earlier phase of their rebuild as the old rivals clash this weekend, but should take encouragement from the north Londoners’ patience and progress.

Both teams are looking to return to former glories, in which the duo competed as the Premier League’s dominant forces across the turn of the millennium. This weekend’s fixture might not have the drama or importance of past clashes, but could prove an important measuring stick for both sides.