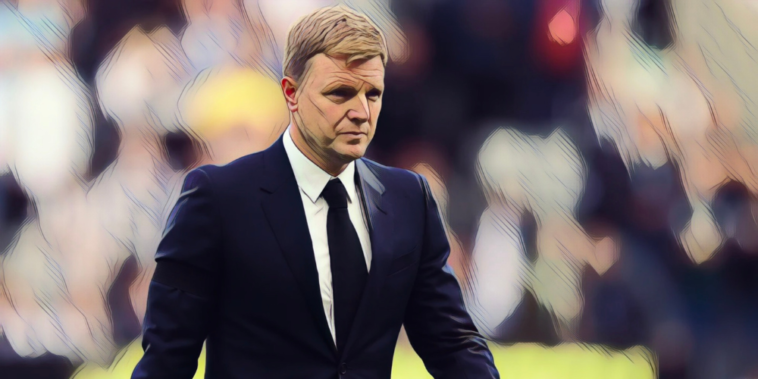 Eddie Howe has discussed the changes at Newcastle and says he is positive about the future on the anniversary of the club’s Saudi-led takeover.

Newcastle’s change of ownership was announced in October of last year with the club’s fans wildly celebrating the departure of the unpopular Mike Ashley and a new era at St James’ Park. A consortium fronted by Amanda Staveley and funded by Saudi Arabia’s PIF catapulted the Magpies into the financial elite, in a deal that turned Newcastle into the world’s richest club overnight.

Modern rules mean Newcastle’s resources have not been spent in gargantuan sums, but much has changed over the past 12 months.

Eddie Howe arrived to replace the much-maligned Steve Bruce as manager soon after the takeover and guided Newcastle away from the Premier League’s relegation places to an 11th-place finish.

Signings such as Bruno Guimaraes and Alexander Isak have swelled optimism in the North East and speaking ahead of this weekend’s clash with Brentford, Howe spoke on a transformative year on Tyneside.

“The club has come a long way,” Howe said at his pre-match press conference.

“The positivity first and foremost was what hit me with everyone connected with the club and what may lie ahead. That positivity is still there and that is a difficult thing to keep.

“Everyone behind the scenes has done a very good job in terms of putting the building blocks in place for what the club needs for long term success and hopefully we can deliver that.

“Without those structures in place the long term success isn’t going to happen. You need good people in the right positions. There is a lot of work going on behind the scenes to improve everything that we deliver for our current players and the players that we will have as we continue to exist so I’m very positive about the future.”

One year ago, everything changed.

Howe was again asked on how he viewed the unrest that has greeted Newcastle’s ownership, with criticism of Saudi Arabia’s human rights record and accusations of sportswashing having followed the club since the takeover.

Howe admits he understands the questions, but insists his focus remains on football and says he has to have faith in the Premier League procedures regarding ownership.

“Yes, I do and I understand the question. But for me, the directors’ and owners’ test ratified by the Premier League, I have to have faith in that process,” Howe added.

“Obviously I’ve been the decision-maker behind where some of that money has gone, and I’ve looked at it purely from a football perspective trying to recruit the best players for Newcastle.

“I’ve said this right from day one – it’s always about the football for me. If I veer too far from that and I go into areas of the club that won’t benefit my players or the team, then I’m not going to do my players justice.

“Everything for me is about trying to get the best out of the players that I have every single day, and hopefully that shows when we play. I’ve never veered too far from that in my management career and I think that’s vitally important for me.”