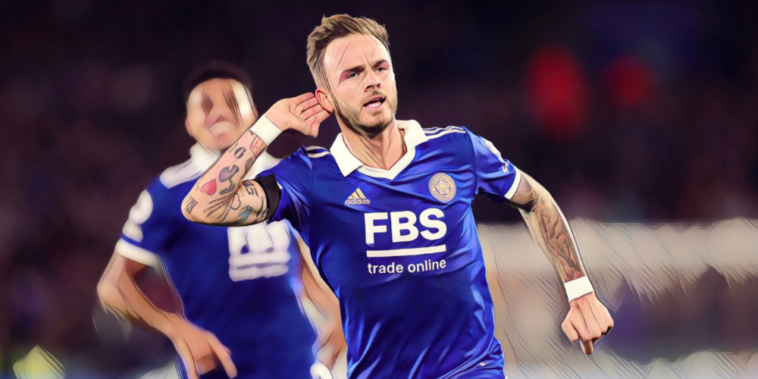 James Maddison has been one of the Premier League’s players of the season so far despite Leicester’s struggles, with the midfielder the driving force behind the Foxes’ first win of the season last time out.

Maddison has been in exceptional form dating back to last season, with two goals and an assist against Nottingham Forest on Monday night increasing the demands for his England recall. The 25-year-old has scored nine goals and provided five assists in his last 11 league appearances, but has continually been overlooked at international level and was a notable omission from September’s squad.

Maddison has failed to add to the one cap he won as a substitute in 2019, while his exclusion from Gareth Southgate’s expanded squad last month does not bode well for a World Cup place. Even given the wealth of competition for places, it remains head-scratching to see Maddison and Trent Alexander-Arnold remain largely ignored for an England side that has struggled for creativity and goals.

If his current levels are maintained until the announcement of Southgate’s squad this winter, he will be impossible to overlook for a place in Qatar.

Chelsea produced their best performance of the campaign to date to thrash AC Milan in midweek, with the west Londoners well worth their 3-0 win at Stamford Bridge.

The result and performance was a glimpse into life under Graham Potter, who remains unbeaten across his three games in all competitions. After less convincing performances against Salzburg and Crystal Palace, this was a display on which Chelsea can build with Reece James and Raheem Sterling menacing down the right flank and Pierre-Emerick Aubameyang on the scoresheet again.

Another rocket from Reece! 🤗 pic.twitter.com/R7B5zWAi5j

Chelsea this week face a toothless Wolves who are without a manager and who have scored just three goals so far this season. It is the start of a winnable sequence of games for the Blues, who take on Aston Villa and Brentford in their next two.

Potter will hope his team can build rhythm and confidence ahead of a meeting with Manchester United later this month, but must first overcome a mixed record against Wolves. Chelsea have not won in the last four league meetings between the sides.

Callum Wilson is another name who will be hoping to make a late push for the England squad, with the Newcastle forward having returned to action with a goal at Fulham last weekend.

Wilson has spoken candidly on his ambitions to represent the national side, having failed to build on a career with the Three Lions that brought four caps and one goal between 2018 and 2019.

Fitness problems have plagued the 30-year-old, but his record when fit is impressive and warrants a place in Southgate’s thoughts. Wilson has scored 29 goals in just 56 league starts since signing for Newcastle, including three in four games in 2022/23. He ranks behind only Erling Haaland for expected goals (xG/90) and non-penalty expected goals (npxG/90) per 90 minutes in the Premier League this season.

It appears an open race to join Harry Kane in England’s centre-forward contingent and with the likes of Dominic Calvert-Lewin, Tammy Abraham and Ollie Watkins struggling for form or fitness, a run of goals across the coming weeks could catapult Wilson into contention.

Control the key for Conte?

Tottenham’s unbeaten start to the season ended last week at the Emirates, with a comprehensive defeat at Arsenal a setback for Antonio Conte and his side.

Spurs were poor in the final third against the Gunners and lacked quality when counter-attacking opportunities arrived, the final pass – with Son Heung-min a particular culprit – lacking the required weight or accuracy.

Conte called for his side to be more clinical after a goalless draw at Eintracht Frankfurt in midweek, but the data shows that Spurs are in fact over-performing around goal. Only Manchester City – aided by the phenomenon that is Erling Haaland – and Leicester have outperformed their expected goals figure by a greater margin than Spurs in the Premier League this season. Spurs also rank second for shot conversion rate.

Spurs remarkably rank 20th for passes into the final third and 19th for possession won in the final third, while their table-topping figures for touches in the defensive third demonstrate how Conte’s side set-up deep. The north Londoners are also 12th for average possession (47.7%) and eighth for big chances created – hardly the expected statistics of a side competing near the top end of the division.

Against a Brighton team that cut through Liverpool at ease last weekend, Conte might seek greater control in the centre of his side. The introduction of Yves Bissouma against his former side and a midfield three might appear negative on paper, but it could aid Spurs in retaining the ball and building more patiently from the back.

The mood around West Ham has improved after back-to-back wins in the Premier League and Europe, with the Hammers following last weekend’s 2-0 victory over Wolves with a win at Anderlecht in midweek.

Gianluca Scamacca was on the scoresheet in both fixtures and the summer signing appears to be finding his rhythm after being forced to wait for his chance in the side. The Italian’s thumping finish against Wolves was an example of his quality around goal, while he came off the bench to score the winner in Belgium in midweek.

David Moyes turned to Scamacca and summer arrival Lucas Paquetá from the bench at Anderlecht and the two combined encouragingly to move the Hammers a step closer to the Europa Conference League’s knockout rounds.

With Jarrod Bowen also on the scoresheet for the first time this season against Wolves, things are looking rosier at the London Stadium after a false start.

Defining week for Liverpool starts at the Emirates

It might be early October, but the next week could prove defining for Liverpool’s season. Jurgen Klopp’s side are 11 points behind the league leaders, albeit with a game in hand, following a disappointing start to the season and the Reds’ problems continued in a 3-3 draw with Brighton last time out.

Liverpool were exposed time and time again against the Seagulls and have now conceded the first goal in 12 of their past 16 games in all competitions. That is a statistic that must change ahead of back-to-back clashes with the Premier League’s top two, as the Reds travel to face leaders Arsenal on Sunday before a huge clash with Manchester City at Anfield next weekend.

A wonderful free-kick to open the scoring in #LIVRAN 😍

In between is a trip to face Rangers at a raucous Ibrox, with Champions League qualification far from assured either. It’s been a difficult start for Liverpool and their season’s ambitions could hinge on positive results across their next three fixtures, with a run of form badly needed at this crucial juncture.

Liverpool have had the better of recent clashes with Arsenal and have not conceded a goal in the last six meetings. This is a different Gunners team however, who will be using this clash as a yardstick of their own progress.

Rashford back to his best?

Marcus Rashford’s renaissance continued for Manchester United in midweek, as the forward came off the bench to turn around the club’s clash with Omonia Nicosia.

United were headed towards an embarrassing result in Cyprus, before Rashford’s introduction helped turn the game. The 24-year-old scored twice and created another as the Red Devils came from behind to win, extending his impressive form in the early weeks of the new season.

Marcus Rashford has now scored as many goals in 8 games this season (5) as he managed during the entire 2021/22 campaign.

After a disappointing 2021/22 campaign in which he struggled for fitness and form, Rashford appears reenergised under Erik ten Hag. In just eight games he has matched his goal total from last season, while he also already has more assists.

It’s now eight goal contributions in eight games for the England international, who appears one of the first names on the team sheet at present. He will be hoping to continue that form against an improving Everton this weekend, with Frank Lampard’s side unbeaten in six games and boasting the Premier League’s best defensive record.

Steve Cooper’s name was sang loudly on the terraces on Monday evening despite Nottingham Forest’s crushing defeat to Leicester, with the man who guided Forest back into the big time a hugely popular figure despite the club’s struggles this season.

It remains to be seen how patient the Forest board remain however, with little sign of a return on their extraordinary summer investment after just four points from eight games. Forest have now lost five consecutive games and the manner of the 4-0 loss to previously winless Leicester will have raised alarm bells.

🗣️ “I wouldn’t want to be in that position. To sign 23 new players in one window is unique. I think he [Steve Cooper] deserves the time for that to settle.”

Cooper’s side next face another Midlands match-up when Aston Villa visit the City Ground on Monday evening. Steven Gerrard is under pressure of his own in the opposition dugout, with Villa having failed to convince this season.

Villa failed to beat Leeds last weekend despite boasting a man advantage for almost an entire half and Gerrard will need his side to be more clinical at Forest. The loser of Monday’s game, if there is to be one, will see the pressure gauge turned up another notch.