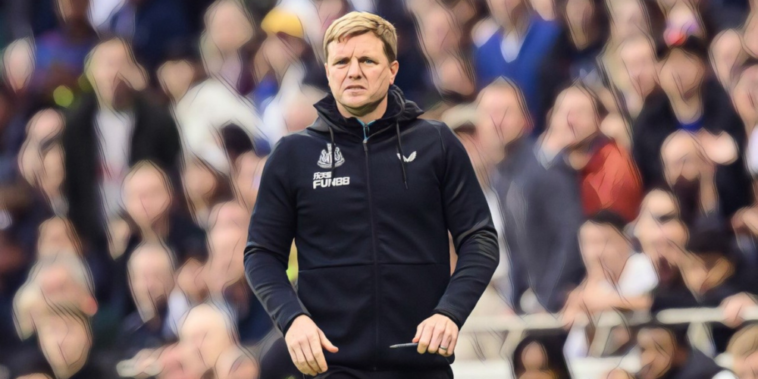 Eddie Howe has discussed his pride at Newcastle’s defensive record and has hailed the work-rate of his side’s midfield.

Newcastle are third in the Premier League table after a brilliant start to the season, with the Magpies’ success built on the division’s best defensive record.

Howe’s team battled to a goalless draw at leaders Arsenal this week to keep their Champions League ambitions alive and the Newcastle boss opened up on his pride at the club’s resolute rearguard.

“I still pride myself on being an attacking manager! Naturally, your focus can change day to day but your principles of play don’t change and they haven’t for us,” he told his pre-match press conference ahead of the club’s FA Cup clash with Sheffield Wednesday.

“There’s been a shift in our work, in trying to drill the players to make sure we’re defensively resilient but that’s not saying we didn’t do that originally.

“That was a definite area for improvement, so the challenge now is to hit those levels consistently. We’ve done that mostly so far this season, our defensive record has been very good but that will get harder for us. The mentality to defend by all the players has been superb.”

"The biggest thing is how we approach the game & the mentality of the group. Their motivation levels, professionalism, desire. We're under no illusions that it'll be a difficult task but it'll be more difficult if we're not in the right place ourselves." pic.twitter.com/zWn3iz5A7V

Howe also reserved praise for his midfield, hailing the work-rate of his engine room in recent fixtures and the draw at Arsenal.

“The physical exertion of our group shouldn’t be underestimated,” he said. “The players have had to give a lot, especially against Arsenal.

“The midfield epitomise that, it’s an area we don’t have a great deal of strength and depth in at the moment. But those guys are in a good place and they’re enjoying playing together, there’s no issues.”

Newcastle have endured a disappointing recent record in the FA Cup and have suffered third round exits in each of the last two seasons, while the Magpies have progressed past the fourth round just once since the 2005/06 campaign.

Howe insisted that he is keen to end that unwanted record as his side travel to Sheffield Wednesday. The Owls are in confident mood and 13 league games unbeaten as the club chase promotion from League One.

“Yes definitely. The interesting thing from that game was that we picked a very strong team, so it just goes to show that these games are so difficult.

“People will judge your selection but it goes to show anything can happen. The biggest thing for us is how we approach the game, the mentality of the group I do pick and their motivation levels.

“This is going to be a very hard game, Sheffield Wednesday are a very good team and I’ve been watching them a lot. They’re having a very good season, so we’re under no illusion that it will be a very difficult task.”