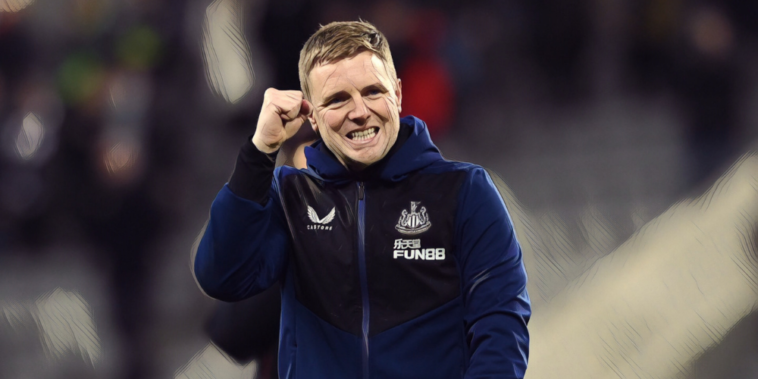 Eddie Howe has called for ‘consistency’ from Newcastle and says Allan Saint-Maximin ‘has the talent to do whatever he wants’.

Newcastle moved out of the Premier League’s relegation places with a 3-1 win over Everton in midweek, securing a second successive league victory and extending the club’s unbeaten run to four fixtures.

The Magpies host Aston Villa this weekend and ahead of the clash Howe has discussed the importance of his side’s continued support in their bid to pull clear of the division’s bottom three.

“Naturally when you win games it gives you a great feeling,” he said at his pre-match press conference. “After the Everton game it was great to share in that with the supporters. The players need to enter the pitch full of confidence knowing they’re going into a great environment to play football.

“I have to compliment the supporters on what they’ve given the team from day one. In some really difficult moments, they’ve always backed the players from start to finish and created some memorable moments for me personally. Hopefully many more to come.”

Howe was keen to stress that his side can’t get carried away after moving out of the bottom three, calling for consistency in the club’s performances and admitting that ‘football can change very quickly’.

“Consistency of results is key. What we can’t do is get too high after wins and get too low after defeats. We’ve got to be calm and focused on the next match. Football can change very quickly. We have to focus and be competitive as we have been.”

Newcastle’s win over Everton was inspired by Allan Saint-Maximin, with the Frenchman producing an electric performance at St James’ Park.

The 24-year-old is a huge fans’ favourite and was serenaded by the home crowd at full-time, with Howe believing the winger ‘has the talent to do whatever he wants to do’.

“He’s got everything I think you’d want in his locker already. His overall work-rate and attitude was very good on Tuesday and if he can hit that consistently then what a player he can be. He has the talent to do whatever he wants to do.”