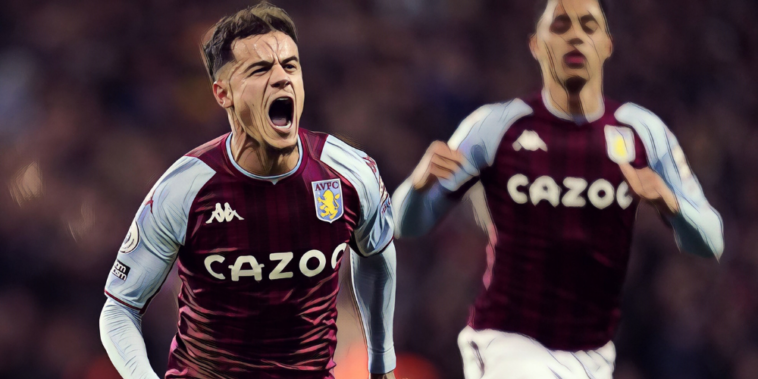 Each week we delve through the Premier League action and compile our divisional Team of the Week, with our latest comprising the star performers from the midweek fixtures.

Newcastle moved out of the relegation places after beating Everton at St James’ Park, a result which drags Frank Lampard’s side ever close to the Premier League’s drop zone.

Southampton continued their impressive form with an entertaining win at Tottenham, whilst Aston Villa and Leeds shared six goals in a thriller at Villa Park.

Elsewhere there were wins for Manchester City, Liverpool and Arsenal, though Manchester United lost ground in the race for a top-four finish after being held at Burnley.

Here is the Football Faithful’s Premier League Team of the Week.

Norwich dropped back into the Premier League’s bottom three despite extending their unbeaten run to four games in all competitions, the Canaries holding Crystal Palace to a 1-1 draw at Carrow Road.

In a game of two halves Norwich had Angus Gunn to thank for keeping them level in the second period, as Palace upped the pressure in search of three points.

The 26-year-old could do little about Wilfried Zaha’s equaliser, but made strong saves to deny Jeffrey Schlupp and Conor Gallagher in the second half to ensure Norwich earned a valuable point.

Newcastle’s new signing stepped up in a huge clash for the Magpies against Everton, with the right-back at the centre of a fine performance for Eddie Howe’s side at St James’ Park.

Trippier has become an instant leader in this side and led by example against the Toffees, defending superbly with a series of vital challenges and capping an all-action showing on the right with a wonderful free-kick.

A lovely free-kick right into the bottom corner 👌

Newcastle open up a two-goal lead and the stadium has erupted! 🎚 pic.twitter.com/r42Of5gSrJ

The 31-year-old’s move to Newcastle represented a gamble given the club’s precarious situation, but a four-game unbeaten run – including back-to-back wins – has lifted the Magpies out of the bottom three.

Joel Matip remains Liverpool’s first-choice partner to Virgil van Dijk and the centre-back’s contribution is ofter overlooked given the praise directed to the Dutch defender beside him.

Matip is a fine defender in his own right and produced another accomplished showing in the Reds’ 2-0 win over Leicester, dealing with the threat of Patson Daka and confidently stepping forward in possession.

A clever Matip assist and a typically clinical @DiogoJota18 finish 💥

The 30-year-old’s marauding runs forward are often encouraged by the Anfield support and Matip showed great composure to tee up Diogo Jota for the Reds second goal with a clever pass.

Gabriel proved crucial to Arsenal at both ends of the pitch as the Gunners secured a crucial 1-0 win at Wolves, a result which sees the North Londoners make ground on several top-four rivals.

The Brazilian defender gave Arsenal the lead after tapping home from close range and was then a towering presence as Mikel Arteta’s side hung on for three points, having seen Gabriel Martinelli sent off with 20 minutes remaining.

Arsenal were up against it as the hosts searched for an equaliser, though it was the type of situation which the centre-back relishes and in which he excels.

Southampton have lost just one of their last seven Premier League fixtures, having earned a 3-2 win at Tottenham in an entertaining midweek clash.

Romain Perraud was among the Saints’ star performers during the win in North London, with the left-back showing good awareness to pick out Armando Broja for the visitor’s equaliser.

The 24-year-old also rattled the crossbar with a fierce drive from distance in what was an encouraging showing from the summer signing, putting in arguably his best performance in a Southampton shirt.

Man of the match, as he so often is for Southampton, during the Saints’ comeback win at Spurs, the midfielder’s technique and delivery is among the most potent weapons in the Premier League.

Ward-Prowse has now scored or assisted in six of his past seven Premier League fixtures, after adding two more assists to his growing collection against Tottenham.

Given time and room to cross the ball into the box, there was only going to be one outcome as two fantastic deliveries found Mohamed Elyounoussi and Che Adams to seal a late win.

The 27-year-old has been exceptional this season and remains one of the most influential talents outside of the Premier League’s ‘top six’.

Jacob Ramsey is flourishing under the guidance of Steven Gerrard at Aston Villa, the midfielder continuing to impress in a real breakthrough season in the Midlands.

Ramsey is fast becoming a huge influence on this side and scored twice in the 3-3 draw with Leeds, his first showed cool composure on his weaker side, before an emphatic second was lashed high into the net.

Jacob Ramsey is heading to the top 💫 pic.twitter.com/Fn8D9H9NuG

The 20-year-old brings both energy and goal threat to the side and, whisper it quietly, his long-legged stride and desire to get into goalscoring positions from midfield has echoes of his manager.

Steven Gerrard took a gamble on his former teammate after securing the signing of Philippe Coutinho, one that has paid off in the early performances of his Aston Villa career.

Coutinho’s career has stalled in recent seasons, but there have been flashes of the old magic since his return to the Premier League, including a wonderful individual showing against Leeds.

Philippe Coutinho is settling in very nicely at Aston Villa.

He took that goal brilliantly! 💫 pic.twitter.com/0MsFJQ8aMu

The Brazilian scored one and created two more in a thrilling 3-3 draw, his goal taken in fine fashion as he teed up the space for a shooting opportunity across goal.

The trademark feints and drops of the shoulder were in full flow as he twice laid on goals for Jacob Ramsey, with Coutinho showing encouraging flashes of the world-class levels he once reached.

Daniel James produced his best performance for Leeds in the draw with Aston Villa, the Wales international proving a problem for the hosts throughout.

James has operated as a centre-forward in the absence of Patrick Bamford and his speed and energy stretched the Villa defence.

That is a wonderful finish from Leeds United's Dan James! 💛

The 24-year-old Welshman's third goal of the season takes the wind out of Aston Villa's sails. pic.twitter.com/d4m4XTMuPn

James scored twice and took both goals brilliantly, first netting a clinical finish to open the scoring before beating a host of Villa defenders to head home his second.

Leeds will now hope to coax similar performances from the summer signing on a more consistent basis.

Is there a more watchable player in the Premier League?

Saint-Maximin was a constant nuisance to Everton in a performance full of trademark fun and flair, driving at the Toffees defence and shrugging off challenges with an effortless ease.

The Frenchman’s flamboyance and dancing feet have made him a firm fans’ favourite at St James’ Park, but this was far more than the winger producing party-tricks with little end product.

His speed and energy were vital to the Magpies’ win as he racked up 10 dribbles, three shots at goal, and caused endless nightmares for the entire Everton backline.

Saint-Maximin’s X-factor can break games apart and having long been a bright spark in a dull era, he can remain a vital figure as a new dawn is ushered in on Tyneside.

Liverpool managed the headache of the AFCON with minimal fuss, largely in thanks to the clinical consistency of Diogo Jota.

Jota scored twice in the 2-0 win over Leicester, netting two instinctive first-time finishes to secure three points and move to 17 goals in all competitions so far this season.

He has 12 in the Premier League, a figure which ranks behind only Mohamed Salah, and has now reached 30 goals for Liverpool in just 60 appearances for the Reds.

The entire Everton team only has 25 🔴 pic.twitter.com/YbrXhAQUNl

For context, the only players to have scored 30+ goals in their first 60 appearances for Liverpool in the Premier League era are Robbie Fowler, Michael Owen, Fernando Torres, Daniel Sturridge and Mohamed Salah.

It’s fine company to keep for the Portugal international who has become integral to Klopp’s plans, with Jota boasting the third-best minutes to goal ratio in Liverpool’s entire history (50+ appearances).