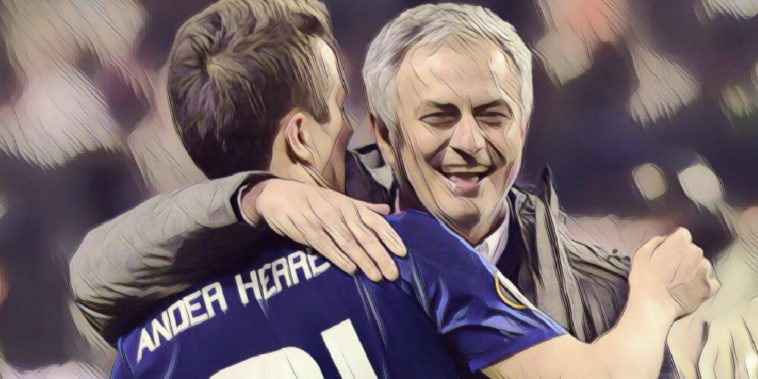 Ander Herrera has opened up on his relationship with Jose Mourinho at Manchester United, the impact of Ole Gunnar Solskjaer, and his eventual exit from the Premier League.

Herrera spent five seasons at Old Trafford before leaving to join Paris Saint-Germain on a free transfer last summer, winning three major honours during his time in English football and becoming a firm favourite amongst the Manchester United support.

The twice capped Spain international spent two-and-a-half of those years working under the guidance of Mourinho, winning a Europa League and League Cup double in 2017, and despite admitting to having ‘a great relationship’ with the Portuguese, he admits his former boss doesn’t take losing too well.

“Mourinho is the best manager in the world when things go well,” Herrera told The Athletic.

“The relationship with the players, the way he treats everyone; I really liked his training sessions. Also, with Rui Faria, they were a fantastic team together. But it is also true, when he loses, he does not take it in a good way. That is true. And he accepts that! He does not hide from it.

“We have a great relationship. The first year was fantastic, we won three titles. The second year, we won 84 points in the Premier League and came second. We lost the FA Cup final but we played much better than Chelsea (that day), if you remember that game.”

Mourinho’s fortunes – as so often has been the case throughout his career – began to suffer during a disappointing third season, and Herrera has revealed the ‘confrontations’ the former Red Devils boss had with the club that ultimately led to his departure in December 2018 – the now Spurs boss airing his frustrations at a lack of backing from the board.

“It is true the last six months was a bit different, because he had some disagreements with the club and the team was a bit, you know…,” he said

👇 One of the best performances! #mufc

Herrera admits the arrival of Solskjaer ‘brought a smile to the dressing room’, United winning their first eight fixtures of his reign in succession and later securing an incredible comeback victory to secure Champions League progress against Paris Saint-Germain.

Despite his subsequent exit, Herrera has described Solskjaer as ‘one of the best people I have found in football’ and has backed the United boss for success after striking up an instant connection with the players.

“As soon as Ole came, he brought that smile to the dressing room. He was ready to listen to the players, he was more like a friend. He was a man who had, not long ago, been a United player. Everyone connected really well with him.

“He is, honestly, one of the best people I have found in football. I am still in contact with him because he is fantastic and deserves to be successful. You do not find too many people like him in football; someone so honest, so ready to help, always by your side. It doesn’t matter the situation; as soon as you work and give everything, he is there for you. That was his first quality; to connect very soon with the dressing room.”

Herrera’s decision to turn down a new contract with the Red Devils to move to PSG brought criticism from some sections of the club’s support, though the Spaniard insists the deal was not money-motivated despite feeling under-appreciated during contract negotiations.

“It was not about money,” Herrera insisted. “It was not about the duration of the contract offer. In my opinion, I waited too long (for an offer) and deserved more attention from the club. I was a player that gave everything. I never complained. I never went to the media to complain about anything. I never put a bad face to any manager, to any member of the board, and they waited until I had five or six months left on my contract.

"Every time I wore the United shirt, I was so proud" 😍

“That’s why I had some disagreements with them. I tell you this but I also tell you that it is part of football, part of life, nothing personal at all. But you ask the question and I give my point of view, as a professional player.”

“I thought they were going to come two years before my contract finished, like most other clubs do. I expected them to come to sign a new contract after my club Player of the Year award in 2017 but they waited until I had six months left on my contract. I just felt sad. But, I repeat, and I really want you to put this so clear in this interview — that it is part of football, part of life. This is only professional and I have no personal problem with them.

“They had a different idea about the club, about the team, and I respect that 100 per cent. Even if I see Ed Woodward tomorrow, I’ll give him a hug because it is life. I had a great relationship with him. He is a very good man but we had some disagreements with our point of views about the team and about the club. That’s it.”