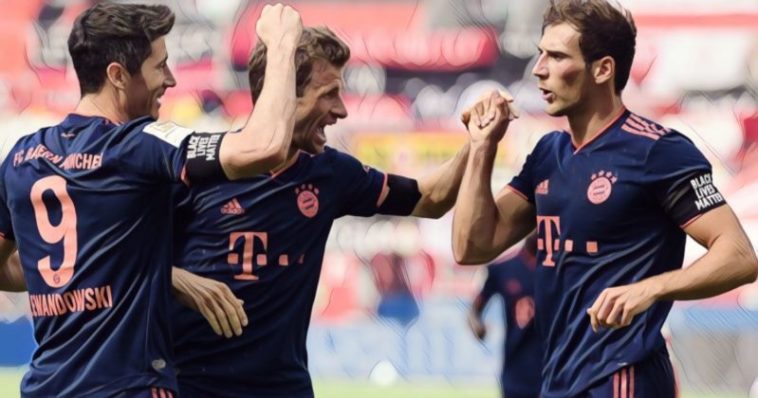 We reward the best and worst of German football with our weekly Bundesliga awards, featuring Black Lives Matter, a classy performance from Leon Goretzka, a fine finish from Jonjoe Kenny, and the youngest goal scorer in Bundesliga history.

Across the weekend German football showed its respects to the late George Floyd and the Black Lives Matter movement in a number of ways.

Before each kick-off players, staff and match officials all took a knee, while some footballers had their own personal ways of paying respect.

The Bayern Munich team wore t-shirts that said “Rot gegen Rassismus” (red against racism) during their warm-up, while some of the Borussia Dortmund players also wore tees bearing “No Justice No Peace”.

Bayern centre-back David Alaba, like others, wore an armband that read “Black Lives Matter”, while Mainz’s Pierre Kunde took a knee after scoring against Eintracht Frankfurt.

Bayern showed off the ridiculous strength of their first team at the weekend when they put a good Bayer Leverkusen side to the side with a 4-2 win.

On this occasion, it was Leon Goretzka who stepped up to the plate and the led the way, providing a goal and an assist during perhaps his most impressive display of the season. Meanwhile, Thomas Müller set up his and Robert Lewandowski’s goals, meaning the German has equalled Kevin De Bruyne’s record of 20 assists in a single Bundesliga season.

And he can score some goals 😎

The Bavarian outfit have now won their last nine Bundesliga matches, pulling away from the chasing pack in the table as they close in on an eighth consecutive title.

Schalke earned themselves some slight respite from a dreadful run of form by getting a point against Union Berlin thanks to Everton loanee Jonjoe Kenny, who sent a rocket into the net of the capital club in the first-half to equalise.

“I’ve had a few chances lately where I could have put my foot through it. Once I got the touch out my feet the only thing was to shoot,” the Liverpudlian said after the game.

What a hit from Jonjoe Kenny! 💥

Schalke are back in it… pic.twitter.com/y2LPb8RCzM

Florian Wirtz made history on Saturday when he scored against Bayern Munich, making the Leverkusen prospect the youngest goal scorer in Bundesliga history at the age of 17 years and 34 days.

Just when RB Leipzig look like they’re going to nail down a spot in next year’s Champions League, their inconsistency rears its head once again. Every impressive win of the last few months has been followed up with a lacklustre draw against beatable opposition, as was the case this week when they drew against lowly SC Paderborn.

Their case wasn’t helped by the petulance of centre-back Dayot Upamecano, who kicked the ball away in frustration after fouling an opposition player. That earned him his marching orders for a second and unnecessary bookable offence.

With just four games left in the campaign, the East German outfit sit in third place just three points ahead of Borussia Monchengladbach and Bayer Leverkusen, ensuring they will endure a nervy end to the season.

Why RB Leipzig’s Dayot Upamecano is so highly rated

Some players are card magnets, but Paderborn midfielder Klaus Gjasula really takes the biscuit. On Saturday afternoon the Albanian received his 16th yellow card of the season against RB Leipzig.

We haven’t quite decided whether or not that’s just plain foolish or actually impressive, but Gjasula is definitely this week’s Donkey.

Read: Liverpool bantered over Werner and the best tweets of the week

See Also: How the Premier League could improve the viewing experience upon returning