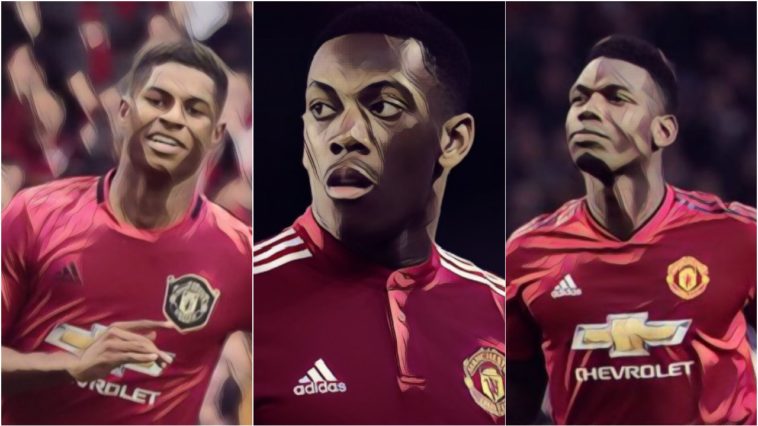 Ander Herrera reckons former Manchester United teammates Paul Pogba, Marcus Rashford and Anthony Martial can be among the ‘best in the world’.

Herrera spent five seasons with the club before leaving to join Paris Saint-Germain on a free transfer last summer, but has kept a close eye on the progress of his former side and believes Manchester United have a number of players, including Paul Pogba, who are capable of steering the club toward silverware in the near future.

Pogba was once described as an “NBA athlete with Brazilian feet” by Italian outlet Gazzetta Dello Sport, but has struggled to deliver on a regular basis since his world-record move from Juventus four years ago, though Herrera believes that ‘consistency’ is all that his lacking from his former teammate who he says ‘has everything’.

“I would add something else,” Herrera said in an interview with The Athletic. “‘An NBA athlete with Brazilian feet and the combinations of a Spanish midfielder’. He can combine really well — he can do one-two, very quick at high speed. He does have a good attitude.

“I give you my opinion: I don’t know what other players say but he is a midfielder that has everything. If you see other midfielders in the world, they may have some qualities — control of the ball, long shots, passes, tackles, box-to-box — but Paul can do all of this, plus head the ball, score goals, make recoveries, one against one… everything.

“But of course, if you want to become the best midfielder in the world, it is about consistency. You have to do it day in, day out. He is a good guy. He wants to do it. He does train well. He has to do it every day.”

Herrera also opened up on his view that Marcus Rashford and Anthony Martial could develop into two of the finest forwards in world football, though again believes the attacking duo must find consistency before being considered amongst the world’s best.

“They have the quality to be among the top 10 in the world,” he added.

“Why do we admire Lionel Messi or Cristiano Ronaldo, or Hazard, who I also think is one of the best in the world? We admire them because they keep that form for a long time. If they do it, they will become… maybe not Messi or Cristiano, because they are unique in the history of football… but they can be top five or top 10, but they have to do it for a long time and keep it up.

“It is the same for Paul. Rashford is on his way to doing it. And Paul can be the best midfielder in the world if he keeps playing those games where we are all amazed by him. But to keep it at that level is the most difficult thing in football. To keep at it it Sunday-Wednesday-Saturday, every time.

“If those three can do that, Manchester United will win the Premier League soon, for sure.”