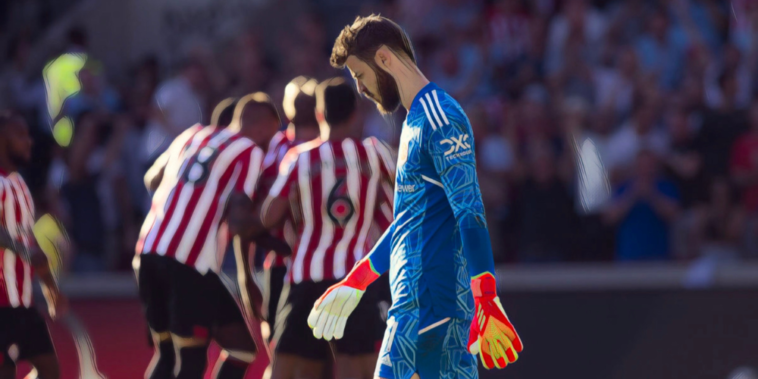 Gabriel Martinelli has began the season in red-hot form, with the Brazilian becoming to come of age at Arsenal. The forward’s potential has been evident since his initial arrival, but after a full pre-season the Brazilian has started the campaign with a bang.

The 21-year-old has two goals in two games after a fine finish to seal this weekend’s win over Leicester, but it is his overall game that has impressed with relentless running and encouraging combinations.

His partnership with compatriot Gabriel Jesus has the makings of a potent pairing and teammate Oleksandr Zinchenko was among those to hail Martinelli following his latest display.

“He is incredible, he is a real diamond,” Zinchenko told the Evening Standard. “I would say exactly the same things about him that I say about Gabriel Jesus.

“The way these two guys are working — how everyone is working really — every single day is unbelievable. He (Martinelli) has got amazing quality and he’s still young. I am pretty sure he has an unbelievable future.”

Dreadful. The sole positive from David de Gea’s performance was his decision to front up to the cameras post-match, following a horror-show from the Spaniard at Brentford.

The first goal was a calamitous mistake as Josh Dasilva’s low shot squirmed under his grasp, with the goalkeeper getting the basic fundamentals all wrong. Dasilva’s surprise in his celebration told its own story.

From there, De Gea’s day went from bad to worse. Criticised for his ability with the ball at his feet, he added further weight to his doubters with a horrendous pass to an under pressure Christian Eriksen.

Eriksen was duly robbed of possession on the edge of his own area with Mathias Jensen accepting the gift. Brentford 2-0 up and just 18 minutes gone.

David de Gea: “I cost three points to my team today and it was a poor performance from myself. It was a horrible day”, told @ShamoonHafez. 🚨🔴 #MUFC

It was four before the break on an evening few in either west London or Manchester will forget quickly. De Gea has been a fine servant for much of his time at Old Trafford, but his inability to command his area or adapt to the demands of a modern goalkeeper will mean he will continue to be exposed.

On a weekend where De Gea’s disasterclass contributed to a humiliating defeat for his parent club, Dean Henderson was out to prove a point and win over his new fanbase.

Henderson decided to leave Manchester United on loan to sign for newly-promoted Nottingham Forest and has impressed across his opening performances at the City Ground.

The 25-year-old’s home debut proved one to remember as he helped Forest to a first Premier League win since the late nineties, with an excellent penalty save from Declan Rice ensuring a clean sheet and three points.

23 years worth the wait!! What an atmosphere what a club!! What a win let’s go forest❤️🔜🔛🔝 @NFFC pic.twitter.com/PDNQVnIGw7

After being overlooked at Old Trafford, the goalkeeper picked the perfect time to make a point with England manager Gareth Southgate a keen onlooker in Nottingham.

Henderson has not been shy in criticising his treatment last season and the early evidence is that the shot-stopper is keen to send out a statement this season.

Welcome to the Premier League, Lisandro Martinez. After a shaky start against Brighton last weekend, the summer signing was given a true baptism of fire at Brentford.

Part of a Manchester United defence torn apart across the opening exchanges, he was hooked at half-time with the Red Devils four goals down at the break.

The question marks regarding his height will be even louder now, as the Argentine was bullied and bruised in west London. Ivan Toney had his number and he knew it, while Ben Mee towered over the Argentine to head in Brentford’s third in a rampant performance.

Top players have taken time to adapt in England, but the manner in which Martinez was exposed will cause concern with the centre-back appearing ill-suited to the demands of the Premier League. Erik ten Hag – the man who put his faith in Martinez this summer – had seen enough after 45 torturous minutes.

Nick Pope was the star of the show as Newcastle battled to a draw at Brighton, with the goalkeeper in exceptional form during a goalless draw at the Amex Stadium.

It’s now two clean sheets in two games for the summer signing from Burnley, who has already proven his worth with a number of smart stops across the Premier League’s opening fixtures.

Eddie Howe has been delighted with the immediate impact of the England international, whose current form puts him in contention for a World Cup place. The Magpies’ boss praised Pope’s performance, outlining to NUFC TV his belief that the 30-year-old will have make a major contribution this season.

“I think the one that sticks in my head was Lallana’s header,” Howe said. “What a save. I thought it was in. He’s capable of that and we’re going to need him this year.

“I think he’s gelled really well with the guys in the backline and early signs are good for him.”

Two games into the new season and familiar flaws remain evident at Leicester. No side has conceded more than the Foxes’ six goals, after Brendan Rodgers’ side followed the squandering of a two-goal lead to Brentford with a 4-2 defeat at Arsenal.

Leicester led the Premier League for set-piece goals conceded and headed goals conceded last season and were exposed again at the Emirates, as Gabriel Jesus gratefully accepted a gift to nod in from close range for the Gunners’ second.

Danny Ward’s lack of communication and calamitous mistake then handed Arsenal a third and Leicester will continue to struggle for results while errors are repeated.

Brendan Rodgers has been public in his desire for new signings, with the free transfer arrival of back-up goalkeeper Alex Smithies the club’s only addition to date. Leicester’s defence could further be depleted as Chelsea continue to court Wesley Fofana and Rodgers will want to avoid a late dash for defenders before the deadline.

Brentford have performed above all expectations since promotion to the Premier League, but this was a weekend in which the Bees truly buzzed.

Last weekend’s comeback against Leicester was encouraging, before Brentford secured their best result since returning to the top-flight with a 4-0 mauling of Manchester United.

Mathias Jensen was magnificent in midfield, acting on pressing triggers and giving former teammate Christian Eriksen a torrid time. Ben Mee was commanding on his home debut. Ivan Toney and Bryan Mbuemo bullied the visitor’s backline with a mix of pace and power.

Thomas Frank’s side cost a fraction of their beaten opponents, but desire, a mastering of their strengths and detailed work on exposing opposition weaknesses led to an emphatic victory.

Frank spoke openly at how his side targeted United’s vulnerabilities and it was a game-plan executed to perfection. United were dire, but a brilliant Brentford performance contributed to that. All credit to Frank and his players.

The hero last week as Fulham upset the odds to earn a draw with Liverpool, it was Mitrovic’s turn to take the villain honours this week as his missed penalty cost the Cottagers a first win of the season.

The Serb’s spot-kick was saved by Josa Sa during a goalless draw with Molineux, while the old temper also flared up once again as he went head-to-head, quite literally, with Morgan Gibbs-White.

Not his weekend this time around but Mitro, as ever, brings elite entertainment to the Premier League.