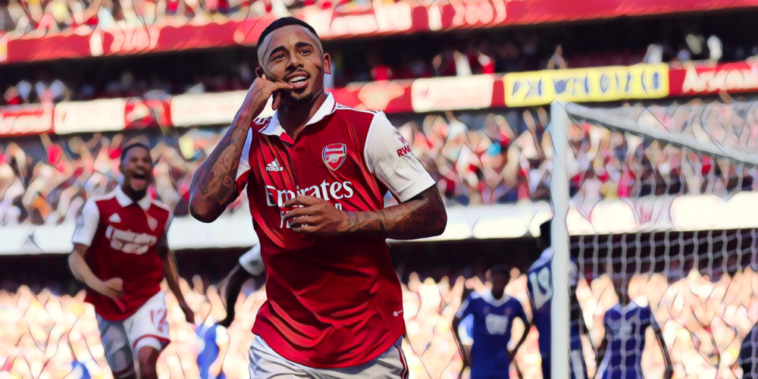 It was a weekend of contrasting fortunes for the Manchester sides, with United battered at Brentford as Erik ten Hag’s early reign continued in nightmare fashion. City moved top of the Premier League after beating Bournemouth however, while Arsenal also continued their perfect start to the new campaign with an entertaining win over Leicester.

Elsewhere there was a first Premier League win in 23 years for Nottingham Forest and Steven Gerrard came out on top in his first managerial meeting with ex-England teammate Frank Lampard.

Nottingham Forest’s long wait for a Premier League win is over as Steve Cooper’s side secured their first three points since returning to the top tier.

Forest’s 1-0 win over West Ham got their campaign up and running after a difficult start last weekend, with summer signing Dean Henderson excellent in goal.

The goalkeeper joined on loan from Manchester United and starred on his home debut, guessing right to save and hold Declan Rice’s penalty for the visitors.

23 years worth the wait!! What an atmosphere what a club!! What a win let’s go forest❤️🔜🔛🔝 @NFFC pic.twitter.com/PDNQVnIGw7

The 25-year-old also showed brilliant reactions to push Tomas Soucek’s header away and no doubt sent a statement to his parent club, with goalkeeping blunders having behind a humiliating loss for United the previous day.

In a summer of mass change at Forest, Henderson’s loan arrival could prove one of the shrewdest signings of the Premier League window.

Another of the new arrivals in Nottingham, Williams was at the heart of Forest’s best work during the club’s win over West Ham.

Williams found a Trent Alexander-Arnold-sized obstacle in his path to first-team football at Liverpool, but showed during an impressive home debut for Forest that he is ready to impress at Premier League level.

The Wales international led the contest for a number of attacking metrics with Williams a threat all afternoon in an all-action wing-back role.

He will sleep well tonight. 🥵 pic.twitter.com/6W0xfQqNLV

The 21-year-old produced a number of excellent deliveries from the flanks and was alert defensively to make a crucial goal-line clearance to deny Kurt Zouma late on.

Impressive on debut last weekend and even better on his first appearance at Stamford Bridge. Koulibaly was a stand-out performer during Chelsea’s 2-2 draw with Tottenham this weekend, producing a fine performance in a bad-tempered capital clash.

The Senegal international was authoritative defensively and excellent in possession, while he capped a dream debut on home soil with a superb volley to open the scoring.

What a way to get your first goal for the club! 👏 pic.twitter.com/iaPFVI66MY

It might be just two games into his Chelsea career, but he already appears a fan favourite at Stamford Bridge.

Tyrone Mings has had a challenging start to the Premier League season, with Steven Gerrard having made clear in no uncertain terms that the centre-back must raise his levels.

Removed as club captain in pre-season, Mings was also an unused substitute as Villa lost their Premier League opener at Bournemouth last weekend. The England international returned to the starting XI against Everton and issued a statement to his manager, producing a commanding performance as Villa secured their first win of the season.

Great to be home 💜🏡
Thank you for all your support and noise today 🥹 pic.twitter.com/f7YkxXFsoi

The 29-year-old dominated his duel with Antony Gordon with his physical presence too much for the Everton forward, while he made six clearances and a crucial last-ditch challenge to prevent a certain goal. A brilliant response from Mings after a test of character during the early stages of the season.

Henry produced another outstanding showing as Brentford sealed their most impressive win since promotion to the Premier League.

The 25-year-old continues to go from strength to strength as a modern wing-back in Thomas Frank’s side and must surely be knocking on the door for an England inclusion.

Henry offered forward threat and shut down Jadon Sancho, as Brentford ran out 4-0 winners over Manchester United. His performance was in huge contrast to the struggles of Luke Shaw, who he will have ambitions of replacing in Gareth Southgate’s plans.

An underrated component of Arsenal’s improvement, Granit Xhaka has stepped up a level for the Gunners. The Switzerland midfielder was exceptional as the north Londoners made it back-to-back wins to start the season, scoring one and creating another in the club’s 4-2 win over Leicester.

Xhaka’s passing over long and short range was excellent at the Emirates, while his positional intelligence saw him step in to cover the marauding Oleksandr Zinchenko in a more fluid approach from Arsenal.

The 29-year-old has had his fair share of critics during a turbulent time in north London, but Xhaka is back in form and favour and thriving as part of a promising side.

Brentford’s midfield three were dominant as the Bees ran riot to thrash Manchester United this weekend, with Jensen perhaps the pick of the bunch as he gave former teammate Christian Eriksen a torrid time.

The Denmark international was tasked with shutting down Eriksen and did so in brilliant fashion, including a decisive high press for the second goal as he robbed his compatriot of possession before firing home.

United couldn’t cope with Brentford’s pressure, with Jensen setting the tone alongside the equally impressive Josh Dasilva and Christian Norgaard in midfield.

Manchester City’s best player as the champions made light work of Bournemouth at the Etihad. De Bruyne has began the season in fine form after a strong pre-season and was at the centre of City’s 4-0 win over the Cherries this weekend.

There was the usual smattering of exquisite passes from the Belgium international, while he took his goal in sublime fashion with a nonchalant outside-of-the-boot finish beyond Mark Travers.

De Bruyne added an almost customary assist to tee up Phil Foden in a pleasing afternoon’s work for City’s talisman.

Rodrigo’s brace was not enough to seal three points for Leeds this weekend, but Jesse Marsch will no doubt be pleased with the Spaniard’s hot streak around goal.

The 31-year-old followed up an opening day effort with a double in the club’s 2-2 draw at Southampton, topping the early charts as the Premier League’s leading scorer.

It’s now seven goals in his last four appearances including pre-season and Marsch will hope it can continue after a struggle for goals last season. His movement and finishing were of a high quality at St Mary’s, with Leeds now unbeaten across their opening two games.

Scored twice and should have had a hat-trick in a brilliant home debut for Arsenal, with Jesus already proving to be a superb signing for the Gunners.

The Brazilian took his first goal brilliantly before a poacher’s effort from close range for his second, while he added two assists in a complete centre-forward performance at the Emirates.

Leicester struggled to live with his movement and work-rate with Jesus having added a new dimension to Mikel Arteta’s side. Thriving with increased status after a bit-part role at Manchester City, his early understanding with Gabriel Martinelli – an unfortunate exclusion from this XI – is hugely encouraging as the samba stars click in north London.

Ivan Toney has shown in his Premier League career he’s not afraid to ruffle feathers on and off the pitch, with the Brentford centre-forward bullying a weak Manchester United backline this weekend.

Toney was a dominant presence leading the line for Thomas Frank’s side, winning five aerial duels as he contested for each and every loose ball.

His physical presence caused constant problems for the Red Devils and while he failed to get on the scoresheet he did not disappoint, turning provider with assists for Ben Mee and Bryan Mbuemo.

Alongside aforementioned teammate Rico Henry, he will be hoping his strong start to the season can attract the eye of Gareth Southgate. The race to join Harry Kane in England’s centre-forward set-up appears an open one with Qatar looming.