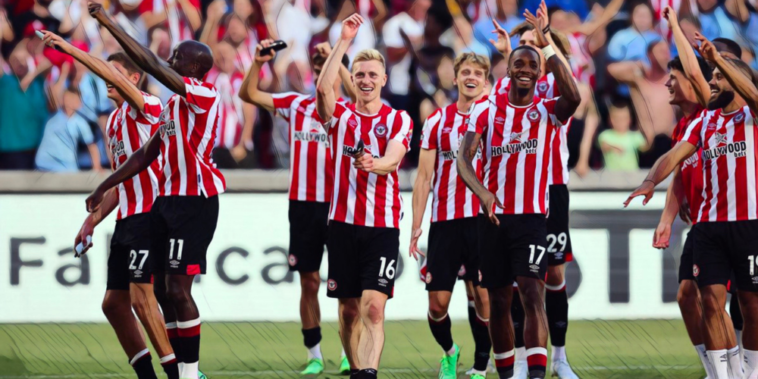 Where else to begin but at Brentford? Erik ten Hag’s reign as Manchester United began with defeat to Brighton, but this was far worse than anyone could have anticipated after that opening weekend disappointment.

United were insipid and inexcusable. Their midfield was swarmed as the Bees ran riot across the opening exchanges to cut apart the visitors and mount a four-goal lead at the half-time interval. It was fortunate the scoreline was not heavier. This was perhaps the club’s worst defeat of the Premier League era and one that will take some recovering from.

David de Gea was a disaster, his worst performance in more than a decade at Old Trafford. Lisandro Martinez was shambolic, Luke Shaw abysmal and Harry Maguire void again of any form of leadership.

Not one of the side who began the game can take any form of solace, on an afternoon where Ten Hag will have realised clearer than ever the names in the dressing room who will continually let him down. The problem, however, is whether he will be given the time or backing to attempt a turnaround.

It might be two games into his reign, but United are bottom of the Premier League and already in crisis.

An honourable mention goes to the touchline theatrics of Thomas Tuchel and Antonio Conte. A bad-tempered capital clash between Chelsea and Spurs ended with both managers sent off following the full-time whistle, as the two coaches figuratively – and almost literally – butted heads at Stamford Bridge.

The scenes might have been little more than handbags at dawn, but it feels as if the Premier League has been lacking a managerial rivalry with added spice of late.

…red card on the pitch but still valid on social media.

Gabriel Jesus enjoyed a dream debut on home soil for Arsenal this weekend, with the forward involved in all four goals as the Gunners beat Leicester 4-2 at the Emirates.

Jesus has shone since swapping Manchester City for a more prominent role in north London, following a fine pre-season campaign with two strong outings in the opening weeks of the Premier League season.

Against the Foxes he was outstanding, opening the scoring with a brilliant improvised finish before showcasing his poacher’s instinct to head home a second from close range.

Gabriel Jesus with two goals and two assists in his first Premier League match at The Emirates.

Jesus could, and should, have had more goals, but he added two assists in an all-round performance that will continue to increase the optimism around Arsenal.

His combinations with Gabriel Martinelli were also encouraging and back-to-back wins to start the season have a Jesus-led Arsenal dreaming of ending their Champions League exile.

The credentials of Kalidou Koulibaly were well known upon his arrival at Chelsea. An imposing central defender with presence and leadership, he had been regularly linked with the Premier League before completing a move to west London this summer.

Not quite as anticipated were sublime goals, but the 31-year-old opened his account for Chelsea in stunning style this weekend.

Koulibaly met Marc Cucurella’s corner flush on the volley as the summer signings combined to open the scoring against Spurs, with the new fan favourite keen to soak in the celebrations at Stamford Bridge.

What a way to get your first goal for the club! 👏 pic.twitter.com/iaPFVI66MY

Koulibaly’s goal continued an impressive recent record for Chelsea centre-backs in this fixture, with four of the club’s last six goals against Spurs having come from central defenders.

Nottingham Forest are up and running in the Premier League, with Taiwo Awoniyi’s debut goal securing the club’s first win since promotion.

The City Ground raucously celebrated a first Premier League win in more than two decades, but Forest rode their luck in the contest and required a strong performance from Dean Henderson in goal.

The on-loan Manchester United goalkeeper proved the hero with a second-half save from the spot, guessing right to keep out – and hold – Declan Rice’s penalty.

Declan Rice has a chance to equalise for the Hammers from the spot but he can't put it past Dean Henderson! ⛔ pic.twitter.com/qdLjVcsdNF

Rice’s kick lacked power, but it was a pivotal moment in the game and Henderson’s heroics helped secure Forest a first win since returning to the big time.

Lucas Digne found himself at the centre of a quirky statistic this weekend after putting through his own goal in Aston Villa’s 2-1 win over Everton.

Ironically, he is also Everton’s leading scorer so far this season despite leaving the club for Villa Park eight months ago.

Much has been made about Martinez’s lack of height for a centre-back and Frank confessed that the Bees had followed the Brighton blueprint from last weekend in opting for a more direct approach.

Any, or all, of Manchester United’s beaten side could conceivably feature here, but in a pathetic performance it is David de Gea who takes this unwanted crown.

De Gea was poor against Brighton last weekend and even worse this time around, producing arguably his worst showing in more than a decade in the Premier League.

His fumble for the first goal was unforgivable as he allowed a tame shot from Josh Dasilva to escape his grasp, before a ludicrous attempt to play from the back led to Brentford’s second.

His decision-making and execution with the ball at his feet were shambolic. If Ten Hag continues with De Gea and a desire to build from the very back, he will continue to be found out.