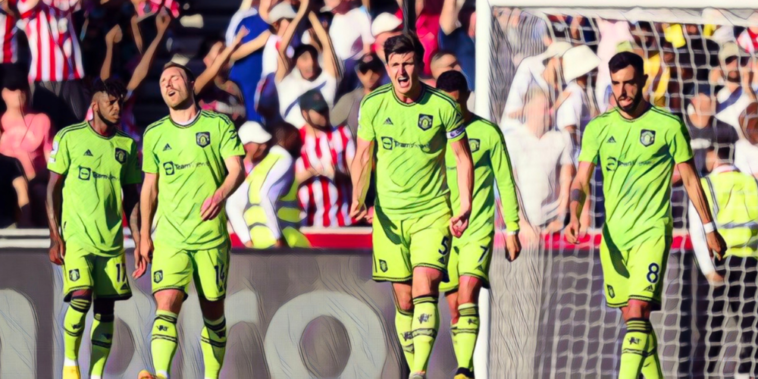 Erik ten Hag’s reign at Manchester United has began in nightmare fashion, with back-to-back defeats leaving the Dutchman without a point in the Premier League.

Even in an era of disappointments for the Red Devils, their embarrassing 4-0 loss at Brentford this weekend was a new low. Ten Hag’s team were humiliated on a humbling evening in west London, as the Bees ran riot to score four goals before the half-time break.

The optimism that arrived with Ten Hag’s appointment has been replaced with despair among the club’s supporters, whose team are bottom of the Premier League following arguably their worst performance of the modern era.

David de Gea had a disaster in goal for the Red Devils, allowing Josh Dasilva’s tame effort to squirm in for the game’s opener, before a dreadful pass to Christian Eriksen allowed Mathias Jensen to steal possession and score a second.

Ben Mee bundled in a third for a goal on his home debut and Bryan Mbuemo made it 4-0 to complete the rout after just 35 minutes.

The numbers make for grim reading after a dreadful display from United.

Here are ten of the most embarrassing statistics from the club’s 4-0 defeat at Brentford.

Erik ten Hag brought his squad in for extra training on Sunday, cancelling a planned day off to put the Red Devils through a gruelling session. The Dutchman’s decision came after United had been outrun and outfought at Brentford.

Gary Neville and Jamie Redknapp are CLASHING on #SNF 😳😳🔥🔥pic.twitter.com/e9d3jAeZN2