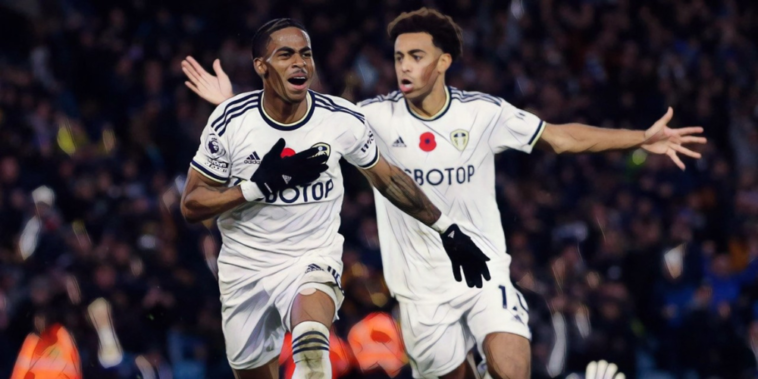 Summerville scored for the third consecutive fixture to complete a thrilling Leeds comeback against Bournemouth, as Jesse March’s side fought back from 3-1 down to win 4-3 at Elland Road.

His dramatic winner came just a week after he snatched a stoppage-time win at Liverpool, results which have moved up to 12th in a congested bottom half of the table.

Scores the winning goal for the 2nd week in a row. 🤙 pic.twitter.com/clY5tti9kK

The comeback came with interventions from a series of prospects, with Wilfried Gnonto (19) and Sam Greenwood (20) influential in turning the tide alongside the 21-year-old Summerville, who will struggle to have a better week across his entire career.

Pierre-Emerick Aubameyang faced Arsenal as an opposition player for the first time this weekend, though it proved an unhappy reunion for the ex-Gunners captain.

Chelsea were lacklustre and disappointing in a 1-0 defeat to Arsenal at Stamford Bridge, with Aubameyang ineffective and starved of service.

Aubameyang had eight touches against Arsenal before being subbed off in the 64th minute 😐 pic.twitter.com/GwzmhESSuO

The pre-game build-up – amplified by BT Sport’s promotional video featuring the forward – had centred around Aubameyang’s reunion with Arsenal, but he managed just eight touches of the ball before being substituted.

A sullen-looking Aubameyang was pictured on the Chelsea bench during the closing stages, as his old side secured a statement win to move back to the top of the Premier League.

Eddie Howe will celebrate his first anniversary as Newcastle manager this week and it has been an incredible 12 months on Tyneside.

There were doubts over Howe’s credentials despite sustained success at Bournemouth, with the 44-year-old relatively unproven outside those settings and last relegated from the Premier League with the Cherries before taking a break from the game.

Howe was not even the first choice upon his arrival, but has proven to be an inspired appointment. Newcastle are the form team in the Premier League right now and up to third after a 4-1 win at Southampton.

Howe’s signings have worked, while he has removed doubts over his ability to organise a backline with Newcastle proudly boasting the division’s best defensive record.

Add in the vast improvement of players such as Fabian Schar, Joelinton and Miguel Almiron and it’s a recipe for sustained success. Europe is well within reach for the Magpies as their revolution gathers pace.

On a list of footballers you don’t want to gift-wrap a goalscoring chance to, it’s pretty likely that Mohamed Salah would be placed near the top.

Eric Dier provided Salah with a clear run on goal following a horrific moment for the England defender this week, as he got his header back to Hugo Lloris so very, very wrong in Spurs’ defeat to Liverpool.

With Spurs pushing for an equaliser after Salah’s early opener, Dier picked the worst time to make a mistake of such magnitude, with the Egyptian never likely to waste his opportunity when presented with the task of facing Lloris one-against-one.

MO SALAH AT THE DOUBLE! ⭐

Seconds later it was 2-0 to Liverpool and Spurs were unable to recover.

Aston Villa had no shortage of stand-out performers as Unai Emery’s reign began with an impressive victory over Manchester United.

Jacob Ramsey shone in midfield, while Leon Bailey was unplayable at times and Tyrone Mings dominated his duel with Cristiano Ronaldo. In among those performances was an encouraging display from Ollie Watkins, who ran himself into the ground for the cause.

Watkins caused Victor Lindelof problems all afternoon with his bustle and work rate, dragging the defender out of position as part of a fluid-moving frontline alongside Bailey. His movement was intelligent and he drove forward with purpose, including a fine assist for the third goal as he powered past Lindelof before centring for Ramsey

Ralph Hasenhuttl is the fifth Premier League manager to be sacked this season, following Scott Parker, Thomas Tuchel, Bruno Lage and Steven Gerrard out of the exit door.

Hasenhuttl’s reign at Southampton has come to an end following the club’s 4-1 defeat to Newcastle, a result which leaves the Saints in the relegation places after six defeats from nine league games.

Southampton have sacked manager Ralph Hasenhuttl after their 4-1 defeat to Newcastle at the weekend.

He had previously survived two 9-0 defeats to Man United and Leicester 👀 pic.twitter.com/6U32kMtF0W

The Austrian’s tenure was one of some positive moments but little in terms of tangible progress, with the Saints unable to build on an 11th-place finish in 2019/20 – their best under his management. Consecutive finishes of 15th has been followed with further signs of regression this term, as an inexperienced side has struggled for results.

Youri Tielemans is having his own Goal of the Season competition this season, with the Leicester midfielder having added another special strike to his collection at Everton.

Tielemans’ goal was the strike of the Premier League weekend, a wondrous dipping effort that might just have topped his stunner at Wolves last month. It was the highlight of an impressive performance from the Belgian, who appears to be revelling in the responsibility of the captain’s armband.

The orchestrator of Brendan Rodgers’ midfield, he helped set the tempo for Leicester who continued their recent improvement with a 2-0 win on Merseyside. The defensive capitulations of earlier this season are becoming a fading memory and Tielemans’ control of the midfield was vital to the Foxes earning another win and clean sheet this weekend.

The speculation over his future – he is out of contract at the end of the season – does not appear to be impacting the midfielder’s performances.

Joao Cancelo will be thanking his lucky stars that Manchester City emerged from this weekend’s clash with Fulham unscathed, as Erling Haaland’s stoppage-time spot-kick snatched a late win at the Etihad.

Cancelo had left his team with an uphill task after a clumsy foul on Harry Wilson inside the area, one which provided Fulham with the chance to equalise from the spot and saw the Portugal defender head for an early bath.

Pep Guardiola was far from impressed with Cancelo’s challenge and urged his team to learn their lesson after a fortunate escape.