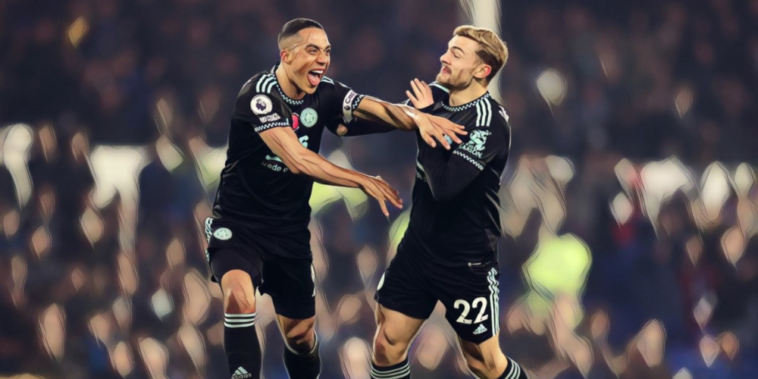 What a week it’s been for Leeds and Crysencio Summerville. Summerville was the hero once again as Leeds came out on the right side of a thriller with Bournemouth at Elland Road, a clash which saw the home side roar back from 3-1 down to claim all three points.

It was an encounter which contained all the ingredients of a Premier League classic. Goals, drama, unpredictability and the right smattering of mistakes and mayhem to create a truly chaotic clash.

A week after his late winner stunned Liverpool to ease the pressure on Jesse Marsch, Summerville repeated the trick to earn Leeds back-to-back wins. Marsch deserves credit for his game-changing substitutions, with Sam Greenwood and Wilfried Gnonto central to their comeback success.

🤯 "4-3 to Leeds! That is incredible!" pic.twitter.com/YcXb7DSxCQ

James Maddison picked the perfect time to underline his England credentials with a starring role in Leicester’s 2-0 win at Everton.

In truth, Maddison has made his case for a recall for some time, with only Harry Kane having been involved in more Premier League goals since the turn of the new year among English players.

Maddison’s international prospects have been a repetitive topic, but there is little doubt the 25-year-old deserves a chance if Gareth Southgate’s side is truly selected on form – as the England boss often claims. He created both goals as the Foxes continued their recent improvement at Everton and was the best player on the pitch by a considerable margin.

'Hopefully I can force my way into Gareth Southgate's plans!' 🏴󠁧󠁢󠁥󠁮󠁧󠁿

James Maddison on his chances of being selected in the England squad for the World Cup. pic.twitter.com/eVWzKVqHck

The midfielder oozes confidence and creative class. He manoeuvred around Everton’s challenges with nonchalant drops of the shoulder and sharp feints, with Leicester’s best moments coming through Maddison. Southgate’s pragmatism might decide differently, but room should be made in Qatar for the maverick match-winning quality of the Foxes midfielder.

After a wonder goal at Wolves last month, the Leicester midfielder was at it again with another special strike this weekend.

Tielemans’ technique has seen the Belgian compile quite the catalogue of Golazos and his opener at Everton was another effort straight from the top drawer.

He really is having his own Goal of the Season competition.

Here's another GOTS entry for you! 📨

The Unai Emery era is up and running at Aston Villa.

There was much excitement ahead of Emery’s managerial bow at Villa Park and his new side responded with arguably their best performance of the season to beat Manchester United. Leon Bailey was electric for the home side, while Ollie Watkins and Jacob Ramsey provided bustle and drive that the Red Devils struggled to live with.

The home crowd was buoyant and expectant and Villa responded with a showing full of endeavour and energy, with their forward line combining brilliantly to take the game away from Erik ten Hag’s side inside the opening minutes.

“I am a privileged man to be here and to win against them.” 🙌 @UnaiEmery_ pic.twitter.com/x3sPoaoFyV

It was Villa’s first Premier League win against United at Villa Park since 1995 – the fixture that prompted Alan Hansen’s infamous ‘You can’t win anything with kids’ quote about the visitor’s inexperienced side.

Newcastle are in fine fettle right now. Eddie Howe’s team are third in the Premier League after a fourth consecutive league win, with those on Tyneside beginning to dream of a potential top four finish.

The Magpies have been beaten just once in the Premier League this season and own the division’s best defensive record. That improvement at the back has been married with increased goal threat, however, with this weekend’s 4-1 win at Southampton the fourth time in just seven games that Newcastle have scored 4+ goals in a Premier League fixture.

You have to go back 226 games for the previous four occasions.

4+ – @NUFC have scored 4+ goals four times across their last seven games in the Premier League, as many times as they had done so in their previous 226 games in the competition. Cylinders. pic.twitter.com/bqTBAc47Cx

Eric Dier endured a moment to forget as Spurs lost at home to Liverpool.

The England international gifted the visitors their second goal with a howler, as he got an attempted header back to Hugo Lloris all wrong. Under no pressure, Dier’s miscue sent Mohamed Salah clear on goal and the Egyptian made no mistake to punish his error in clinical fashion.

Having trailed to Salah’s early opener, Dier’s mistake came at a time when Spurs were beginning to take the ascendancy and gave his side a mountain to climb in north London.

MO SALAH AT THE DOUBLE! ⭐

He struggled against the strength of Darwin Nunez on occasion and despite pushing forward to get Spurs back into the game after the break, was at fault for the game’s decisive moment.