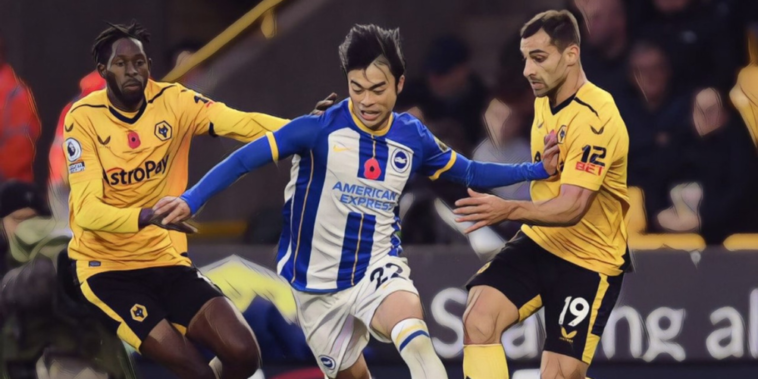 Brighton’s recruitment team continues to unearth unpolished diamonds, scouring the globe far and wide for players with the potential to thrive in the Premier League.

Marc Cucurella returned the club a profit of more than £45m in the space of a single season at the Amex Stadium and the Seagulls have several other stars among their ranks who could command sizeable sums in the near future.

Moises Caicedo continues to attract interest from England’s leading clubs, while Kaoru Mitoma is fast emerging as one of the most exciting wide talents outside the ‘Big Six’. The 25-year-old was outstanding in this weekend’s win over Wolves, a fixture which saw the Japan international head home his first goal for the club.

Mitoma was dangerous all afternoon with his direct football, as he burst beyond opposition challenges and gave Nelson Semedo a torrid time. Semedo was sent off for bringing down Mitoma in the second half, before the winger teed up Pascal Gross’ winning goal.

Mitoma also won seven ground duels, recovered the ball on five occasions and demonstrated an explosiveness in the final third that should shine under Roberto De Zerbi’s front-footed approach.

That the Japan international and Caicedo cost a combined £6m from Kawasaki Frontale and Independiente del Valle respectively is a testament to the diligent work of the Seagulls’ scouting network.

Three wins from four games has lifted Crystal Palace into the top half, with the Eagles impressive to come from behind and beat West Ham this weekend.

Palace had struggled to build on a promising debut season under Patrick Vieira during the season’s early weeks, but now appear to be finding their groove right now. Vieira’s side have won four of their past six, having won just once in their opening seven games of the season.

The Frenchman will be delighted with the application of his team, who have taken more points from losing positions than any other side. 63% of the club’s points have come from after trailing, having bounced back to beat Aston Villa, Leeds, Wolves and West Ham already this season.

12 – @CPFC have gained more points from losing positions (12) than any other side in the Premier League this campaign. Attitude. pic.twitter.com/b68U4pIphR

Palace’s welcome habit of overturning deficits is in contrast to Bournemouth, who for the second successive week imploded to drop points. The surrendering of a two-goal lead to lose to Spurs last weekend was disappointing, but a repeat of that at Leeds was inexcusable.

Bournemouth were 3-1 up heading into the final half hour at Elland Road, but wilted under the pressure from the home side to lose 4-3 in a chaotic triller. It’s now four consecutive league defeats for the Cherries who have slipped back towards the bottom three.

Chelsea and Manchester United sit outside of the Premier League’s top four at present, with both sides beaten during disappointing performances this weekend.

Chelsea were lacklustre and lacked forward threat in a 1-0 defeat to Arsenal at Stamford Bridge, a team who looked short of ideas and invention in possession. Raheem Sterling has failed to fire as hoped since his summer arrival from Manchester City, while Pierre-Emerick Aubameyang endured a miserable reunion with his former side.

The 33-year-old had just eight touches before his substitution, with Chelsea’s lack of goals a real issue for Graham Potter to address. Sterling and Kai Havertz are the club’s leading scorers in the Premier League this season, though each have just three goals.

Aubameyang had eight touches against Arsenal before being subbed off in the 64th minute 😐 pic.twitter.com/GwzmhESSuO

United have problems of their own in attacking areas. Cristiano Ronaldo’s lack of goals is a concern and the Portugal international has just three in 17 appearances in all competitions this season. Despite a disrupted start to the campaign, it is a poor total from a player who trailed only Mohamed Salah and Son Heung-min for goals in the Premier League last season.

Anthony Martial’s ongoing fitness issues have provided Ten Hag with few alternatives and a lack of firepower could prove costly in the race for Champions League football.

🙃 Cristiano Ronaldo has committed more fouls (7) than he has had shots on target (6) in the Premier League this season pic.twitter.com/kQbaQ6fLyw

Mohamed Salah’s ‘slow’ start to the season has ignited in recent weeks, with the Egyptian showered with praise following his match-winning performance at Tottenham this weekend.

“When you look back, everybody will remember one of the best strikers you ever saw because the numbers will be absolutely insane,” Jurgen Klopp gushed.

“He scored two goals and played like a real team player. Top performance and outstanding attitude.”

Salah was back to his ruthless best in north London, as two first-half goals earned the Reds a first away win of the Premier League season. His double was superb, the first an instinctive touch and crisp finish to open the scoring, before lifting a wonderful finish over Hugo Lloris to extend the visitor’s advantage.

It’s now nine goals in eight games for Salah who has found his goalscoring groove, while only once before has the 30-year-old had more goal contributions at this stage of a season. He now has 45 goal involvements in 55 career appearances against ‘Big Six’ sides in the Premier League – the definition of a big game player.

In what shaped as a must-win game for Liverpool at Spurs, Salah delivered.

That information is nothing new, but the value of the indefatigable midfielder was evident this weekend as his busy brand of football helped Manchester City compensate for a man disadvantage at the Etihad.

City survived a scare to edge past Fulham this week, with Joao Cancelo’s clumsy challenge on Harry Wilson earning the defender an early red card.

What an effort and win from everyone!
Fans were unbelievable
🔵💪🏻 @ManCity pic.twitter.com/6Wtb6Xc2aW

City had been leading at the time of Cancelo’s red card, but were pegged back and a man down as Andreas Pereira converted from the spot.

It was a game in which the champions needed to dig deep and no player epitomised that more than Bernardo, who selflessly covered the ground to ensure Pep Guardiola’s side remained in control. His monstrous work rate was rewarded as City found a late winner to keep the pressure on leaders Arsenal.