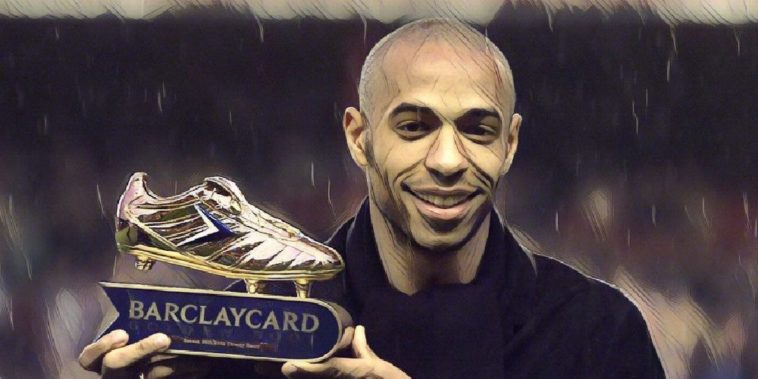 Henry reigned as arguably the Premier League‘s finest player during an eight-year spell at Arsenal, establishing himself as the all-time record goalscorer in the history of the north London side.

The forward would often contest the league’s Golden Boot with Van Nistelrooy during the Dutchman’s five-year spell at Old Trafford, with Rio Ferdinand recently revealing the former Man Utd striker would obsess over Henry’s goal record during that period.

“Ruud van Nistelrooy used to come in the changing room after a game, trust me, we’re trying to win the league, we’ve beat someone 3-1 or 4-1, he’s scored one goal, he’ll come in and look up to the TV [shake his head] and go ‘ohh’,” Ferdinand said.

“Then someone will go, ‘Thierry has scored two today, Ruud has only scored one, so he’s a goal behind now.’ And he’s sitting there devastated, and you can see it.

“I used to sit there and think this guy is mad, we just won 3-1, he’s scored a banger, set someone up as well, and he’s disappointed.”

Henry would finish as the league’s leading scorer in four of the five seasons in which he directly competed against Van Nistelrooy for the honour, though despite his supremacy over his goalscoring rival, the Gunners’ great has played down the importance he placed on winning the Golden Boot.

“When Edu played his last game for Arsenal and I was battling with Ruud van Nistelrooy for the Golden Boot I gave him the penalty.

“It’s because you ask me the question don’t get me wrong…but if you look at the number of my assists I gave in the game and sometimes I was in front of the goal and I squared it – that would answer that question [whether he was as obsessed].

“I would not have all those assists if I was only just thinking about the Golden Boot.”

Van Nistelrooy would win the golden boot just once during his time in England, scoring 25 compared to Henry’s 24 in 2002/3, though the Frenchman did set the all-time record for assists (20) that season, and the Premier League icon insists he only got ‘upset’ if he couldn’t contribute.

“When I was upset was if I didn’t give an assist or I didn’t score,” Henry added.

“If I didn’t help my team in any shape that’s when I come on the bus and put my head down, maybe saying stuff I shouldn’t be saying because I get upset with myself.

“There’s a game in Sunderland where we were sure to be in Champions League and I gave Ljungberg three assists in the game and Ruud passed me with a goal.

“I could be greedy and play for myself but that’s how the game is. Ruud was an amazing striker, I had so many battles with him, he was a striker playing in an amazing team.”