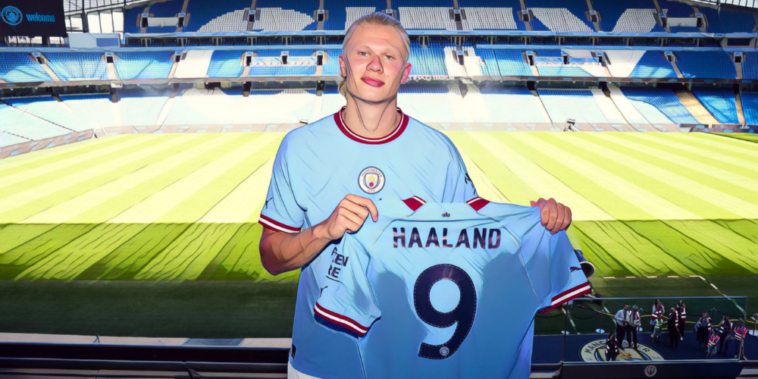 Erling Haaland has set his sights on success with Manchester City and has called the Champions League his ‘favourite competition’.

City completed the signing of Haaland from Borussia Dortmund for a fee of £51m earlier this summer, with the forward officially unveiled to the club’s supporters at a welcome event held at the Etihad on Sunday.

The Norwegian arrives with a huge reputation after scoring 86 goals in 89 games across two-and-a-half seasons at Dortmund, with Haaland admitting he can’t wait to get started in English football.

“It’s a big challenge,” Haaland said, as per the club’s official website.

“It’s a new country, new league, new coach… new everything. I know how it is to come to a new club, I have done it a couple of times before.”

“Like I have been doing my whole career, I will try to enjoy every moment and not to think too much.

“Overthinking is not a good thing. I try to relax when I can and work hard.

“Hopefully I can bring some more quality. With me as a striker, I want to have fun. When I have fun, I score goals and enjoy playing. I hope to smile a lot.”

City beat off competition from a host of Europe’s leading clubs to sign Haaland, who emerged as one of the most coveted talents in the game at Dortmund.

Thank you for making me feel so welcomed and loved! 💙 #mancity pic.twitter.com/2CjZaUrcq1

The 21-year-old discussed his decision to sign for the Premier League champions and has set his sights on winning the game’s biggest trophies with the club.

“I had a feeling in my stomach. The way they play. I had the feeling for City,” he added.

“Every footballer wants to win trophies and become better every single day.

“Sometimes I see players pose with a trophy and I say, ‘I would love to be you’. Let’s keep working hard and hopefully I will win some trophies.

“I said it before, Champions League is my favourite competition.”