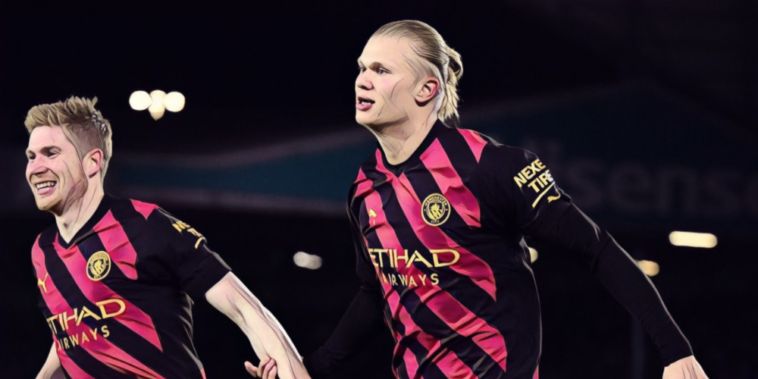 Pep Guardiola believes that Erling Haaland can get ever better after the forward scored twice in Manchester City’s 3-1 win at Leeds.

The Norwegian’s brace saw become the fastest player in history to reach 20 goals in the Premier League, while it’s now 26 goals in just 20 appearances across all competitions for the club.

Despite that goalscoring record, Guardiola believes Haaland is capable of producing even more for the Premier League champions.

“I think he is still not at his best because of the injury, to move his huge body is not easy for him but as much as he can play, minutes will be better,” Guardiola said. “I had the feeling he is not at his best. It is a matter of time.

“[He is] always an incredible threat for the opponent. The numbers are unbelievable but I have the feeling he is not just coming here for the numbers, he wants to win it. Still there are 70 points to play for.”

Guardiola expressed his delight at Haaland’s ‘exceptional’ numbers this season, but reiterated that the forward was capable of even more after City missed a succession of chances during a frustrating first half at Leeds.

“He missed chances, hopefully he can do better, but the numbers are exceptional, an incredible threat for us and always in the right position at the right time,” Guardiola said.

Haaland spoke on his goalscoring return after watching the World Cup from home this winter, admitting his absence from the tournament has further fuelled the fire for success at club level.

“I kind of recharged my batteries and to watch other people score and win games in the World Cup kind of triggers me and motivates me and also irritates me,” Haaland told Amazon. “I’m more hungry and more ready than ever.”