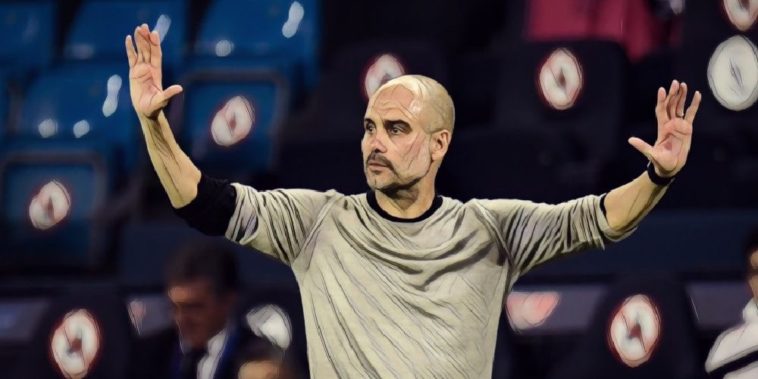 Manchester City secured their place in the last eight of the Champions League with a 4-2 aggregate win over European royalty, Real Madrid.

Leading 2-1 from the first leg, Man City didn’t need to play their full-throttle pressing game from the off, Pep Guardiola’s side seemingly content to allow Real Madrid’s defenders to knock it around among themselves in the opening exchanges.

However, as City started to apply the squeeze, Gabriel Jesus caught out the dithering Raphael Varane high up the field in the ninth minute of the game, the defender’s loose touch allowing the Brazilian to steal the ball, before squaring it to Raheem Sterling, who comfortably tapped home his 100th goal in a sky blue shirt.

The goal didn’t really change the complexion of the game though, Real Madrid still requiring to score twice, and in the 28th minute, in-form striker Karim Benzema gave the visitors hope as he powered home a Rodrygo cross, the Frenchman rising unopposed from seven yards out.

However, it was City who dominated the game, particularly after the break, though you wondered if it would be one of those nights after they fluffed their lines on a number of occasions.

Then, in the 68th minute, City were once again gifted a goal – and once again it was Varane who was at fault.

Without the suspended Sergio Ramos alongside him, the France international completely misjudged his attempted headed clearance, while his second bite of the cherry saw his headed backpass fall short of Thibaut Courtois, allowing Gabriel Jesus to nip in and turn the ball home from a narrow-angle.

Two goals in the last 22 minutes would have seen Real Madrid progress on away goals, though in honesty, it never really looked like coming, with former Chelsea star Eden Hazard looking woefully off the pace and largely anonymous throughout for the 13 time European champions.

They failed to attempt a single shot in the final 20 minutes. pic.twitter.com/h6BfZ7t223

Speaking afterwards, Guardiola admitted he had to ‘convince’ his side to attack on what was an unusually humid night in Manchester.

“We created a lot of chances and scored two goals with mistakes from them,” he told BT Sport. “We tried to convince them to go, go and attack but it is not easy against this team.

Guardiola’s trademark pressing style is hardly a secret, though for some reason he was asked if it was part of his side’s gameplan: “We try to do it,” he said. “Sometimes it works and sometimes it doesn’t. In general, we did a good job.

“We could not expect after 30 minutes be 4-0 up. The second half didn’t have much but we created a lot. The players made an incredible effort – all of them.

“The first half we played with our wingers more inside, not wider. I think that was a mistake from my side. We corrected in the second half and were better.

“It is important, we beat them twice. Zinedine Zidane never lost knockout games. You see the calm and personality they play with, they are good. We are here to try and win the Champions League. It is one step, if we think that is enough we will show how small we are. If you want to win you have to beat the big clubs.”

The result sees Man City book their place in next week’s mini-tournament in Lisbon, with the quarters, semis and final all being hosted in the Portuguese capital over an 11 day period, with the Citizens playing French side Lyon in the last eight on August 15 after they knocked out Juventus on away goals.

“I just spoke with the scouting department (about Lyon) and they told me to be alert,” the Catalan warned. “We have eight days to prepare for it. We will enjoy it and then after we will think about Lyon.”