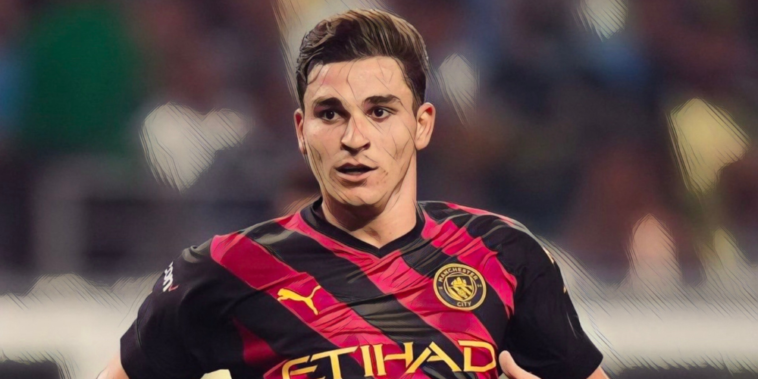 Alvarez made his first appearance for the club as the Premier League champions beat Club America to begin their pre-season tour with a win, a first-half brace from Kevin De Bruyne earning City a 2-1 win at Houston’s NRG Stadium.

The 22-year-old – who signed from River Plate in January before joining up with City this summer – impressed with his work-rate off the ball and quality in possession.

Guardiola was delighted with the performance of the Argentine and believes City have signed ‘a top-class young player’.

“Julian (Alvarez) was incredible, defensively he is quite similar like Gabriel (Jesus),” Guardiola said, as per mancity.com.

“Gabriel is probably the best, but he is close to him in aggression and how intuitive he is, he makes the runs and with the ball he’s absolutely brilliant.

“He can keep the ball and you can link with him without a problem.

“We have the feeling we signed a top-class young player for the next years to come, and we are delighted.

“The job that Mareclo Gallardo did at River Plate, we have the benefit, and hopefully he can grow up in an important league like Premier League.

“All the young lads did really well, and Stefan (Ortega Moreno), he did well.

“Kalvin, he already knows perfectly (the Premier League) – he needs time to understand what we want him to do and help him with his movements and shapes. We are very pleased.”

Guardiola also spoke on De Bruyne’s performance after the midfielder scored both goals in the win and believes a full pre-season can ensure the Belgian kicks on from a career-best campaign in front of goal last season.

“Last pre-season he arrived in bad conditions because of injuries,” said Guardiola.

“He took a long time to get his best condition but the start of this season was the opposite.

“We saw in sessions he’s sharp and strong and he continued with the same level as last season, it was his best season in terms of scoring goals and he’s started really well.”

Read Also – Martinez next? – Five legendary centre-backs who were under 6ft