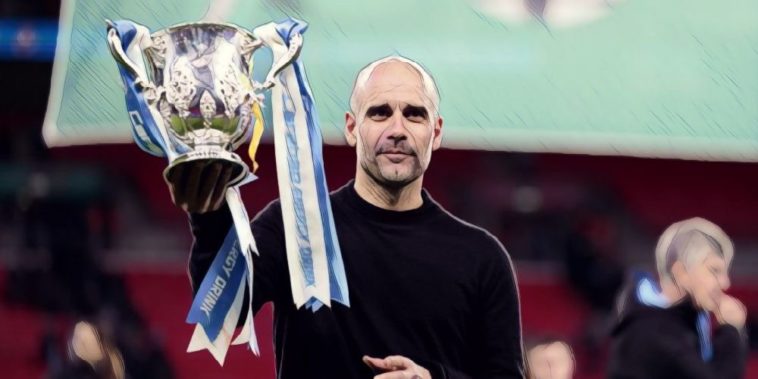 Pep Guardiola has insisted he is ‘incredibly satisfied’ with Manchester City’s achievements, despite surrendering their title with seven games to play.

Man City have enjoyed record-breaking success over the last few seasons, becoming the first team to win back-to-back titles in a decade, racking up a hugely impressive 198 points over the previous two campaigns.

However, the 2-1 loss to Chelsea last week saw the Citizens surrender their crown with seven games still to play, the Citizens having already lost eight league games so far this season.

Speaking ahead of Thursday’s game against the newly crowned champions, Guardiola has insisted he is ‘incredibly satisfied’ with everything his side has achieved, the Etihad outfit having already won the league cup this season, and having moved into the latter stages of the FA Cup and Champions League.

“In sport, you have to prove every time,” Guardiola said at his pre-match press conference. “We are incredibly satisfied with what we have done and are doing, but for athletes, it is never enough.

“The past is the past, we have entered our memories, but the show must go on. [It is] a new chapter in our lives, we have to live it. The memories are nice but people who say I don’t have to show anything, I don’t completely agree. Every time you have to do it.”

The Catalan was also full of praise for Jurgen Klopp and his brand of football, Liverpool on course to break a whole host of records this season, most of which have been recently set by City.

“I think as a human being first,” he added. “I don’t know him that well but I admire him and the way that his teams play football.

“It is a benefit for the world, positive to try to score a goal. This kind of manager helps a lot. He wants to win, I want to win, but when it is finished, the game is over.

“He’s my colleague and, of course, I want to have a good relationship with managers. We are not close, every day in touch, but the relationship has to be there.”