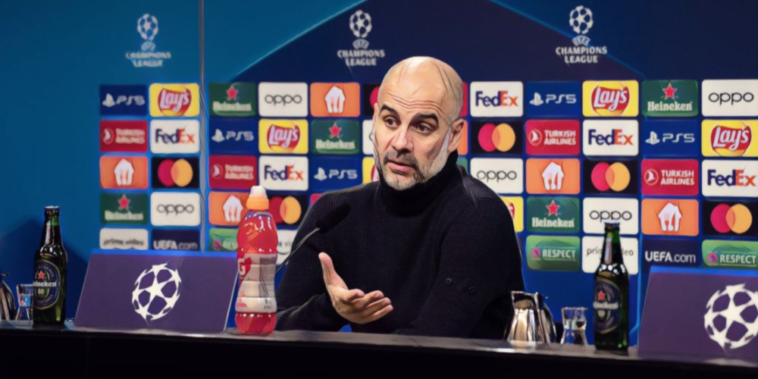 Pep Guardiola has hinted that he will rotate his squad ahead of Manchester City’s clash with Sevilla this week.

City take on the Spanish side in their final group stage fixture on Wednesday evening, with progress to the Champions League’s last 16 as group winners already assured.

Guardiola insists that he wants to conclude the club’s group stage campaign with a win, but suggested he will look to provide minutes to some of the fringe members of his squad.

“We want to win the game. It is a moment to continue practicing things,” Guardiola said at his pre-match press conference.

“I will have to see [who starts]. The players who didn’t play regularly are going to play for sure.

“Let me see the training session and tomorrow you will see it [the team].”

One player who could be included is Cole Palmer, with the academy graduate having featured for just 167 minutes across all competitions so far this season. The 20-year-old has been eased into the senior set-up under Guardiola as he looks to follow Phil Foden’s example in becoming a key figure in the side.

“He doesn’t have to show me anything special,” Guardiola said on Palmer. “I will have to see the training session and after I will decide who starts.”

Guardiola did provide an update on Erling Haaland and confirmed the Norwegian would again be absent. Haaland missed the win at Leicester last weekend, but could return in time to face Fulham on Saturday.

“He feels better. Every day he feels better but we don’t want to take a risk. Hopefully we can have him against Fulham.”