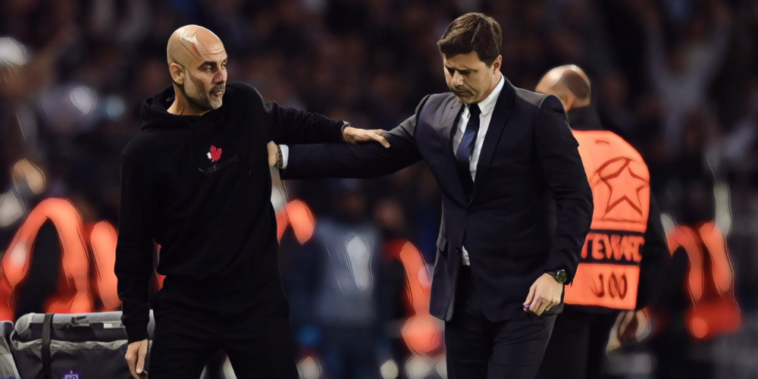 Pep Guardiola has praised Mauricio Pochettino as a ‘top manager’ amid speculation linking the Paris Saint-Germain coach with the Manchester United job.

Guardiola will renew rivalries with Pochettino tomorrow evening as Manchester City face PSG in the Champions League’s group stages, where a win for City will be enough to secure qualification to the next stage as group winners.

The clash comes amid mounting speculation surrounding Pochettino’s future at the Parc des Princes, with the Argentine reportedly the leading candidate to replace the sacked Ole Gunnar Solskjaer at Manchester United.

Guardiola has praised his opposite number as an ‘excellent’ manager and says silverware is not necessarily the standard on which Pochettino should be judged.

“I am sure managers are better every year. Every season you have a lot of learnings. I am pretty sure he [Pochettino] is an excellent manager,” he said.

“You can be a top manager and not win titles. For the managers who have chance to win is because you are at top clubs, with good investment and top players. That doesn’t mean managers in the Championship or not at the top of the Premier League aren’t excellent managers.”

Tomorrow’s clash with also see Guardiola face off against Lionel Messi once more, the latter having scored his first PSG goal during the first meeting between the teams in Paris.

Guardiola coached Messi during his time at Barcelona and has regularly declared the six-time Ballon d’Or winner as football’s finest talent, with the Spaniard conceding his side face a huge challenge to stop the Argentine.

“It’s so difficult. Sometimes when he [Messi] has the ball, you don’t know what to do – not even he knows.

“Every player could be a star at teams around the world but all four are in the same team. I am so happy he is still playing and the level he plays and the quality.”

Guardiola believes the achievements of Messi and Cristiano Ronaldo will be ‘almost impossible to imitate’, admitting he is unsure whether the feats of the record-breaking duo will ever be repeated.

“What these two guys have done will be almost impossible to imitate, maybe we will see it but I don’t think it will happen. It’s unique, I think.

“To find two players like Cristiano and Messi, and for them to do what they have done.”