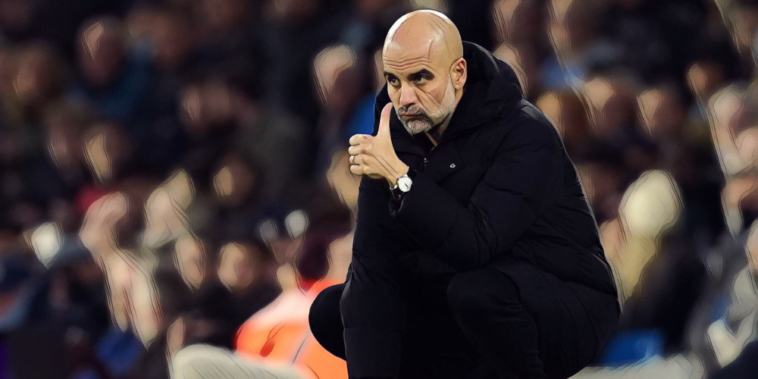 Pep Guardiola says he is ‘delighted’ with how Manchester City are positioned ahead of the season’s run-in.

Guardiola’s side are top of the Premier League, but last weekend’s 3-2 defeat to Tottenham – coupled with Liverpool’s midweek win over Leeds – has seen the champion’s lead cut to just three points.

City also remain in contention for the FA Cup and will face Peterborough in the fifth round on Tuesday, whilst the club also hold a huge advantage after beating Sporting Lisbon 5-0 in the first leg of their Champions League last-16 tie.

City travel to face Everton in the Premier League this weekend and ahead of the clash Guardiola says he is delighted with the position his side are in ahead of the business end of the campaign.

“We know it’s a long road. We try to be ourselves every single game. Not just in the Premier League, in all competitions and it’s nice to be there,” he told his pre-match press conference.

“I am more than delighted to be in the position we are. We try to defend and attack better and try to win games. The Premier League is so tough and we know it.”

Last weekend’s loss to Spurs was a rare disappointment in City’s season so far, with Harry Kane scoring a stoppage-time winner for the north Londoners at the Etihad.

Guardiola was questioned on how his side would respond to the defeat and says City have shown in the past their strength to recover from setbacks.

“In the past we were able to do it, I never thought about that, I think tomorrow is Goodison Park against Everton with a new manager and they need points.