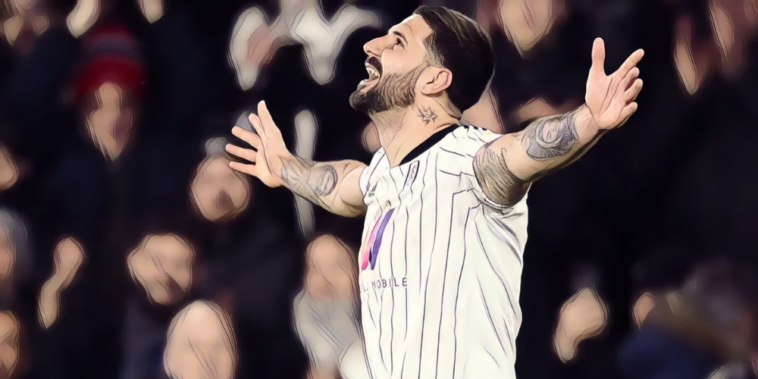 Aleksandar Mitrovic’s sensational season with Fulham has fired the club’s push for promotion, the forward having enjoyed a record-breaking season in the Championship.

Mitrovic’s incredible campaign has seen the Serbian break the division’s all-time goal record, with the 27-year-old having now scored an astonishing 43 goals in just 43 league appearances this season.

Mitrovic has now scored 81 goals in just 100 league appearances in England’s second tier, having often proven a cut above the Championship during Fulham’s yo-yo existence between the top two divisions in recent seasons.

His goals this season have propelled the Cottagers back into the top flight as Championship winners and we’ve decided to look back at the most prolific seasons in Championship history.

Jordan Rhodes earned his stripes in the lower leagues before making his mark further up the pyramid, bursting onto the scene with a prolific period at League One Huddersfield after failing to make the grade at Ipswich.

Rhodes fired Huddersfield to promotion to the Championship ahead of the 2012/13 season, but after just two appearances and two goals made an £8m club-record move to a Blackburn side who had just been relegated from the Premier League.

The Scotland international wasted little time in making an impact at Ewood Park and scored a further 26 league goals for the season despite featuring in a struggling side, finishing as runner-up for the division’s Golden Boot.

Rhodes reached 20+ league goals in each of the next two seasons for Rovers but was unable to fire the club into promotion contention, Blackburn finishing just outside the play-off places in the following two seasons after a disappointing 17th-placed finish in 2012/13.

Among the Championship’s most reliable sources of goals at his peak, Ross McCormack has reached 15+ league goals on five occasions in the second tier including a Golden Boot-winning season in 2013/14.

McCormack began his career in Scotland before moving south of the border, impressing during a three-year spell with Cardiff to earn a move to Leeds.

The Scottish forward enjoyed arguably the best period of his career at Elland Road, scoring 58 goals in 158 appearances in all competitions including a 28-goal Championship season in his final campaign with the club.

Norwich bounced back to the Premier League at the first attempt last season, securing a second promotion from the Championship in just three campaigns.

Teemu Pukki starred in both of those promotion-winning seasons and scored a staggering 29 goals as the Canaries won the Championship title in 2018/19, the Finland international named as the division’s Player of the Season.

Pukki’s performances since joining Norwich have been nothing short of sensational in the second tier, scoring 55 goals in just 84 appearances during his two seasons in the Championship.

Norwich, however, have once again failed to ensure survival and Pukki will return to the Championship again next season after the Canaries relegation was confirmed last weekend.

In any ordinary season Dominic Solanke would have had a strong chance of winning the Golden Boot, with the Bournemouth forward having scored 29 league goals for the Cherries in 2021/22.

Solanke has taken time to find his feet at senior level after being backed by Jose Mourinho to become an England regular during his time in Chelsea’s academy, struggling for opportunities and goals after moving from West London to Liverpool.

The 24-year-old netted just three league goals for Bournemouth in the top division after a £19m switch to the South Coast, but has developed into a prolific presence in the second tier.

After scoring 15 goals last season he has managed 29 for Bournemouth this season, a haul which has fired the Cherries into contention for promotion to the Premier Leagie.

Solanke’s form over their final fixtures will be crucial to their chances.

Up until last season, Glenn Murray was the only player to have hit 30 goals in a Championship campaign.

The well-travelled striker signed for Crystal Palace on a free transfer in 2011, but after scoring just six league goals following his initial step up from League One, few expected his incredible impact the following campaign.

Murray plundered a huge 30 goals to fire Crystal Palace into the play-offs, the forward the only Eagles player to reach double figures for the campaign on his way to a record-breaking season.

Kevin Phillips’ penalty sealed promotion in the play-off final against Watford, but it was Murray’s brilliant individual season that laid the foundations for Palace’s Premier League return.

Toney’s record has lasted for just one season following Mitrovic’s exploits, with the forward having enjoyed an outstanding first season with Brentford following his summer arrival from League One.

Toney had been named as the third tier’s Player of the Season in 2019/20 and scored 40 league goals across two seasons for Peterborough, before making an immediate impact with Brentford.

His pace, power and ruthless finishing ability – mixed with a driven desire to improve and test himself at the highest level – made the forward arguably the star of the 2020/21 Championship season.

Toney’s campaign ended in dream fashion with the opening goal as Brentford sealed promotion after beating Swansea in the play-off final.

The 25-year-old had failed to make the grade at Newcastle after signing from Northampton as a teenager, but has worked hard on his game in the seasons since to become a Premier League player.

He has been an important part of the Brentford side during a solid first season for the Bees in the top division, with only Harry Kane (13) having managed more than Toney’s 12 goals among English players.

Having struggled to make an impact under Scott Parker during Fulham’s relegation last term, the forward has bounced back under Marco Silva to enjoy an extraordinary campaign.

Aleksandar Mitrović gets his 43rd goal of the season and BREAKS Guy Whittingham's second tier record with the last kick of the game!! 🤯🔥 pic.twitter.com/jtuT0pN7TW

Mitrovic has scored 43 goals in just 43 league appearances for the free-scoring Cottagers, adding a further seven assists for a Fulham side who clinched the Championship title this week.

Fulham have scored a staggering 106 goals this season with Mitrovic at the heart of their success and attentions have now turned to continuing their upward curve in the Premier League next season.

Fulham have failed to consolidate in the Premier League in recent years, but look better equipped than ever with Mitrovic ready for another shot at the top division.