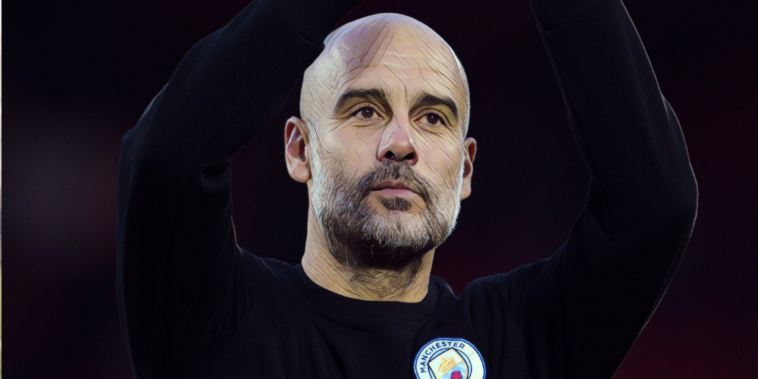 Pep Guardiola has called for focus from Manchester City and has discussed his future and legacy at the club.

Guardiola’s team are three points clear of Liverpool with two games remaining, but a run of five consecutive wins and 22 goals scored means the league leader’s goal difference is seven greater than their nearest challengers

Guardiola spoke on the importance of his side remaining focused ahead of the trip to the London Stadium and says he is expecting a tough test against a Hammers side who have enjoyed ‘two extraordinary seasons’.

“Two games to go, every three points we win is so important,” Guardiola told his pre-match press conference.

“Still we need six points, we have to make the three then after try to do the last one at home. Just focus on ourselves.

“West Ham have done two extraordinary seasons, this season in the Europa League, they weren’t lucky in the home game against Frankfurt and with 10 men in the away leg. An incredible season, so strong in all departments, set pieces, the quality upfront, with Lanzini, Fornals, Bowen.

“A top side, difficult, but we know how important it is to get three points. An incredible step to try and finish the job at home with our people.”

Guardiola’s future remains uncertain with the 51-year-old set to enter the final 12 months of his deal at the Etihad this summer.

The City boss insists his drive remains ‘the same’, but says his focus is on achieving results and not his long-term future.

“I’d say the same, players can be playing a lot the previous season and next not playing,” he said. “They have contracts, some leave. I am the same.

“First depends on results, we have to win otherwise they change. We all have to see, it’s about the business, about results. Not about if you’re comfortable. I don’t complain one second about how satisfied I am here working, it’s about results. After six seasons, it’s about working hard. After we decide together.”

Guardiola is closing in on a fourth Premier League title and has won a further five domestic cups, but says he wants to be remembered for bringing ‘fun’ to the Etihad.

“We have fun,” he said. “That is the best legacy, when we are in something in our lives, doesn’t matter if professional, you have fun.

“Football is nice because behind you is a lot of people, our fans. I want City fans to say in that period we were fun, we play good, this is the best legacy. Emotional, give something unique watching our games, that is the best reward.”