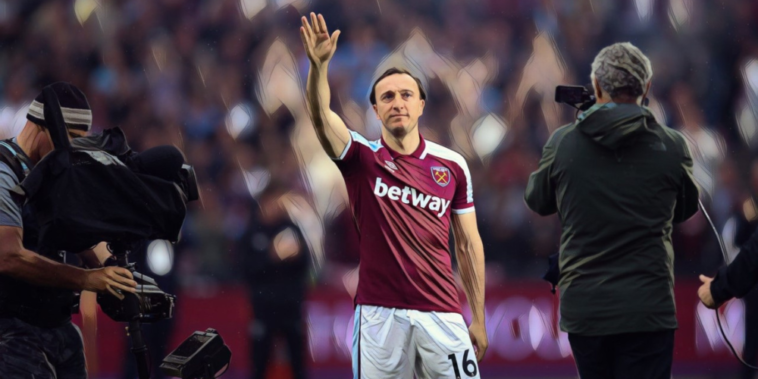 Time waits for no one and there’s been a number of high-profile names from the Premier League’s past and present who have recently called time on their careers.

With the legs a little older and the body beginning to creak, a whole host of ex-Premier League stars have said their farewells to the game.

Here are ten former Premier League regulars who have retired in 2022.

Mark Noble called time on his West Ham career at the end of last season with the London Stadium an emotional environment as he took to the pitch for the final time. Noble – born in Canning Town, just over a mile from the Hammers’ former Upton Park home – was a boyhood Hammer who fulfilled his dream, representing his side for almost two decades.

Having broken into the team as a teenager, he made 550 appearances for the club and scored 62 goals, with brief loan spells at Hull and Ipswich the only time spent away from East London.

The midfielder was visibly emotional during a brilliant send-off against Manchester City, in which he addressed a packed London Stadium who had remained after full-time to bid farewell to ‘Mr West Ham’.

“I couldn’t believe it was me,” he told BBC Sport.

“I couldn’t believe there was not a spare seat in the stadium. I was truly honoured. I have been involved in football for a long time. I don’t think I have seen a send-off like that before.

“Years and years ago, there were a lot of local boys playing in their teams. But times move on. Most teams at Premier League level have scouts in every country in the world. Agents know every player with potential.

“I came through as a West Ham fan and lived, not just every West Ham fan, but every fan’s dream. To play for and captain the team you grew up supporting, is why millions of people in this country pay a lot of money to go and watch their teams. They have that affiliation and loyalty.”

Noble has wasted no time in taking the next step in his career. He will take over as West Ham’s sporting director in January after completing a Harvard business course.

Ben Foster decided to hang up the goalkeeper gloves this summer, having deliberated whether to continue in the Premier League after leaving Watford.

The 39-year-old made 26 league appearances as the Hornets were relegated last season, but decided not to continue his career despite an offer from Newcastle.

Congratulations on an amazing career!

Foster – who won eight England caps and three League Cups with Manchester United and Birmingham combined – has moved into a successful media career with his YouTube channel (The Cycling GK) and Podcast (Fozcast) attracting large audiences.

John Obi Mikel announced his retirement in September, declaring himself “very satisfied with all I was able to achieve” in the game.

The Nigerian midfielder rose to prominence after finding himself at the centre of a transfer tussle between Chelsea and Manchester United, with the former forced to issue compensation to the latter following a complicated and controversial deal.

Mikel spent a decade in west London and made 372 appearances in all competitions, while his list of accolades include two Premier League titles, three FA Cups and the Champions League. Mikel also won the Africa Cup of Nations in 2013, during a career with the Super Eagles that brought 89 caps. He had short spells with Middlesbrough and Stoke during the latter period of his career.

Jack Wilshere’s career never lived up to its thrilling early promise with fitness issues having plagued a talent once billed as the future of English football.

His career was still one of much success, with two FA Cup winners’ medals, two Goal of the Season accolades and a PFA Young Player of the Year award a testament to that. Wilshere burst onto the scene as a teenager and a fearless performance against Barcelona in the Champions League remains arguably the game most define him by.

He made 197 appearances for Arsenal and also had spells at the likes of Bolton (loan), Bournemouth and West Ham, though his body continually failed him. Wilshere earned 34 caps for England, a number that would have swelled significantly had fitness allowed. His retirement, aged just 30, is tinged with sadness and a wonder at what might have been.

Aleksandar Kolarov formed part of an emerging Manchester City team during the infancy of their billionaire-backed era, having signed for the club from Lazio in 2010.

He made 247 appearances for the Citizens and scored 21 goals, with the Serbian an attack-minded full-back who possessed a thunderous shot from distance. Upon leaving the Etihad he had spells with Roma and Inter Milan, but fitness issues plagued his time with the latter despite Serie A title success.

What a left foot! 💥#OnThisDay in 2010, we signed Aleksandar Kolarov! 💪#ManCity pic.twitter.com/lfjcmY6FhL

Kolarov – who earned 94 caps for Serbia at international level – has announced his intention to train as a sporting director and scout at the National Football Centre of the Football Federation of Italy.

Jermain Defoe scored goals wherever he pitched up in his career, with 325 scored for club and country at senior level.

A teenage prodigy at West Ham before successful spells at Tottenham, Portsmouth and Sunderland, he scored 162 goals in the Premier League alone – a total just eight players can better.

He remains one of just five players to score five goals in a single Premier League fixture, following a phenomenal clinic of finishing as Spurs thrashed Wigan 9-1 in 2009. At international level he struggled for a regular role with England, but netted an impressive 20 goals in 57 caps, of which just 22 came from the start.

Defoe also had spells in MLS and at Rangers and won the Scottish Premiership with the latter in 2020/21, having joined up with former England teammate Steven Gerrard at Ibrox.

Mousa Dembele spent seven seasons stamping balletic authority on the Spurs midfield, a footballer who glided past Premier League players with ease and whose deceptive strength bulldozed many an opposition engine room.

It became a running theme for Spurs players to give one answer when asked for their best player, during the peak seasons of Dembele’s time with the club.

A footballer’s footballer, the statistics should be forgotten when discussing the unique gifts of Dembele, who retired earlier this year after a spell in China.

“He’s a freak of nature, physically he’s a monster and he’s got ballerina feet at the same time, it’s quite special,” Eric Dier said on the midfielder. Dele Alli, Victor Wanyama and Harry Winks were also among the teammates to anoint Dembele as the club’s best. In a side that contained the likes of Christian Eriksen, Son Heung-min and Harry Kane, that’s some accolade.

Carlos Tevez’s colourful career came to a close during the summer, a tale which saw Tevez become both a Premier League hero and pantomime villain.

His arrival at West Ham, alongside compatriot Javier Mascherano, remains one of the most remarkable deals in the division’s history as two of world football’s brightest prospects were paraded by Alan Pardew at Upton Park.

He spent just a single season with the Hammers but departed as a club icon, after a spectacular run of form secured survival in the Premier League.

Tevez signed for Manchester United and formed one of Europe’s great front threes at Old Trafford, as the Argentine wreaked havoc alongside Cristiano Ronaldo and Wayne Rooney as the Red Devils won a Premier League and Champions League double in 2007/08. He added a second league title the following season, before a controversial cross-town switch to Manchester City.

He scored 73 goals in 148 appearances at the Etihad, becoming a key figure in the early part of City’s rise to success. Fantastic football was mixed with fall-outs and controversy, with there rarely a dull moment in the career of El Apache.

Tevez – who also had success at Boca Juniors, Corinthians and Juventus – was announced as manager of Argentine side Rosario Central just weeks after his retirement.

The Slovakian centre-back made 320 appearances for Liverpool between 2008 and 2016, having signed from Zenit St Petersburg.

Skrtel was a combative defender and was named as the Reds’ Player of the Season in 2011/12, while his threat from set-pieces was evident during a seven-goal Premier League campaign in 2013/14

He won the League Cup during his time at Anfield and over a century of caps for the national side, before calling time on his career after spells in Turkey, Italy and his homeland. Skrtel is maintaining his fitness with minutes for a Slovakian amateur side – where he now operates at centre-forward.

“When I was leaving Slovakia when I was 19 years old before I went to Russia, I gave the word to one of my friends that one day when I retired from professional football, I will come back to this village,” he told Liverpool’s official website.

“Since I retired, I was getting phone calls from him almost every day and he was asking me. I played two games and we will see how many more I will play. It’s fun. I’m 37 but I’m the second-youngest in my team, so it’s funny. Also, I changed position because at the moment I’m playing like as a No.9 or a false nine. I’ve played two games and scored three goals!”

Fabian Delph’s retirement caused some surprise last month after the former England midfielder announced he was hanging up his boots after leaving Everton.

OFFICIAL: Fabian Delph has announced his retirement from professional football at the age of 32. pic.twitter.com/BJcqSmadzo