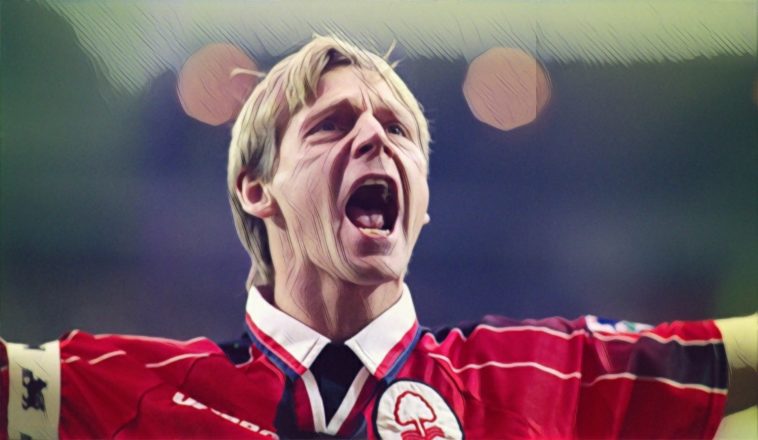 Our Golazo Merchants series has included some stellar attacking talents to date but the latest in our collection revisits the story of a no-nonsense defender, a player whose commitment to the cause was abundantly visible during a career at the top of the game.

Stuart Pearce is regarded as one of the finest full-backs England has produced and his tough-tackling approach won the former Nottingham Forest captain plenty of plaudits throughout his career, though it’s his penchant for the spectacular which takes our focus here.

Pearce’s footballing career began in the humble surroundings of non-league Wealdstone, where he combined his work as an electrician with his passion for football – spending five seasons with the part-time outfit before his talents earned attention from higher up the English footballing pyramid.

Top-flight Coventry City made their move for the combative left-back and he signed for the Sky Blues for £30,000 in 1983, the 21-year-old stepping up to the professional game after previously rejecting an offer from Hull City.

Pearce spent two years with Coventry before being brought to Nottingham Forest by Brian Clough, the uncompromising defender used as a makeweight in a deal that saw Forest centre-back Ian Butterworth head to Highfield Road.

It proved to be an inspired piece of business for Forest who secured a player who would prove to be a mainstay of the side for more than a decade, making 522 appearances in all competitions and winning two League Cups.

Whenever Pearce set foot onto the pitch – he meant business.

It mattered little whether that came in the form of clattering opponents with bone-crunching tackles or hitting balls with thudding power, the full-back mastered both and rampaged forward to great effect from his station on the left-flank.

This goal against Charlton in 1989 demonstrated Pearce’s threat when in attacking territory, an outside-of-the-boot peach which left the goalkeeper motionless as it crashed into the net.

FORGOTTEN GOAL: Stuart Pearce bombing forward and scoring a shitpinger with the outside of the boot 31 years ago today.

The celebration? Shake hands and get on with the fucking game.

His uncompromising nature sent shivers down the spine of opposition wingers, whilst those tasked with forming defensive walls must have surely feared the worst whenever the thunder-thighed full-back lined up a free-kick from distance.

Pearce developed a reputation as a set-piece specialist through his career at the summit of English football, with this thunderous effort amongst the most spectacular efforts in FA Cup final history.

Forest faced Tottenham at Wembley for a chance to win world football’s oldest domestic competition in 1991, and were presented with an opportunity just outside the box following Paul Gascoigne’s challenge on Gerry Charles – a tackle which famously saw Gazza injure himself and stretchered from the field.

Pearce – with trademark long run-up – unleashed an unstoppable rocket of an effort into the top corner to give Forest the lead, goalkeeper Erik Thorstvedt left with no chance as the left-back let fly to open the scoring in stunning style.

Tottenham fought back to secure the trophy in extra-time and leave Pearce with only a runners-up medal, though his set-piece special was a huge highlight of a memorable final in the capital.

Free-kicks were a key part of Pearce’s attacking armoury during a career that saw him score over a century of goals for club and country, the defender perpetrating maximum violence upon any dead-balls that lay in his destructive path.

Manchester United were victims of Pearce’s precision and power on more than one occasion during his time at Forest, including this breathtaking winner at Old Trafford.

Few players would possess the audacity to go for goal from that distance, but fewer players still possessed the venom, velocity and technique of Psycho.

Firmly established as club captain and one of the greatest players in Forest’s history, Pearce’s love-affair with the East Midlands side came to an end during the nineties, the club falling from the status of challengers for silverware to endure a yo-yo existence during the first decade of the Premier League.

Having stayed loyal after one relegation to lead Forest to promotion, a second drop into the second tier saw Pearce move on, signing for Newcastle in a bid to prolong his career at the highest level.

Pearce spent two seasons at St James’ Park but failed to replicate the goalscoring form of his Forest career, though in typical fashion his sole goal for the Magpies was one for his ever-growing highlight reel of thunderbastards from distance.

Dynamo Kyiv were the visitors to the North East for a Champions League encounter under the lights, but it was Pearce who illuminated the occasion with a rifled finish from all of 30-yards.

Presented with a free-kick opportunity, Pearce worked a new angle with a short pass, before rifling an effort into the top corner. A desperate Dynamo defender did his utmost to block the effort, though it is perhaps fortunate for all parties concerned that he failed to get in the way of a ferocious effort.

West Ham was Pearce’s next port of call as he returned to his native London, signing a two-year deal with the Hammers and proving a hugely popular figure during his time in the East End of the capital.

He racked up 50 appearances for the club during the twilight of his career and scored three goals, including this blockbuster of an effort in an FA Cup quarter-final tie against rivals Tottenham at Upton Park.

Trailing 1-0 to a stunning Sergei Rebrov effort for the visitors, Pearce slammed home an archetypal equaliser with a fine free-kick to level the scores.

Minimum fuss, maximum power – it was goal that proved to be Psycho’s signature during an illustrious career as a Golazo merchant.

After being named as West Ham’s Player of the Season he signed for Kevin Keegan and Manchester City in the summer of 2001, scoring a trademark free-kick on his debut and helping the club to promotion to the Premier League in what was his final season as a player.

Aggressive, combative and ferociously competitive by nature, Stuart ‘Psycho’ Pearce was many things during a memorable career for both club and country. Whilst his dogged defensive grit may be the foundation of his success story, there is no disputing his status as a thunderbastard exponent and his place amongst our Golazo Merchants.