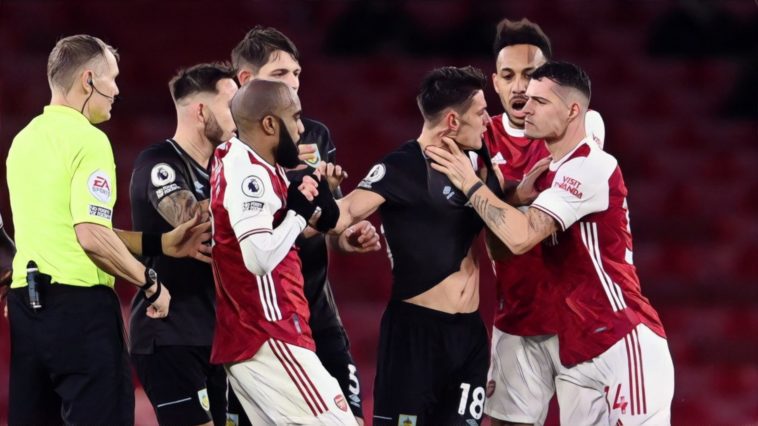 Mikel Arteta has backed Granit Xhaka following his costly red card against Burnley and has praised the Arsenal midfielder’s professionalism and commitment.

Xhaka was sent off during Arsenal’s disappointing 1-0 defeat to Burnley at the Emirates last weekend, the Switzerland international dismissed after grabbing Ashley Westwood round the throat with the score goalless.

It was the latest moment of rashness from the 28-year-old and it proved costly as the Gunners slipped to defeat, losing a fourth consecutive home league fixture for the first time in over 60 years to continue the club’s worst ever start to a Premier League season.

Xhaka’s temperament has been questioned previously and there were suggestions this week that Arsenal would listen to offers for the midfielder, with Arteta having branded the star’s actions as ‘unacceptable’ post-match.

However, Arteta has now come out in defence of the under-fire Xhaka and has praised him as a model professional, insisting the midfielder conducts himself in the right manner despite his costly ‘mistake’.

“What I can say about Granit is his professionalism and his commitment with the club and with his team is maximum,” Arteta told the press ahead of his sides clash with Southampton at the Emirates tomorrow.

“He knows and we all know he had a moment where he lost it. And I know the reason why but what I cannot do is just take everything he has done away because he has made a mistake.

“We all make mistakes and I am here as well to protect the players when I see that they deserve that and for sure Granit is one of them for the way he approaches every training session.

“The way he wants to do things in the right way all the time and the professional that he his.”