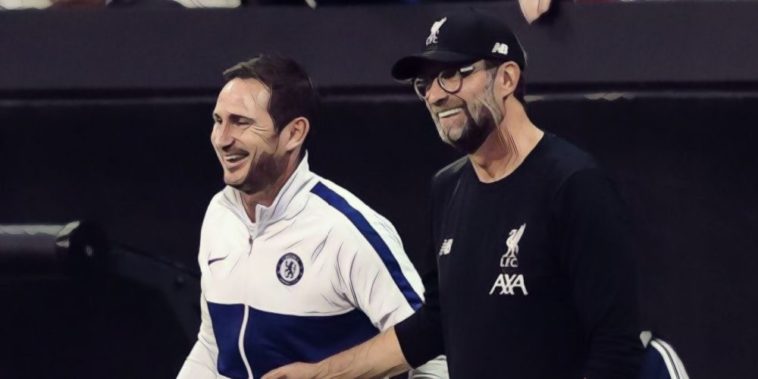 Frank Lampard has discussed Liverpool’s ‘journey’ to the summit of English football as he prepares his Chelsea side to face the Reds in the FA Cup fifth round tonight.

Chelsea welcome their Merseyside rivals to Stamford Bridge this evening as they bid to seal their progress to the quarter-finals of the FA Cup, with Lampard well aware of the task facing his side against the reigning European champions and Premier League leaders.

Liverpool have flourished under the management of Jurgen Klopp in recent seasons and are now regarded as arguably the finest club side in world football, and ahead of tonight’s clash, Lampard has opened up on their opponent’s ‘journey’ to the top and his own plans to strengthen and rebuild in west London.

“I remember them linking and raising their arms when they drew 0-0 with West Brom. [They were] Probably slightly ridiculed for it at the time but it is now symbolic of the journey of this team that is now an absolute machine, rolling everyone over until the last game.

“So, it’s a reference point in terms of when you see what a work in progress looks like. It can take time and behind a team that wins so many on the bounce is a lot of sweat and hard work from everyone involved, which is what I am trying to do here.

“As part of their journey, they have signed some fantastic players at the right times, ones that feel pivotal. Virgil van Dijk and Alisson, the keeper – they have a great knack of signing the right player at the right time that suits the way they want to play and keep moving forward.

“It’s a great model in those terms but I don’t want to look anywhere near like I’m comparing us now. I’m under no illusions but what I do understand is that behind their story is a lot of hard work they have been prepared to do.”