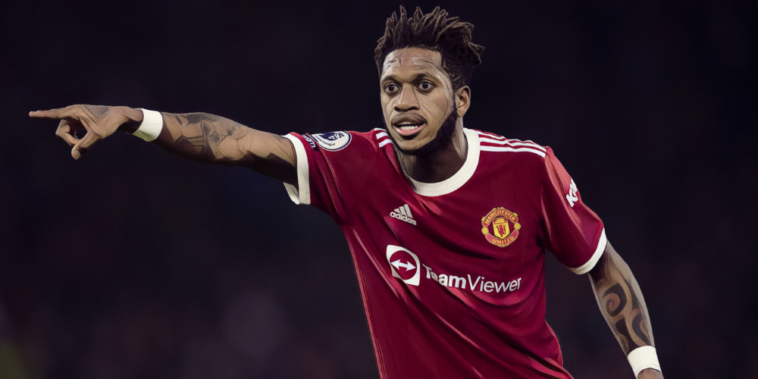 Fred admits it is ‘strange’ having an interim manager in charge of Manchester United as the club continue their search for a new permanent appointment.

Ralf Rangnick has been appointed on an interim basis until the end of the season following the decision to sack Ole Gunnar Solskjaer in November, with the German coach having lost just once in 12 league fixtures despite a mixed period of performances.

Fred has seemingly questioned the club’s lack of a long-term plan and admits it is ‘strange’ to currently be working under a coach who will move on into a new consultatory position at the end of the campaign.

“It is a bit strange,” he told TNT Sports.

“I know in football it’s important to get good results as soon as possible, but it’s also important to have a long-term plan.

“I think it’s a little bit bad for us not to have one, at the moment it’s all about the short-term goals.”

Fred – who has actually enjoyed an upturn in form under Rangnick – also discussed his ambition to win trophies with Manchester United, with the Red Devils having gone four full seasons without silverware.

The club suffered a disappointing FA Cup exit to Middlesbrough last month, but will resume their Champions League campaign against Atletico Madrid in the last 16 on Wednesday evening.

The Brazil international spoke on his desire to end United’s long drought without a major trophy and says each of the squad must share the same ambition as the club look to challenge.

“Every player that comes to this club wants to win titles,” said Fred.

“It’s the same with me, Bruno [Fernandes], Alex [Telles], Cristiano [Ronaldo], [Jadon] Sancho, all of us. We want trophies but it’s been a long drought.

“With all due respect to Villarreal, it was our job to win that Europa League final and we failed. It’s about having a better football planning on the club.

“If you don’t want to win titles you don’t deserve to play for Manchester United. We’re still in the Champions League but let’s see if we arrive better on next season to find our peak football.”