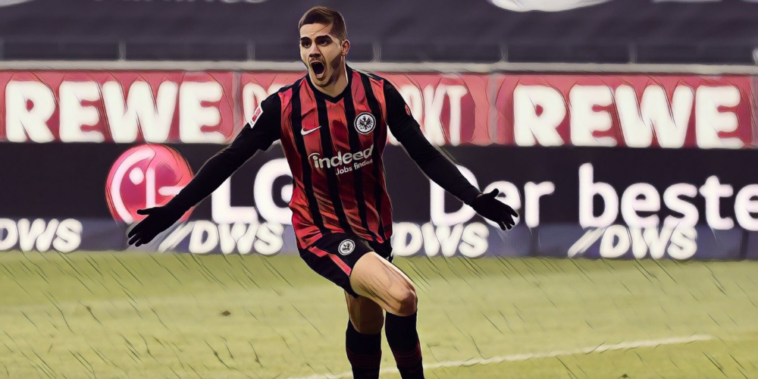 Andre Silva admits speculation linking him with a move to Manchester United is just ‘rumours’, but admits reported transfer interest provides him with ‘more motivation to work’.

Silva has been in superb form for Eintracht Frankfurt this season and has found a home with the Bundesliga side following difficult periods at AC Milan and Sevilla, scoring 19 league goals in just 21 appearances this season to trail only Robert Lewandowski amongst Germany’s leading scorers.

The Portugal international’s fine form has led to speculation Manchester United are considering a move, with the Red Devils considering their centre-forward options this summer amid the uncertainty surrounding Edinson Cavani’s future and Anthony Martial’s poor performances.

Silva has now discussed talk of a potential move and admits he is flattered by links with the Premier League side, admitting transfer talk is a sign of what he has ‘accomplished’ since arriving at Frankfurt.

“I’ve heard rumours, but that is it,” Silva said, as per The Mirror. “Rumours are rumours.

“At the end of this season, it’s something that gives me more motivation to work, it’s a sign that what I have accomplished has borne fruit and the path has been good.”

Atletico Madrid have also been linked with the 25-year-old, who jokingly suggested that any interested suitors would have to splash out for his services if they are to prise him away from the Bundesliga this summer.

“When we sell our merchandise, we always increase the value a little bit.

“Things are as they are and, whatever happens around us, the most important thing is to look at me and what I can do.”

Silva initially rose to prominence at Porto before a €38m move to AC Milan in 2017, and has scored 16 goals in 37 appearances for Portugal at international level.