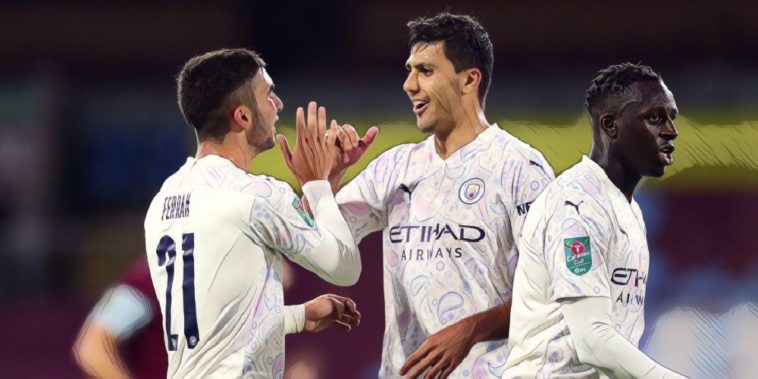 Pep Guardiola insists there’s more to come from Ferran Torres as Manchester City’s new signing was instrumental in the 3-0 win over Burnley saw them progress to the Carabao Cup quarter-finals.

Having been beaten 5-2 by Leicester at the weekend, Man City got back to winning ways with a 3-0 win at Turf Moor, the holders finding themselves ahead late in the first half through a delightful Raheem sterling finish, the England international teed up by a low cross from left-back Benjamin Mendy.

Sterling had a second soon after half-time, this time summer signing Ferran Torres the provider, sliding the ball across the box for City’s number seven to calmly slot home.

Torres then capped his excellent performance with a goal, the Spaniard curling his low effort into the far corner to seal his side’s passage into the next round and set Guardiola on his way to potentially his fourth League Cup triumph in a row.

“It was good,” Guardiola said. “This competition is special for us. Two games, this one and Leeds before the international break. After our result (against Leicester) it was important to win.”

One of the more pleasing aspects of the performance for the City faithful will have been that of 20-year-old summer signing Torres, yet Guardiola revealed there was still more to come from his ‘clever’ new man.

Delighted to bag my first goal as a Sky Blue, and to progress in the cup! ⚽️🏆 HERE WE GO! 🐬💙 @ManCity pic.twitter.com/BmLmhK8A6z

“He is a young player and still needs a little bit of time to understand what we want to do,” said the former Barcelona boss. “He’s clever in the final third, with his passes. He doesn’t cross to cross, he passes the ball.”

The clash at saw Guardiola hand a debut to 18-year-old Palmer, City still suffering with the absence of first-team regulars Sergio Aguero and Gabriel Jesus – among others – through injury.

Guardiola was also complimentary of the midfielder, with the City manager saying that the experience will prove ‘good for his future’ despite his ‘shy’ start to his debut.

“He started a little bit shy, but that’s normal. He is an incredible young lad in the training sessions. Since two months ago he has showed us a lot of things. He has a good future in this club.

“He is a humble guy. He is a guy with incredible finishing, like Phil. He had his chance to score. His debut in this competition against a Premier League side, it will be good for his future.

“Again, thank you to the Academy for these players. We get players from the Academy’s work.”

Read: Why Solskjaer’s legendary status is becoming a serious problem at Manchester United