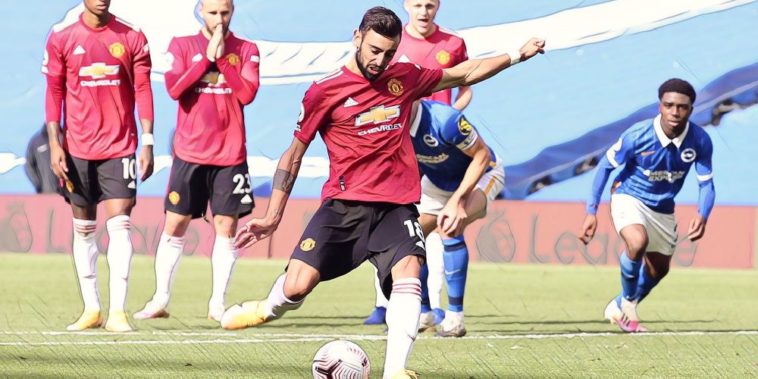 Bruno Fernandes was the hero for Manchester United as the club secured a late, late win at Brighton last weekend, the midfielder converting from the penalty spot in the 10th minute of stoppage time to secure his side a precious three points at the Amex Stadium.

Manchester United are no strangers to scoring late goals, but incredibly this was the latest goal scored by the Red Devils in the Premier League and amongst the latest ever registered in the history of the division, United finding a way in ‘Ole Time’ to get their season up and running on the South Coast.

A recent inclusion to this list, Che Adams entered the top five for late Premier League goals courtesy of his effort against Bournemouth earlier this year, the forward firing home in the eighth minute of stoppage-time to seal victory for Southampton.

Lengthy VAR checks over a decision to award the Saints a penalty and later disallow a goal from Bournemouth’s Sam Surridge led to the lengthy added time, Adams putting the gloss on a 2-0 win for the visitors against their relegation-threatened opponents.

The Saints’ win left Bournemouth on the brink, the Cherries dropping into the Championship on the final day of the season after a five-season spell in the Premier League.

Steve Kean’s ill-fated reign at Blackburn Rovers lasted just that little bit longer following a dramatic equaliser from Yakubu in 2011, the forward firing home from the penalty spot in the ninth minute of stoppage time to secure a point at fellow strugglers Wigan.

The manager had arrived amid a chorus of protests asking him to resign and his fortunes only worsened as David Dunn was sent off just minutes into the second half, his side trailing as the game headed into added time as goalkeeper Paul Robinson was launched forward in dramatic style.

The goalkeeper’s presence caused chaos in the Wigan box and he won a penalty after being caught on the head by David Jones’ boot, the late pressure falling on the broad shoulders of Nigeria international Yakubu.

The ‘Yak’ calmly rolled the ball home to make the score 3-3, providing a stay of execution for Kean who somehow lasted a further 10 months despite his role in Blackburn’s relegation that season.

Bruno Fernandes was Manchester United‘s ‘Get Out of Jail Free card’ from the penalty spot once more following an incident-packed clash with Brighton at the Amex Stadium, emphatically dispatching his spot-kick to score the latest Premier League goal in almost nine years.

The goal sealed three points for United in a clash they were more than fortunate to win, Brighton hitting the woodwork on a record five occasions before grabbing a more than deserved equaliser in the 95th minute.

The referee had blown the final whistle, only for VAR to award a penalty for a clear handball…

There proved to be late heartbreak for the Seagulls, however, as Harry Maguire’s header struck the outstretched arm of Neil Maupay, Fernandes keeping his cool from the spot to score United’s latest goal of the Premier League era.

Chelsea made an unconvincing start to life under Andre Villas-Boas and needed two late goals to secure a 3-1 victory over Norwich in their third league fixture of the Portuguese’s reign, Juan Mata scoring his side’s third as the clock ticked past the 100th minute.

Jose Bosingwa had opened the scoring at Stamford Bridge with a stunning strike before Grant Holt equalised for the visitors, though there was lengthy period of time added on following a nasty head injury suffered by Didier Drogba.

The Ivorian was left motionless and was stretchered from the field following a collision with goalkeeper John Ruddy, before Frank Lampard restored Chelsea’s lead from the penalty spot with eight minutes of normal time remaining.

Mata then scored a late third to make sure of the three points, just the second Premier League goal ever scored after 10 additional minutes of stoppage time.

Liverpool left Arsenal’s title hopes hanging by a thread following a remarkable finish to this clash at the Emirates, a contest seemingly heading towards a goalless draw bursting into life in a frenetic final few minutes.

Robin van Persie thought he had won the game for Arsenal after converting a penalty in the eighth minute of stoppage time to open the scoring, the lengthy added period coming after Jamie Carragher sustained a head injury following a collision with teammate Jon Flanagan.

There proved to be yet more drama, however, as Dirk Kuyt scored the latest goal in the history of the Premier League four minutes later, Liverpool awarded a penalty of their own following a clumsy challenge from Emmanuel Eboue.

The Dutchman stepped up to fire home from the spot, the two late penalties providing an extraordinary finish in north London.